My mouth, where you put discarded things:
rust-icicle broken from a car-body,
dark apron, its pocket still heavy with coins,
fingerpainting in purple, black and blue.

I swallowed paper names
your tongue stumbled, forgot
and spat, mispronounced, at the air.

Wore down my teeth chewing cast-off
clothing, hoping saliva would dissolve
your smell, a dusting of cells.

My mouth, your unwilling oubliette:
tonguing broken aquarium glass,
the taste of ink licked from salt palms,
my lips mottled by storm clouds.

I eat your leftovers. 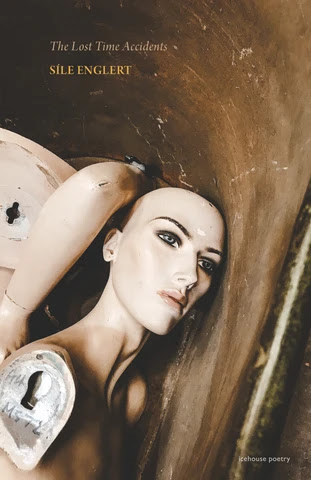 London, Ontario poet and editor Síle Englert’s full-length debut is the poetry collection The Lost Time Accidents (Fredericton NB: Icehouse/Goose Lane Editions, 2021), a collection of poems composed via curious dream-like narratives. Writing on the late American actor Buddy Ebsen (The Beverly Hillbillies), elephants, PT Barnam, Nikolas Tesla, lost pennies or Voyager 1, Englert’s poems exist as echoes of folk tales or fables, offering her takes that thread a particular truth or deep wisdom through its narrative quilt. Hers is a surrealism that enters the room like smoke, providing a quiet use of space and rhythm. “Shaking / loose infinite tectonic layers of minutes. Everything / that never happened,” she writes, as part of “Give Us Our Eleven Days,” “pulled with its threads still / dangling like a weed ripped from the ground, roots / and all.”

Set in three numbered sections, her short lyrics exist as elegies for lost items and moments, and of vulnerabilities, those that sit just under the skin beyond our control, as well as those ways in which we need to remain open. She writes her lyrics nearly as a museum of antique objects—mannequins, trains and even those lost pennies—attempting to carry forth the lessons and set aside possibilities such objects provide, attentive to their beauty and continued value. As part of the quartet “Requiem for Toys,” she offers this to end the first of these poems, “Dummy,” writing: “And he knew what it was to disappear, / to be a thing that is a threat because it speaks.” Englert’s poems articulate the feeling of being adrift, and attempting to, once again, find anchor; attempting to connect, and re-connect what has been untethered. As she writes as part of the poem “Voyager 1 Sings to Her Sister”:

What does interstellar mean?

It means the space between stars,
where we are only what we remember.
It means trying to measure darkness
with no dawn coming.