Sarah Mangold, Her Wilderness Will Be Her Manners

They put our body
into the text

and there we are
made to wonder

how far in
we have gone

Make us exclaim
in the space

explicit instructions
how to look natural

I am very pleased to finally see Washington State poet Sarah Mangold’s latest, Her Wilderness Will Be Her Manners (New York NY: Fordham University Press, 2021). I was first made aware of this particular project back in 2014, through her stunning chapbook The Goddess Can Be Recognized By Her Step (Dusie, February 2014) [see my review of such here], and had long been eager to see how the full project might eventually play out. The author of numerous other chapbooks over the years (including multiple by above/ground press, two of which—Birds I Recall and A Copyist, an Astronomer, and a Calendar Expert—also fall into this new collection), Her Wilderness Will Be Her Manners is Mangold’s fourth full-length collection, following Household Mechanics (New Issues, 2002), Electrical Theories of Femininity (Black Radish Books, 2015) [see my review of such here] and Giraffes of Devotion (Tucson AZ: Kore Press, 2016) [see my review of such here]. The winner of the “Poets Out Loud Prize,” and published as such, contest judge Cynthia Hogue offers a meaty foreword to the new work, writing:

Reading the lines above, drawn from Sarah Mangold’s austere, book-length meditation on gender, art, and natural history, I am struck again by what compels me about this collection. The volume radiates with incisive insight. The power of its “arrested moments,” the collages of thought and image in this lyric long poem, is cumulative. Here and there among passages of careful erasure and resonant assemblage are direct statements, scraps of fact that Mangold has mined from her material, which leap out at a reader, fresh and startling. She spent years researching natural history texts, seeking traces of early women naturalists whose record of works had been erased. Since historians do not “see women,” as Mangold observes at one point, we must ourselves seek what has been overlooked, in order to comprehend how gender affects perspectives on nature and history. 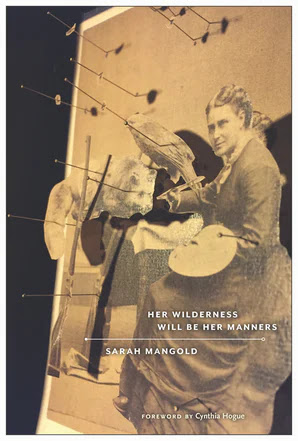 Mangold’s work has long favoured the expansive, book-length project constructed out of lyric fragments and the spaces that surround them, assembling scraps and silences, and both notebook and archival salvage. Through this new collection, Mangold explores the lost research of a variety of scientists across natural history texts, writing the spaces around and through the work of women in those fields so often ignored. “What interested me was / the way ladies survive / as acknowledgments,” she writes early on in the collection, “in other people’s prefaces / the way historians will not / see women in the museum / unless she seeks them out / a catalogue of eighty thousand cards / on the family Gramineae [.]” The blurb for the book by Rae Armantrout suggests this work has a kinship to that of the work of Susan Howe, but I’d suggest there’s almost an element of Lorine Niedecker as well, albeit through Niedecker’s salvaging/repurposing her own research (as opposed to another’s) into the carved extractions that became her Lake Superior (1968). Still, both projects employ the light touch and the deep foundation, writing out an extended structure of seemingly-loose strands of lyrics, floating above an incredibly solid earth. As she writes to open her extensive notes at the back of the collection (which includes multiple bibliographical sources): “The language in this poem was collected through conversations with books, and the process of wreading, erasure, and collage. A list of source texts, infatuations, and inspirations is included here, with particular indebtedness to Rachel Polquin’s The Breathless Zoo, found by chance at Powell’s Books.”

Mangold’s purpose through unfurling elements of these historical texts is one not only of salvage but reclamation, offered as lyric assemblage of a document to acknowledge so much work that had otherwise been ignored. “In the Department of Birds,” she writes, “we welcome / the possible. Accuracy is more-or-less // proposition. Low down and close up. / An architect in need of work. During // the next five years Mrs. Morrill painted / African landscapes never seen. To create // a message for the future. To prepare / for her coming tasks.” She writes as salvage, but offers her poems not as pure documents, but as quilts composed from the language of her chosen texts, offering up possibilities around and through a variety of texts utilizing scientific jargon and description, repurposed as a kind of lyric examination of these women and their works. In her December 2016 “Spotlight,” writing on the manuscript which was then very much still in-progress, she offered up a pastoral that is concurrently anti-pastoral, writing:

I have always disliked nature writing. Its pervasive gendered and romantic notions of nature as the “other” seemed to include me as “other.” As a poet living in the Pacific Northwest, I am often asked if Nature inspires my poems — only to be met with sighs of disbelief when I say I mostly write in conversation with what I am reading and about how women appear or are missing from history. As a response to nature writing, I found myself mining natural history texts and taxidermy manuals from the 1800s in an attempt to meld the gendered reveries typically found in the pastoral frame with the actual bodies of women, animals and landscape.