Since each hour’s a sickle with a fighting chance,
I tested fate’s etiquette

and flattered the cat’s mercy.

I was thinking of the grass’s traffic
as I tipped the trap over
between thin shoulder and scissoring headlights,
near park gates
where the mouse’s paws typed
their way
through a looping scribble of tomato vines,

while all that hour, the sun’s seeping bleach
became a chandelier,
and I turned for home, the morning’s alarms,
the news, wage,
and email, no less

no more. (“I CARRY A MOUSE TO THE PARK BESIDE THE HIGHWAY”) 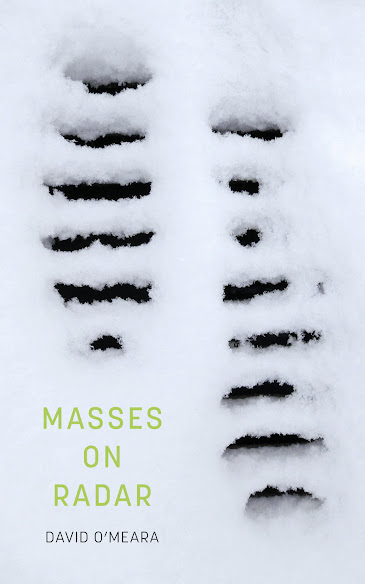 Ottawa poet and editor David O’Meara’s fifth full-length poetry title is Masses on Radar (Toronto ON: Coach House Books, 2021), following his prior collections Storm still (Ottawa ON: Carleton University Press/Harbinger Series, 1999), The Vicinity (London ON: Brick Books, 2003), Noble Gas, Penny Black (Brick Books, 2008) [see my review of such here] and A Pretty Sight (Toronto ON: Coach House Books, 2013) [see my review of such here]. In Masses on Radar, O’Meara continues his trajectory of meditative examinations and first-person expositions, writing on matters domestic and immediate, from social media and Pizza Shark to references to their household Roomba, and to W.H. Auden. “Contra the self-help guide: sweat the small stuff and don’t / think outside the box.” he writes, to open the poem “VIGOUR.” “Think inside the house, its brick / and Tyvek wrap, double-glazed windows, screen // doors, and gable flashing.”

He has long been known as a poet of earnest contemplation, without formal showiness or unnecessary flourish. O’Meara writes on his immediate, blending the external with more philosophical concerns, composing a lyric that seeks an order through the chaos and noise, seeking solace in putting each possibility into its place. Writing of travel, home and drone strikes, there is a precision, and even a carefulness, to his exploration. As he writes as part of “I COLLECT THE FIVE THOUSAND RIBS OF JESUS CHRIST”: “Rot makes havoc / with our molecules; blood / fluxes back to powder, encrusting the ampoule.” He writes of visiting his since-late father in hospital in the poem “I PARK THE CAR AND CLIMB THREE FLIGHTS OF STAIRS,” a piece made more powerful through such pure description, able to articulate a heightened emotion through holding such back. “Don’t die too much right now / near the oxygen mask and bendable straws.” he writes, as part of the poem’s fourth section. He manages to pack an enormous churn of complicated feeling through a lyric concurrently light, and dense with detail, as the poem opens:

In this pantomime of normal: ticking
engine, the numbered
stub on the dash,
branches profiled with hospital
light poles.
I cross the lot
to your bedside, halfway through
the pop-up book
of my ad-hoc adulthood.

Just prior to lockdown, O’Meara mentioned in conversation that a handful of poems included in this eventual full-length collection were each titled “Autobiography,” all of which were standalone poems, composed to interact with each other, but neither as suite or grouping. At some point during the editorial process, each of these poems became retitled, and one can still see the echo of the title throughout the collection: nearly two dozen fourteen-lined sonnets scattered between and around the longer pieces. To be aware of that prior title makes for curious reading, such as the poem “WHIR,” which originally appeared via The Walrus as “Autobiography,” writing: “Aimless, couch- // surfing castaway, I thought / youth the best refusal and the great hope. / Jeff obsessed over how a spider gets its web / across the considerable distance between rail post // and magnolia.” Is there a difference to what the story is and what the story suggests, or might be about? Otherwise, most of the remaining poems in the collection exist as structural counterpoint to the density of the sonnet form, allowing his narratives a bit more air, rhythm and space to breathe across a longer distance, such as the poem “I REPLACE KOROTKI AT THE WEATHER STATION ON THE / BARENTS SEA,” a four-part sequence that includes, as its third section:

On duckboards of permafrost,
across sedge and tundra grass,
in hip boots, I heave
a tidal marker to shore. Bergs

stall in the opal monochrome.
It stays like so,
all squint

and radar, January gust spanking
the back window. I write my life is wind
and post the note
to nowhere

In the centre of the collection, holding the two sides of his structures together (and thus the collection, arguably) is the fourteen-part (not including “opener”) sonnet sequence “THE MOIRAI,” written in memoriam to his friend, the late poet Elise Partridge (1958-2015). In this sequence-section, O’Meara captures a particular formal density against a longer, extended thought, balancing nicely the carved diamond with an extended breath, writing: “To gather all I saw even as it fell behind / I scanned the harbour, parsing every crest // and trough of surf, like stressed and unstressed / syllables scribbling the tide’s cursive, underlined // by a sudden shore.”

There is a curious way in which O’Meara approaches the lyric and narrative “I,” allowing the questions posed to be more important than a narrative intrusion that exists almost as distraction, but also positioned to allow the question more weight, through the narrator’s active presence. O’Meara composes poems around contemplation and experience, and the points at which the narrator can’t not become entangled in what is being witnessed; he begins with a distance, but, as he writes as part of the opening poem, “I INVITE BAD LUCK AND RUIN”: “I didn’t read the signs / that hang on a breeze, / through the portents // have told me that touching anything / would mean / I’d become part of it.”

Posted by rob mclennan at 8:31 AM
Labels: Brick Books, David O'Meara, The Walrus