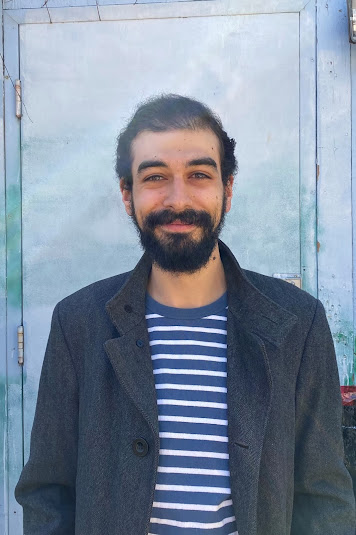 Bardia Sinaee was born in Tehran, Iran, and currently lives in Toronto. His poems have appeared in magazines across Canada and in several editions of Best Canadian Poetry. He holds an MFA from the University of Guelph, where he was nominated for the Governor General’s Gold Medal. His first book is Intruder (House of Anansi, 2021).

My first chapbook, published ten years ago by In/Words, gave me some of what I wanted, which was validation, and a lot of what I needed, which was friends. At the time, In/Words ran a magazine, a micro-press, weekly writers’ circles and monthly open mics. My poems were all over the place, but more importantly they emerged out of a constellation of friendships and rituals that gave me a social context. I’d never been truly close to anybody after my family and I left Iran. In/Words changed that, and the chapbook was a token of that change. My first full-length book, Intruder, emerged out of a different set of circumstances: precarity, displacement, cancer, fascism, COVID, all the fun stuff.

I wrote some poems in high school, and worked on poetry, fiction and journalism as an undergrad. At some point in those early days, I found I wasn’t interested in images or characters or narratives as much as I was interested in working with sentences. The sentence is a foundational and infinitely pliable structural unit for building meaning. So I spent ten years using sentences to make poems, resulting in Intruder. More recently I’ve also enjoyed creating characters, settings and events, which is to say writing fiction.

I like to do one thing at a time. A piece will start quickly, but fleshing it out is usually a slow process. I also revise as I write — for better or worse the two things are inseparable for me — and this slows me down, but it means the first completed draft already includes significant revisions. I like to jot down notes, though I rarely refer back to them. I don’t really work on projects.

I’m drawn to language without provenance. A voice or a phrase gets stuck in my head, an inexplicable string of words appended to an idle thought, or something I misheard on the bus. I take that fragment of language and roll it along the floor of my mind until it accumulates other detritus. I try to invoke the voice that would produce such speech and see what else it says. I pair it with unrelated fragments. All of these approaches necessarily incorporate the world into the poem. I go through phases. Eventually I collect the poems into a chapbook or book so I can share them with people.

I enjoy doing readings. Of course the best part of a reading isn’t the reading; it’s the part after the poet finally shuts up, when you get to catch up with people and joke around and be part of a loud, lively community. The readings themselves aren’t part of my creative process, but that communal feeling is invaluable.

I suppose the only absolute obligation any writer has is to write. The “larger culture” seems more ravenous than ever in its propensity for recuperating and nullifying any opposition to it. Corporations exploiting slave labour in Asia and Africa underwrite arts organizations across North America. Weapons manufacturers and oil companies publicly vow to advance racial justice. You have to build a wall around yourself to withstand this barrage of hypocrisy, to live and work, and you become atomized. I hope writers can help alleviate people’s alienation from one another. They’ve certainly helped me.

Both. While I try to be a thoughtful writer, I make a million little decisions that I’m not entirely conscious of. My editor for Intruder, Kevin Connolly, was very good at subtly making me conscious of what I was doing. That was essential. The difficulty of editing lies in making the work more considered, more refined, without extinguishing the spontaneous spirit and sense of play that guided it into being. But ultimately it’s art, not air-traffic control, so if you make a bad call it’s not a tragedy.

Epictetus said, “If you want to be a writer, write.” This is helpful advice if you take it very literally. That is, if you want to be a writer, get in the habit of writing anything at all. You don’t have to pour your heart out. Take a look outside and write down what you see, like someone sketching a bowl of fruit. How do you approach it? Top to bottom? Left to right? Pick a news story and situate yourself in it. What do you hear, smell, feel? Get in the habit of considering these questions. This won’t necessarily produce great writing, but the goal is to exercise coordination between different parts of your brain. Then when a great idea comes along, when your heart is ready to burst, you will have the skills to write about it.

It depends on my work schedule, which right now is largely out of my hands. I can’t afford to turn down work. If I don’t get many classes to teach, I sit down and write as much as I can. If I’m teaching and tutoring a lot, I usually don’t have the time or mental energy to sit at my desk and treat writing like serious labour, but I’ll try to get in a state of mind more conducive to writing, such as by going for a walk.

I like to read and I like to walk around outside. Neither one is always generative, but they’re both enjoyable.

Yes, all of those things. Plus economics.

There are too many important writers to name. Some writers I’ve enjoyed lately are Edgar Allan Poe, Simone Weil and Donald Barthelme.

I would love to see the Pacific Ocean.

I would have liked to be an ornithologist. People who don’t like birds can go to hell.

Writing gives my life meaning. It helped me process my cancer diagnosis and years of treatment, it’s a means for apprehending the simultaneously life-giving and alienating conditions of modernity into which I was born — and it’s fun. Writing is no substitute for love or human interaction, but I haven’t found another pursuit from which I derive so much spiritual gratification.

Stories and poems. If you’re reading this, I hope you’ll also read my book.