How can you tell if someone’s looking at you, he wondered. That I’ve never been able to figure out. A 500 yard stare, a friend of his described it, but who can see that far? The person walking by on the sidewalk, he looks at her but her eyes point straight forward, fixedly, as if she were told to do so, if you could say that eyes point anywhere, but people do anyway, don’t they? 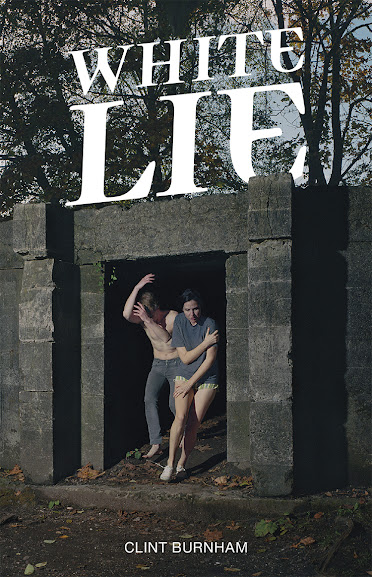 It has been a while since a new title by Vancouver poet, fiction writer and critic Clint Burnham appeared, so it is good to go through his latest, White Lie (Vancouver BC: Anvil Press, 2021), a collection of one hundred and twenty-nine short “postcard” fictions. Burnham is the author of multiple books and chapbooks of poetry, fiction and criticism over the past thirty years, including Be Labour Reading (Toronto ON: ECW Press, 1997), The Benjamin Sonnets (Toronto ON: BookThug, 2009) [see my review of such here], The Only Poetry That Matters: Reading the Kootenay School of Writing (Vancouver BC: Arsenal Pulp Press, 2011) [see my review of such here] and Pound @ Guantánamo : 20 Poems: 2005-2014 (Vancouver, BC: Talonbooks, 2016) [see my review of such here]. Self-described as “part travelogue, part autofiction,” the micro-fictions of White Lie accumulate to suggest a linearity and narrative trajectory, even through their individual self-containments: they could be read in the order in which they are set, or read more randomly. With their individual, accumulating “stories” as opposed to individual sections or chapters, they feel slightly more narratively untethered than, say, the novels of Richard Brautigan or Dany Laferrière [see my review of his latest book here], but there is a thread here that Burnham lays out, if one chooses to follow it (perhaps a better comparison might be to Joy Williams’ 2016 collection 99 Stories of God [see my review of such here]). There might even be a particular and curious narrative thread one could follow by simply reading only the first sentence of every piece, and ignoring all else.

He kicked her between the legs and left her outside his door. Two or three days later he was out on bail and asked me for a letter. I asked him what for and he said it was for the hearing. I phoned his lawyer but his lawyer wouldn’t tell me if he was his lawyer or not. When I complained to my boss about this she said they can’t. The next week I saw him he brough a letter from his lawyer, it was printed out from a dot-matrix printer, the edges of the pages were a bit shredded from where the tractor rolls had been ripped off. That Christmas I gave him some socks for him and his son. When I’d see him again over the years, he grew a beard, it was curly and white, giving him a Santa with a jutting jaw look.

It is interesting to see the ways his prose works, and one can see the echoes of those small press roots he formed back in the 1980s in Toronto, in the proximity of writers such as Stuart Ross and Gary Barwin [he wrote of some of those days and connections here]. The prose is immediate, and his sentences propel his narratives, although quite often stop short of giving everything away. There is a straightforwardness and directness that plays off a surreal edge, one that begins to feel akin to a dream or a half-buried memory.