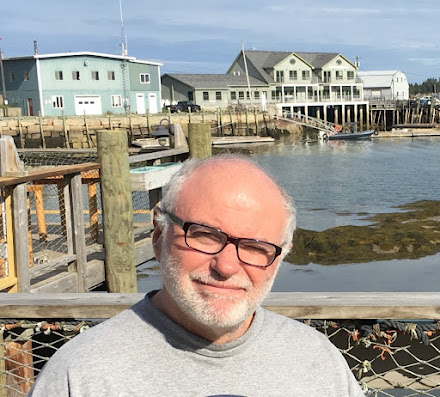 Paul Nemser grew up in Portland, Oregon, where he fell in love with poetry while reading in the storage room in back of his family's tool store. He received an AB from Harvard College where he studied with Robert Lowell and Elizabeth Bishop, and an MFA in Writing from Columbia University School of the Arts where he studied with Stanley Kunitz and many others. He also received a JD from Boston University School of Law. His love of reading and writing poetry has continued throughout his life. Beside his new book, A Thousand Curves (Red Mountain Press, 2021), his book Taurus won the 2011 New American Poetry Prize from New American Press, and his chapbook Tales Of The Tetragrammaton (2014) was published by Mayapple Press. His poems appear widely in magazines, including AGNI, Beloit Poetry Journal, The Kenyon Review, London Review of Books, The Missouri Review, and Plume. He lives with his wife Rebecca in Cambridge, Massachusetts and Harborside, Maine.

1 - How did your first book or chapbook change your life? How does your most pursued recent work compare to your previous? How does it feel different?

Publishing my first book, Taurus, which won the New American Poetry Prize and appeared in 2013.    fulfilled a wish that I have had since childhood to publish a book of poetry.  Taurus is a wild retelling of the Europa myth.  A bull-gargoyle in St. Petersburg, Russia falls in love with a mysterious woman named Europa.  There is a manic, jagged dynamism to their love story.   Writing Taurus stretched my imagination far outside of its usual territory. The book changed my life by placing me inside fantastic personae, human and non-human.

My new book, A Thousand Curves, is a collection of poems written over a lifetime of writing poems. There is no larger narrative, there is no single setting, and there are no long poems. But the poems are lyrics that strive to capture a moment or a day, to make the present jump off the page.  Many of the poems try to summon someone or something—another human being, a scene from nature or travel.  Some of the poems have an ominous undertone.  I am interested in creation, connection, and decay.

My mother read me poems from my early childhood onward.  She started with nursery rhymes and moved on from there.  Both of my parents loved word play—nicknaming, punning,  rhyming, playing  word games.  I grew up with a sense that language was meaningful, fun, and malleable.  And by my teens, I believed that ordinary language wasn’t always adequate to express what I wanted to say, but poetry was.

Once in a while, a poem comes to me almost fully formed, but more often a poem takes me months or years to finish. I write the first draft, do some editing, put the draft away, and return to it again and again.

A poem usually begins for me in a dreamlike, uncritical state of mind.  The idea for the poem typically is inchoate on arrival. It could come from anywhere. Sometimes the idea drifts in like a jellyfish, sometimes it hits my cortex like lightning.

The poems in A Thousand Curves came from the short pieces that I work and rework almost daily, sometimes for years. Taurus and my chapbook Tales of the Tetragrammaton were books from the beginning.

I work for authenticity and wildness. I try to get behind the quotidian and  touch underlying meanings.  The music of language is central.  My poems explore love awakened and enduring, permanence and transience, life and death.

A poet should find ways to bring the reader into touch with other places, other lives, other hearts. The poet expresses truth as best he or she can, often in a language that is extraordinary.   Poems can create new ways of seeing and being.  They can break through ossified structures.  They can enlighten.

I have found it helpful to be in writer’s workshops and to hear people’s reactions to my work. This can be difficult, but also essential. It pushes me to keep writing. I would add that Susan Gardner, my editor and publisher for A Thousand Curves, has been great to work with.

Regarding poetry:  In class in college, Robert Lowell said, “Many people can be good poets. Only a few can be great poets.  But you can’t be a great poet unless you try.”  For better and worse, that charge to be daring has stuck with me.

Regarding life:  Early in my marriage, I said to my wife, “With my luck…”. something would not work out for me. And she said, “What do you mean, ‘with my luck’?  You married me, and I’ve always had good luck. So will you.”  It was almost 50 years ago that she said this.  From the moment I learned to believe in my luck, I became happier.

Regarding a career:  my teacher Stanley Kunitz advised me to go into a career that did not involve poetry. He said that what I would experience in that other field would feed my writing.  Then I told him about my life circumstances and my lack of money, and I asked him what I should do. He looked up toward the sky for a full minute, looked back at me, and said “the law.”

I write at all times of the day or night. There is no routine. I practiced law for 40 years and learned to find writing time in the interstices of work life and family life.

I read poetry.  I walk by the ocean.  And I go swimming.

You can find all four of those in my poems.  Water in all its forms appears in and influences my work—weather, sea, rivers, lakes, falls.  I enjoy reading poems that are or approximate songs, and I have written in song forms.  I listen to music all the time, and the music moves me to write.  I often read about science and mathematics.  In childhood and teen years, I learned a fair amount of astronomy, and celestial phenomena appear in many of my poems.  Visual art from Japan has been a big influence—stripping an image to essentials.  The huge sweep, intense detail, and choice of foreground and background  in the work of  Pieter Bruegel the Elder is an ideal that I admire, as is Leonardo da Vinci’s focus, as if he were another kind of being than the rest of us.

I love ancient writing, such as Greek, Chinese, Indian, and Japanese sources, and the Bible and Midrash.   I love Dante, Child ballads, early Elizabethans, Cervantes, Shakespeare, Donne, Marvell, Milton, Goethe, Schiller, Buechner, Blake and the other great English Romantic poets, Dickinson, Whitman, Tennyson, Browning, Hopkins, Yeats.  In the 20th and 21st centuries, the list of writers to whom I return would be enormous, but I will mention Mandelstam, Akhmatova, Rilke, Kafka, Lorca, Vallejo, Benjamin, Brecht, Celan, Drummond, Montale, and Neruda. I also read young writers publishing poems in English in contemporary journals.

Be a wise old man.

I practiced law through most of my adult life, and I enjoyed it. Persuasion, argument, and interpretation have their place in both law and poetry.  Law tends to be more structured and rational—or seeks to create an appearance of rationality—whereas poetry usually works overtly on the feelings.  But law works on the feelings to motivate agreement, law is about states of mind, and law seeks to align with people’s “sense of justice.”  Similarly, structure is a critical feature of poetry, and the work of great poets such as Shakespeare and Milton is full of apparently rational argument. If I were not writing poetry, I probably would have ended up in the law.

Writing has been more of a compulsion than a wholly free choice.

I just finished reading Shakespeare’s Henry IV, Part I, and I recently saw Steve McQueen’s Small Axe.  The Shakespeare play impressed me not only with its witty, vital language in the mouths of different characters, but also the repeated contrasts between the open and the hidden, explicitness and disguise.   The McQueen series has many linked segments that give a powerful picture of the Caribbean community in London in the 1970’s, the connectedness of the community and the obstacles and injustices they faced.  I particularly admired the series’s use of music.

Poems about my current spiritual and physical situation.  My life changed recently because of illness, and I am exploring ways to write about it.