Rosmarie Waldrop, The Nick of Time

Meanwhile you cling to your book. Do the words still float you to Prospero’s island? Or drop, separate coins, bringing no dew from the Bermudas? I put my hope in the fundamental difference between local time and time at a distance. Make a show of clearly contoured identity, no matter if you can connect it to family structure. A stable body with only occasional modification. Rather than molecules and feelings in violent agitation. Let alone quanta dissolving into vibrations of light. You stare at your left little finger, which is crooked. (“BITS AND PIECES”) 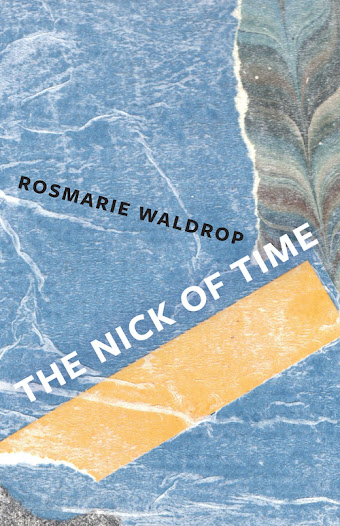 The latest from the legendary German-born American poet, editor, translator and publisher Rosmarie Waldrop is The Nick of Time (New York NY: New Directions, 2021), a collection self-described as: “Ten years in the making, Waldrop’s phenomenally beautiful new collection explores the felt nature of existence as well as gravity and velocity, the second hemisphere of time, mortality and aging, language and immigration, a Chinese primer, the artist Hannah Höch, and dwarf stars.” The author of numerous titles over the past five decades-plus, this is her first full-length collection of new work since Driven to Abstraction (New Directions, 2010), although the past decade has also seen the publication of multiple chapbooks, as well as the impressive (and, I dare say, essential) volumes Gap Gardening: selected poems (New Directions, 2016) [see my review of such here] and Rosmarie and Keith Waldrop: Keeping / the window open: Interviews, statements, alarms, excursions, edited by Ben Lerner, with an introduction by Aaron Kunin (Wave Books, 2019) [see my review of such here].

The Nick of Time is a book of mortalities, writing her book-length suite of prose poem sequences and short bursts, each of which are constructed as collages of strands that form new quilts of meaning. “The difference of our bodies makes for different velocities.” she writes, as part of the final poem in the collection, “AGING,” the final poem of the suite “REHEARSING THE SYMPTOMS,” “But gravity / is always attractive, and my higher speed. Cannot outrun the inner / fright we seem made of. Though I gesticulate broadly. As in a silent / movie. Running after the train, waving goodbye.” As one could speak of her writing at any point across her lengthy publishing history, Waldrop writes on language, reading and perception, and the ways through which we think of the relationships between and amid meaning. The poems that shape to form The Nick of Time also incorporate and investigate concepts such as America, mortality and aging, crafting each poem as a furthering of her decades-long investigations into language, theory and philosophy. As she writes as the third of the eight-part “INTERVAL AND HIGH TIME”:

Am I one of those immigrants who never discover America? Never truly arrive? Am I trying to reconstruct the places I left behind with French wine and books from Germany? Though words like raccoon, skunk, hickory, Narragansett, Pawtucket, and Pawcutack. Have entered my vocabulary. Am I focused on the wake behind the boat that brought me rather than its destination? But you, through from heartland Kansas, are not all forward-looking either. You see a shimmer of sun on water. And don’t go build a boat.

As part of her conversation around mortality, the poem-sections are interspersed with a string of single, self-contained “Laments,” each composed for late friends and literary contemporaries: Barbara Guest, Robert Creeley, Anne-Marie Albiach, Michael Gizzi and Edmond Jabès. “My book is the fall of a body, you said.” she writes, to open “A COMLICATION OF GRAVITY,” her “Lament for Anne-Marie Albiach, 1937-2012,” “Yours, fragile, premeditated. / Into the depth of the page, where mysteries might still speak. And / time passes with infinite resources of slowness and is its own project / of erasure.” Through The Nick of Time, Waldrop writes more overtly of mortality, but her writing has always been aware of not only the passage of time, but time’s measure, cadence and relation. In an interview conducted by Matthew Cooperman in 2006 for Denver Quarterly (an excerpt of which is included in Keeping / the window open: Interviews, statements, alarms, excursions), she responds:

In language, it is the space between words that lets us recognize the words as words. And in poetry, it is the interval, the empty space from one line ot the next that defines the verse. It sets the rhythm and also makes visible the nothing, the not-said, against which we pit our words. For the fraction of a moment, this void stops everything. It suspends the assurance of statement to reintroduce uncertainty, doubt, potential. It makes visible the possibility of language, of representation, of music.

There is such a music to her writing, one that (in recent conversation) Christine McNair suggested was in part due to the fact of Waldrop composing English-language sentences and phrases utilizing German-language structures (as German was Waldrop’s first language, naturally), something that might not have occurred to omnilingual me. Perhaps in no small part to her existing within that space between and amid multiple languages (both through writing in English as someone raised in German, or her lengthy career as a translator), Waldrop’s work has always been attuned to the minutae of how language is structured and constructed, allowing the collisions that emerge from unexpected assemblages and phrasing. How she is saying impacts and reveals the what of her communication, propelling the possibilities of language across her lyrically-dense sentences. And through her longer prose sequences, she pulls at the threads of expected meaning, furthering a thought and a line out into such wonderful spaces. As she writes as part thirteen of the nineteen part poem “WHITE IS A COLOR”: “I make random forays. From your gravitational pull. As if there were / paths out of orbit. As if not every second were unraveled. As if I were / not locked in lost for words. You cling to your bed as if it were the / frame you’re painted into.”