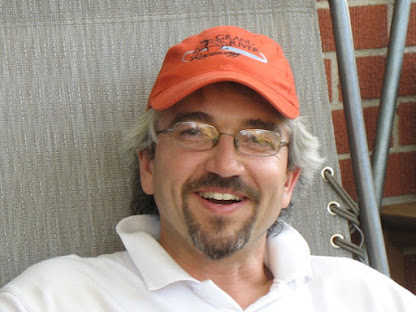 Sean McCammon grew up rambling the forests and marshes of the Rideau River near Ottawa. He graduated with a BA in English and philosophy from Queen’s University, and taught English in Japan in the early nineties. After getting his teaching degree, Sean moved to Kitchener-Waterloo where he has delivered outdoor education programs for the school board for the last 20 years. Through his job, he has become a beekeeper, a maple syrup producer, and a cross-country skier. He is also a budding songwriter and has released an album of songs about springtime in the sugar bush. Sean’s next musical project about beekeeping is tentatively titled A Bee CD. His wife Kelly works as a diabetes educator and is a big supporter of Sean' creative pursuits. Their son, Sawyer, is currently enrolled in the aviation program at the University of Waterloo. His debut novel, Outside, appeared earlier this year with New Star Books.

I am getting somewhat near the end of my teaching career, and discovering that writing could be enjoyable - and that maybe I could have some success with it – has shown me a path forward for the day when I’m not hanging out with nine-year-olds all week.

How does your most recent work compare to your previous? How does it feel different?

I’ve never taken on a novel before. I’ve written lots of poetry, lots of songs. With a novel, you have to put a lot of work into the emotional pay-offs. You can’t get a reader to care about what happens to your characters in the first chapter.

I took six months off from my outdoor education job to work on some musical projects. I also had some poems I thought I might package up. Various creative initiatives. And one day during my sabbatical I sat down to start my novel. It wasn’t painful! So I wrote the next day too. It wasn’t a matter of picking fiction over something else, it was just a matter of finding time to fit that part in.

I can’t find the time or energy to write and also teach. So most of my writing happens when I’m not working. I wrote Outside over a four-year period, with a couple of leaves-of-absence in there. I don’t work from notes. I think through plot developments and character interactions before falling asleep at night. Once I’ve got a clear picture of what a setting looks like, or how a character’s personality is shaped, writing comes easier.

I had Outside all planned out before I started writing. I know there are some authors who write without knowing where the story will take them, but I had all of the plot elements in place before I started. My second novel is all mapped out in my head. It’s just a matter of finding time to craft ten thousand sentences.

I like writers who specialize in reading essays. Stuart McLean, David Sedaris. That works. But part of the magic of art is that the audience fills in parts that are missing - usually with stuff that is better than what the creator might have added. I can’t imagine that my voice would make the impact of the words any better. A reading can help an author connect with his or her audience, but I don’t think hearing the words spoken by the author adds anything to the experience of reading the novel.

In some ways I am using the novel as a vehicle to explore certain questions. When I asked my initial editor to describe back to me what Outside was about, looking for a precis, or an elevator pitch, she said, “It’s really about the meaning of life.” Great! How do I describe that in a query letter?

A few years ago, I released a CD of songs about maple syrup-making that people really connected with. But they didn’t like the songs because they necessarily related to the experience of making maple syrup. I was just using the topic of maple syrup-making to express more universal feelings of joy, frustration, camaraderie, etc. In some ways, that is what my novel is doing - using a fictional story to convey shared human emotions.

I think the role of the writer is the same as it has always been - to connect with another person in a way that makes them feel less alone in the world. A book is a wink to another human being that says, “We’re in this together.”

I suppose there are difficult editors in the world, but my experience so far has been great. I’ve felt that the editors I’ve worked with have liked my work. That make you feel good going forward with them. They are essential, though. We all have blind spots.

Kurt Vonnegut advised writers to be sadists, forcing likeable characters to deal with great misfortune. You can’t be friends with your characters.

10 - How easy has it been for you to move between genres (songwriting to fiction)? What do you see as the appeal?

It’s also easier to write song lyrics in the shower.

I set up in a recliner in my living room with the laptop in my lap, and the folk-music radio station on low. I try to write for five hours a day, averaging about 200 words per hour. Editing can be done in pieces here and there, but I like to do the writing in dedicated chunks.

There’s no magic bullet for a stall. You just keep plugging. I haven’t been plagued by full-blown writer’s block (knock on wood). Ten percent of my words just flow out, and the other ninety percent drip. When I’m stuck, I’ll just drip out some words, and play around with them. Some really good sentences are more the work of bricklaying as opposed to, uh, architecture.

Dead fish. Once a year, each fall, along the Rideau River, they lower the water levels, leaving many unfortunate carp high and dry.

“Books come from books.” That’s a pretty good line. Songs come from songs - I know that. If people count as “forms,” then I would say that they have the most influence on my writing. Other people give me ideas for characters and story lines.

I like those artists that deal with death and hard truths with a sense of humour. John Irving. Roger Waters. Kurt Vonnegut. We’re doomed, but life is still a blast.

I’m also a big fan of those writers that are just playful with words. Ogden Nash, Bob Dylan, Dr. Seuss.

I’d enjoy being a filmmaker. A director. A director with a big budget assembling something grand.

Writing is just a piece of my life. It doesn’t consume me. I like to play music. I’m in a band. I’m a teacher, a naturalist, a curler, a golfer. A husband, a father. Lots of people fairly close to me didn’t even know I wrote a novel. I spend more time on “something else” than writing.

Braiding Sweetgrass by Robin Wall Kimmerer is a great read. It’s about looking at our relationship with the earth through an Indigenous lens. Usually the people who know the most about non-fiction topics are not the ones who should be writing about them, but Kimmerer is just a great writer.

Mad Max: Fury Road was amazing. That movie didn’t get the accolades it deserves. If that’s not a Best Picture, what is? A director with vision pulling it off on lots of different levels.

Another heartbreaking novel of staggering genius. Plus a CD of songs about beekeeping. Really. It’s going to be called “A Bee CD.”