Kevin Andrew Heslop, the correct fury of your why is a mountain

capitalism shot that Vermont state messenger appealing on the spot

The author of three chapbooks prior to this new release, London, Ontario poet Kevin Andrew Heslop’s full-length poetry debut is the correct fury of your why is a mountain (Guelph ON: Gordon Hill Press, 2021), a curious exploration of lyric thought through pointed language. I’m fascinated by the ways in which Heslop’s rhythm and cadence meets physical space. His poems are less composed by continuous flow or narrative stretch than a sequence of points met that connect to form a larger narrative shape. “a thought, barefoot //// slips,” he writes, to open the poem “forward,” set prior to the first section of the collection. To follow this, as part of “i cavalloni,” the opening poem of the first section, “one whole third of your life is spent getting used to gravity,” he offers:

His is a poetry of observation, and the precision here is incredible. Heslop composes poems as articulate bursts: he makes his point and quickly out, refusing to linger or tarry across any stretch of lyric. His poems contain multitudes, and are less about and around subjects than utilizing references as source material to provide narrative context; the ways through which he speaks on human interaction and a very living language. As the first of the two part poem, “about the twice-bent blast of that good night,” reads:

Into the habitable painting of the world, a text
like What’s happening bro? arrives. “Fuck,”

The world and everything in it. That night,
abacus was from the Hebrew word for dust;

calculus, a pebble, from the Latin.
“I know that it’s a stupid question, but

how are you doing?” 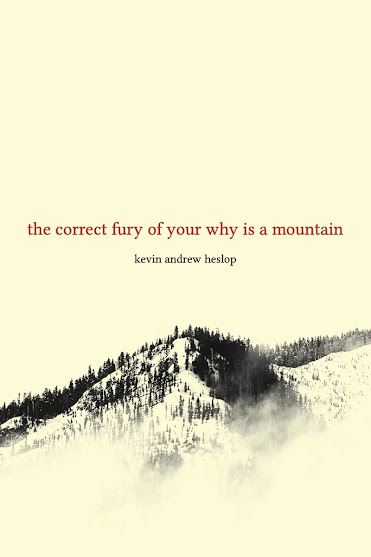 Offering multiple contemporary references across the collection—Siri, the destruction of part of Notre Dame Cathedral, Twitter—he almost includes these as a means to a particular end; an intimate lyric built in, around and of its particular temporal space, a lyric not possible through any other time. “I’d woken from the dream in which a man,” he writes, as part of the poem “popliteal fossa,” “who in the dream I both was and could see, // mutters Esperanto to himself and walks. Limestone / and moonlight. Mulled wine in a teal ceramic cup // in his hands.” There is almost an echo here of the work of American poet Rosmarie Waldrop [see my review of her latest here], through the way Helsop utilizes structure and syntax as a way to propel his poems. What drives his lyric appears to tbe how and through language and meaning are constructed; a language not specifically assembled around the idea of structure, but a structure of ideas, allowing meaning to simultaneously be both building blocks and destination. There are some remarkable and envious things happening in this collection, and a lyric I haven’t seen done this way by anyone else.
Posted by rob mclennan at 8:31 AM
Labels: Gordon Hill Press, Kevin Andrew Heslop