You must change their life!

Because if we don’t resist
or “riot”, we’ll wind up with
no civil rights whatsoever.

Revolution as absolute
hankering. (“Necessities for the Whole Hog”)

From Winnipeg-based poet Colin Smith comes Permanent Carnival Time (Winnipeg MB: ARP Books, 2021), furthering his exploration of civil discourse, neoliberal capitalism and chronic pain amid Kootenay School of Writing-infused poetics. Permanent Carnival Time engages with the prairies, including the historic Winnipeg General Strike, writing a wry engagement of language gymnastic and ruckus humour. “Labour is entitled to all it creates.” he writes, as part of the second poem, “Necessities for the Whole Hog.” Sparking asides, leaps and fact-checks, Smith’s lengthy poetic calls out culture and capitalism on their nonsense, deflection and outright lies, composing a lyric out of compost and into a caustic balm against capitalism’s ongoing damage. “Money with more civil rights than you.” he writes, as part of “Folly Suite”: “Luckless bustard.”

Smith is the author of 8x8x7 (San Francisco CA: Krupskaya, 2008), as well as the out-of-print Multiple Poses (Vancouver BC: Tsunami Editions, 1997) and Carbonated Bippies! (Vancouver BC: Nomados, 2012), both of which were included as part of the collection Multiple Bippies (Vancouver BC: CUE, 2014) [see my review of such here]. As part of his 2016 Touch the Donkey interview, he spoke of the ongoing mutability of his writing, and his interest in refusing to remain static:

Six cans of Kokanee, half a dozen Mooseheads. Part contrivance, part intuition. While I mostly work in free verse, I don’t ever want to be exclusive about it.

Considerations of aesthetic fit are the endless trump here, and should be. Finding the best strategy and vocabulary for each poem. The world is lumbered with more than enough limitations without me adding to them! I always thought that one of poetry’s better angels (or angles) was that it could help make our considerations of the world larger (I still believe this). So, no language need be excluded, no tactic need be forbidden.

Although, having just issued a version of “everything is permitted” with that last sentence, I’ll now qualify it by saying that it’s morally noxious to maim the afflicted — one should just flat-out not do it.

The linguistic cargo of a sonnet can be very different from a LangPo word-salad approach. If you want to, and you have the technical moxie to get away with it, why not do both? Why not head for other possibilities as well? 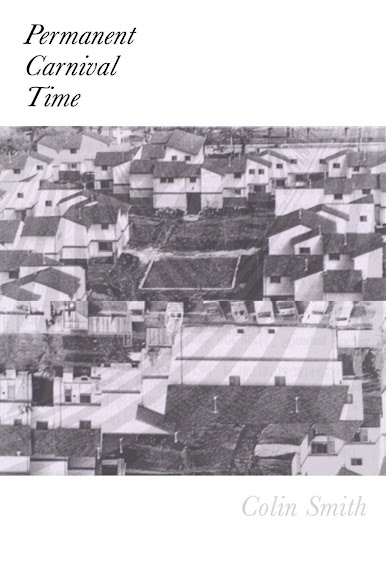 Permanent Carnival Time is structured into nine extended poem-sections, including “Folly Suite,” a suite of nine shorter poems. For each poem-section, Smith’s scale is expansive, referencing a slate of high stakes, calling out fascism, punitive legislation, capitalism, pollution and even references to the Highland Clearances, from “Human whites ratch. // Jacobites / stomped (Clearances / to follow).” of “Fiddlesticks,” the second poem of the “Folly Suite,” to the fifth poem, “Twaddle,” that offers: “If the Highland Clearances hadn’t happened / these poems would have been written in Gaelic.” Through a gymnastic collage, Smith offers both wry commentary and straightforward notation, connecting capitalism’s insistence on itself beyond all else, including human sustainability. As he writes as part of “Transmutable,” “Something you can’t talk your way out of. / A booing economy.”

There aren’t that many poetry collections that write on the Winnipeg General Strike of 1919, so it is interesting that Smith also offers Vancouver poet Rob Manery’s It’s Not As If It Hasn’t Been Said Before (Vancouver BC: Tsunami Editions, 2001) in his notes at the end as a recommended title for further reading. On his part, Smith writes: “30,000 Winnipeg workers withdraw / their permission, walk away / from the marketplace. The Hello Girls / say their goodbyes numerous / and numinous. /// A scant 40 minutes / to pass a clampdown / amendment through Parliament. /// Austerity / follies.” (“Necessities for the Whole Hog”). In certain ways, Smith’s work has a structural echo of a poet such as American poet Sawako Nakayasu [see my review of her latest here], except with a very different set of ways through which he arrives. As part of a writing prompt Nakayasu wrote for Woodland Pattern not long ago, she offered:

1. Choose an object or concept. Let’s call this thing “X.”

2. Tell yourself, in some fashion, that every poem you write from now on is going to be “about X” or “an X poem” or features an “X.”

3. Write poems in this manner for as long as you can.

There are ways in which one could see Smith’s expansive and accumulated poems following a similar trajectory, but through a single, extended piece over Nakayasu’s book-length project. As well, where Smith contrasts from others of the loose assemblage of Kootenay School of Writers poets of the past twenty-plus years is through that ability to write around an idea or a subject, pulling it apart from every perspective, and tossing in a collage of sly commentary, jokey phrases and gymnastic, as he calls it, “word-salad.” Unlike such poets as Jeff Derksen, Louis Cabri or Dorothy Trujillo Lusk, Smith appears to originate with meaning, utilizing language as the means through which he plays, displays and explores that meaning, over a kind of composition that begins with language or sound. As well, Smith might utilize theory, but as a part of a larger structure that remains focused the ways through which people are affected by such policies, pollutions and punditries. His foundation of anti-capitalist ethos remains, and remains strong, but the poem “Necessities for the Whole Hog” begins with the history of the Winnipeg General Strike; the poem “Essaying Pain” speaks to his ongoing experience with chronic pain, etcetera. One could say that his Kootenay School of Writing poetics is also one intertwined with a deep empathy (and a curt tongue), writing out his anxieties for the possibility of human sustainability, down to a deeply personal level. As he writes as part of “Essaying Pain”:

What seems to be missing from “the literature”
is description of chronic pain or permanent affliction
that shows in any meaningful way
what, what, what, what, what
a deep-dish and ineluctable tedium it is.

Roaring at the sky, do you
expect a reply?

All the good temper of a rhino.