FRIDAY / I try to feel what I think / This feeling will feel / Like but I
can’t / How will it feel / It could be enchantment / To quit / The feeling
of repetition for creativity / Of having done this before / Or the impru-
dence of grasping at nothing / A less invisible nerve / There will have
been countless last days in me by then / Fantasies about not going back /
The deer carcass finally disappeared / Where 124 meets 78 this morning
/ Every morning since the winter / Why no one has cleaned it yet / Or if
there’s cleaning for the dead bodies at all / Is part of an inherent, scientific
logic / A contradiction / I feel within myself / I know I will feel tomorrow
/ Slightly foolish for trying to anticipate my own feelings (“La slowteria”) 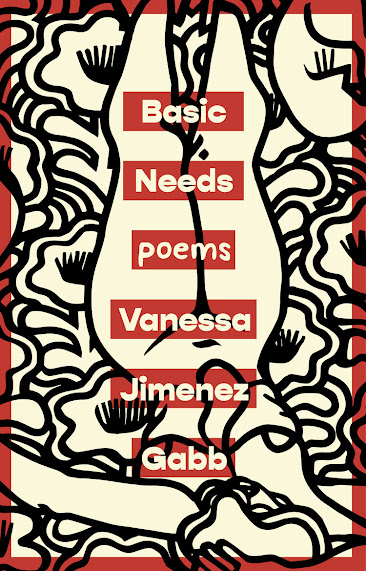 Set in three extended sections of lyric fragments—“La slowteria,” “Roses” and “You and me, forever”—is Brooklyn poet Vanessa Jimenez Gabb’s second full-length collection, Basic Needs: poems (Chicago Il/Cleveland OH/Iowa City IO: Rescue Press, 2021), a follow-up to her Images for Radical Politics (Rescue Press, 2016). As Daniel Borzutzky offers as part of his blurb on the back cover: “Here is a poetics of labor, history, brokenness, money, solidarity, ecology. Here is a book that thinks and loves deeply in order to survive the infinite collapse of the system.” In Basic Needs: poems, Gabb writes a lyric around labour and the working-class, and of attempting to think, live and love between and amid the requirements of daily living. “Men,” she writes, to open the collection, “I have known are changing their lives. / Coming to life as a frontier. To see the / beginnings.” Composed as a collage of short bursts of lyric and prose, including blocks of italicized prose, long stretches of accumulated phrases and more traditional lyric stretches, Basic Needs writes out the complications between the two poles of “basic need,” from financial stresses and requirements upon the working class, including the working poor (a conversation that has become forefront during Covidian times), to the equal requirements of emotional health and stability. “To say at all,” she writes, as part of the opening section, “But where was that the point / The small deep point is long gone now / They have asked us to change [.]” Further on, in the same poem, offering:

Through the first section, she intersperses short sketches of the history of labour movements in the United States, offering counterpoint between what was fought for and what has yet to be achieved. As she writes: “The parade turned to the lakefront, gathering there for speeches about worker’s rights, delivered in many languages. Albert Parsons spoke of the invincible might of united labor. August Spies, thirty-one, an upholsterer and editor of the German workers’ paper, Abreiter-Zeitung, was a favorite of the crowd. When the applause for Spies died away, the May Day protest was over.” In her “12 or 20 questions” interview, posted at the end of 2015, she said she was working on “A long love poem,” and Basic Needs, one can safely presume, is the result. As the second poem/section opens:

Free love? As if love is anything but free! Man has bought brains, but all the millions in the world have failed to buy love. Man has subdued bodies, but all the power on earth has been unable to subdue love. Man has conquered whole nations, but all his armies could not conquer love. Man has chained and fettered the spirit, but he has been utterly helpless before love. High on a throne, with all the splendor and pomp his gold can command, man is yet poor and desolate, if love passes him by. And if it stays, the poorest hovel is radiant with warmth, with life and color. Thus love has the magic power to make a beggar a king. Yes, love is free; it can dwell in no other atmosphere. In freedom it gives itself unreservedly, abundantly, completely. All the laws on the statues, all the courts in the universe, cannot tear it from the soil, once love has taken root.

Love needs no protection; it is its own protection.