Travis Sharp, YES, I AM A CORPSE FLOWER

I is a sexed interior wondering through a field of objects.

There is a recurrence of a lone.

In these dreams an unnamed forest of bright lights.

What I wouldn’t give to be made up of photons.

A refractory factory of body of light.

I is bright lights coated over.

I was the failing of a sentence.

I is the text corpse of the sentence.

My thanato to its sententia.

Saliva tongued over the language of the sentence of the I of the body. 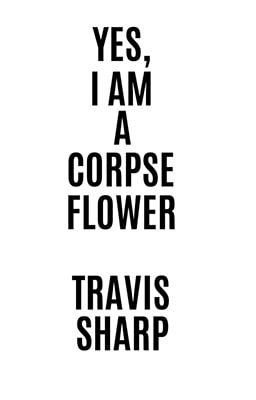 It is interesting to see Kirby’s Toronto-based knife|fork|book moving into full-length poetry titles with Buffalo poet and editor Travis Sharp’s full-length debut, YES, I AM A CORPSE FLOWER (Toronto ON: knife|fork|book, 2021), a lyric exploration of gender, queerness, the body and the shape of identity through language. “The sentence contains multitudes of body & body-in-the-bag,” he writes, as part of “Sinister queer agenda,” “& I / within in. Across it, the axes of it, spread eagle.” YES, I AM A CORPSE FLOWER is composed across six sections—“Yes, I am a corpse flower,” “Sinister queer agenda,” “The body under valuation: a musical,” “I guess we should talk about our feelings,” “Protean shakes: a biography” and “OrganGrindrTM”—the second of which appeared previously as a chapbook through above/ground press. Sharp writes of multitudes, of queerness and the performance of the body, including the notion of being bodyless. He writes: “The desire has been there from the beginning. // I replace right kidney with a porcelain lentil bean. // At what point does the body unreadable converge. // Its overwhelming mass. // Its gravitational pull infinite. // I is the tongue tonguing saliva around a period.” Some of the sections, such as the aforementioned second section, exist as extended lyrics, with others set as suites of shorter pieces, all of which move through a variety of structures, from the halted accumulation of lyric phrases and short bursts of the first two sections, to the suites of the fourth and final sections.

There is a flourish and even a buoyancy to the way Sharp utilizes language, writing a narrative lyric that throws and throws off expectation, cleaving and achieving unusual turns in mid-flow, reminiscent of some of what I’ve seen from Julia Polyck-O’Neill or Margaret Christakos. In his poetry mini interviews interview from 2019, I was fascinated by his response to the question “Why is poetry important?” where he answers: “Poetry, which is not escapism, can distance and make strange the real so that you can actually for the first time see it.” As possibly relating to that same idea, there is a simultaneous straightforwardness and a gymnastics his lyrics achieve, rather joyously, making the familiar both strange and increasingly clear. Just listen to the music and jangle of the opening of the second poem, “ACT TWO: ‘I’M TOO BUSY TWINKING, I CAN’T WORK FOR MONEY’,” of the third section, “The body under valuation: a musical,” (a section that opens with, naturally, “performance notes”) as he writes:

Cautiously buoyant
in a left-leaning twink tank
and it’s so great so grand so
gracious so fee’d
America the fee
or so the think tank newsletter tells us:
“they hate us for our feedoms!”

YES, I AM A CORPSE FLOWER is an impressive debut, and Sharp’s language is thick, racy, sensual, ruckous and uniquely physical, upturning tables with a flamboyance that sits underneath the skin of his lyric. Through the final section, Sharp composes a grinding echo of bpNichol’s Organ Music (Windsor ON: Black Moss Press, 2012), but as a suite of poems that speak of queerness, and body parts in terms of illness, ruptures, infection and erasures.