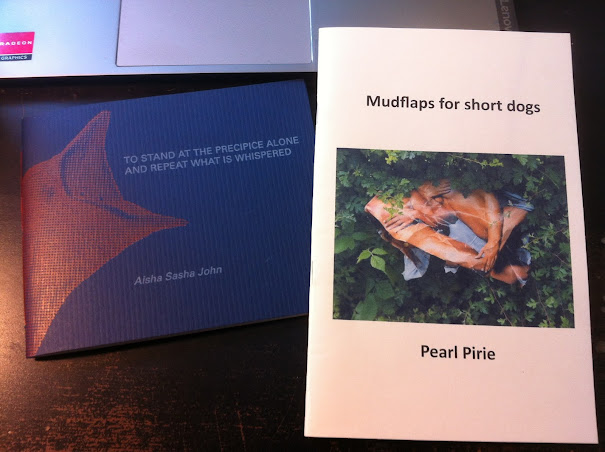 It seems I haven’t done one of these in a while. Where are all of the chapbooks?

And already thinking the next edition of the ottawa small press book fair might be January. Will that be safe?

Toronto ON/Brooklyn NY: From Brooklyn’s Ugly Duckling Presse comes the latest from Aisha Sasha John, the chapbook TO STAND AT THE PRECIPICE ALONE AND REPEAT WHAT IS WHISPERED (2021). Composed as a kind of poetic diary, the collection opens: “In the fall of 2018, I left Toronto for Vancouver—the city where I spent the bulk of / my childhood and in whose suburbs my parents still live. // I stayed 4 months.” Akin to Bernadette Mayer’s poetic diary, John rushes through a first-person exploration of poetic prose in short, accumulative sections, from the standalone “I am sad, alone, bored and have no friends.” to longer stretches of explosive, extended bursts. She writes of seeing her father again after fourteen years, of wandering the SkyTrain, of simply being in Vancouver and meeting with friends, shopping and other daily tasks. While there do seem deep echoes of Mayer’s prose [see my recent review of such here], through both the sense of immediacy and prose/poem structures, John’s lyric is more deeply urgent, seeking and striving and demanding better, further and something other. The prose, too, is interspersed with sections of phrases set in bold, held as a staccato series of counterpoints to the prose-structure, composing a kind of Greek chorus to the collection in billboard fashion: “TO BE UNPITTIABLE // ADEQUATE LAUGHTER // WELCOME AFFECTION // SPONTANEITY // SURPRISE // TO BE SOUL // UNINJURED [...].” This is writing that seeks a strong ground upon which to stand, and does not easily find it.

To have the desire to get milk and to go and get actually milk, from the store, in New Balances, running down and then back up six flights, with milk, and to finish the Elenbaas talk about dharma and the ascendant, and to focus on this question of fountains, so as to begin something, and also continue, so as to have adequate days to amend, ameliorate, improve, polish, better that which I’ve begun, writing, that is, a piece – about fountains, so as to complete an assignment, a text, for an exhibition, so as to get money, so as to give it back, that’s right TD Visa, so as to negate what was made positive: a meal, a purchase, a cost, an item, made mine, by my word and will, with the absented head/away daze of being here, busy and idle, purposed and lost, tasked and unmoored, and, now, owled, as an owl, or with them or one or as yes as one, hunting in the night and resting too. I had a dream about a group of people and one of them, this man, something happened to him. I remembered it so well this morning I imagined never being able to forget. So I have not yet but will, immediately, stop at the round the corner grocery store, overpriced, expensive, windowed, there, and purchase with a wave of my bank card’s chip – milk.

Victoria BC/Alcove QC: Pearl Pirie’s latest [see my recent review of her latest trade collection here] is the chapbook Mudflaps for short dogs (2021) from John Goodman’s Trainwreck Press, a small assemblage of short poems that play with the concrete elements of form and surrealism, writing of cows, breasts, railway bridges, airport hangers. She writes in pentameter, word chains and sonnets, seeking what possibilities that form might offer that might not otherwise be. Pirie’s poems always have the flavour of thoughts in mid-process, catching themselves unawares or between certainties, seeking to ask whatever questions might occur. “i did say poppy not puppy, didn’t I?” she asks, at the end of “the body’s patient silence is damning, provocative even,” “if you say what is true, once is enough. / if someone listens.” There are some curious explorations through body image and self, asking questions I’ve not heard uttered before, whether in poems or anywhere else. She always seems to have the ability to take a question into entirely new realms, offering the space of the poem as a structured free-form arena of seemingly-random associations that sequence themselves into a series of entirely unique narratives.

photoshop moves in mysterious ways.
wonderbra moulds breasts into shapes
uniform as kfc meat. calling the natural
unnatural. is this okay for breasts
to be pinned as a low chignon,
as if they were kielbasa plugs
inserted into a push barbie toll.
why strap sausages from strings, cut
neck and back into cutlets of cramps.
prehensile breasts should be a thing.
make the suckers work for a living.