SONG FOR THE SONG OF THE ROSE-BREASTED GROSBEAK

If you hear a robin who’s had voice lessons,
Roger Tory Peterson suggests, it’s probably him.
OK, but not a robin who’s gotten uppity, not
the pop star doing it to the anthem,
adding spangles and boosting the bombs
already bursting in air. Imagine
Ella Fitzgerald in the shower singing
“You are my sunshine,” loving the notes,
but letting them swell into surprises
all their own, music with mischief in its back
pocket. While he’s filling the morning with rose-
breasted ease, the missus,
perched nearby in her polybrowns,
isn’t overly impressed. For her
it’s the usual. Up in their nest
she’ll lay three whole notes:
silent        potent         perfect. 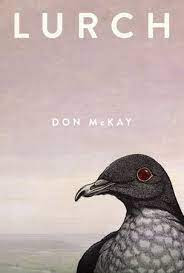 Over the years, and across more than a dozen poetry collections—including a volume of collected poems and a selected poems—since Air Occupies Space (Sesame Press, 1973), Canadian poet Don McKay’s poems seem to have become quieter. They were never exactly “loud,” I suppose, but there’s a level of quietude, almost zen-like, that his work has achieved over the past few years. To paraphrase McKay himself, he’s been composing poems enough that any bird would trust to light upon. His latest collection is Lurch (Toronto ON: McClelland and Stewart, 2021), a collection of lyrics that write of what we are in severe danger of losing entirely: of rhizomes, fungi and birds, examining a landscape that begins just there, at the edge of the bush, at the edge of the water. “Let’s pause and listen for what’s happening / underground,” he writes, to open the poem “RHIZOSPHERE,” “with the roots, the rhizomes, and / their close associates, the fungi and the worms.” There is an attention he puts enormous energy into, seeking clarifications on geologic time and the mechanics of birds. His interest in birding is well-established, going back to Birding, or Desire (McClelland and Stewart, 1983), with the evolution of attending the earth’s geologic shifts and consciousness within a decade or two, such as Another Gravity (McClelland and Stewart, 2000) and Strike/Slip (McClelland and Stewart, 2006). I mention all of this because of how the poems in Lurch extend everything he’s done prior, furthering conversations and concerns around nature’s frailty, both human and environmental, concerns around ecological disaster and the length and breath of the earth’s own history, even well before the emergence of human civilization. As he offers to close the poem “PROBLEMS IN TRANSLATION #23: BACK DRAG,” writing: “the back drag at my feet will not translate / as either fate or misery but / chuckles to itself—mountain / to boulder to cobble to / sand, affable and unhuman, the ancient / geologic joke I almost always / not quite but very nearly get.” He writes for the extinct, including the Passenger Pigeon and the Eskimo Curlew. He writes out the losses and those still to come, as he explores his certainties and uncertainties, and the long, slow process towards a particular kind of enlightenment that might never emerge. As he writes to close the poem “WIND’S INSTRUMENTS”: “Until here’s a little skirmish / come to ruffle your hair and lift / the fireweed fluff, to loft a pair of ravens / into aerial duet and hang plastic bags / in trees like shredded / non-biodegradable ghosts.”

Posted by rob mclennan at 8:31 AM
Labels: Don McKay, McClelland and Stewart