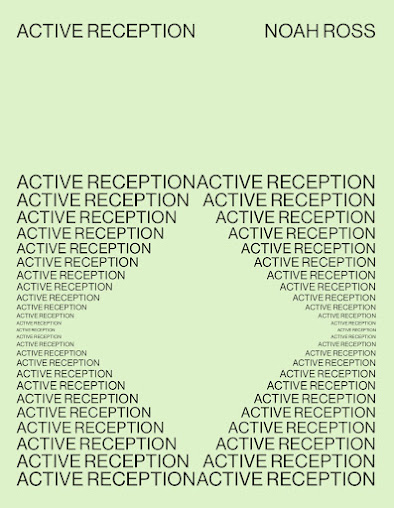 Berkeley, California-based poet, editor and bookseller Noah Ross’ second full-length title, after Swell (Otis Books/Seismicity Editions, 2019), is Active Reception (New York NY: Nightboat Books, 2021), self-described as a “vibrant work of lyric, conceptual, and confessional poetic modes pitched to enact a queer politics of liberation.” Structured in a triptych of sections—“cheek,” “(w)hole” and “ch/eek”—Active Reception is constructed out of text mangled, marked, turned upside-down, structured in blocks, rearranged in rows and across the length and breadth of the page. “I TAKE IT IN as I give it,” Ross writes, as part of “(w)hole,” “as in, a kind, of versatility, as if, so below, as above, the bower, or my torso, as an archive, as a subject, looking/feeling backward, I assemble, a mixture, of liquids, or dusts, altogether, vibrant, as matter, of fact or refuse, animated, an altar or affect, glued kitsch, a Lanigan-Schmidt, an architecture of diction, comes to love, once inside me, reverberations, abound, in me, about, from me…[.]”

Ross does reference (see above) writers Dodie Bellamy and the late Kevin Killian, and there are echoes one can easily see of the writings of the New Narrative [see the anthology Writers Who Love Too Much: New Narrative 1977-1997, eds. Bellamy and Killian (Nightboat Books, 2017), as well as my review] in this work, as both the New Narrative writers and Noah Ross’ Active Reception are deeply influenced by their prose explorations of pop, punk, theory, sexuality, queer theory and social struggle. While Ross’ explorations explore prose closer to a prose-poetry vein, the echoes, and the concerns, remain, as Ross writes as part of the accumulative “(w)hole”: “the ritual of production as a labor there is no right to a rectum has no straightness [.]”

Active Reception is a polyphonic chorus of chaos and lyric complexity, textual overlays, breaking apart and reassembling. It is a structural myriad of lyric, sexual swagger and the body composed to argue and articulate a freedom that is quite luxurious. There is a bounce and parry of sound and rhythm that Ross employs, a guttural, gestural openness, from sound to the mechanics of text on the page, running the gamut between the boundaries of meaning to sound to visual structures. This is a book of ambitious and wonderfully playful structures, fully realized as a book one can enter at any point, but not possibly, or easily, leave.

spring & chaos in the air in yr workplace, at the festival, in the offices of yr friends, neighbors, loved ones, former housemates, in yr institutions, relations, desires, I take it in, in strides, as I’m updated, by the hours, by the books of ours, growing grasses haven’t told me what they’re growing they don’t have to, the ceiling ripped open, unusual for buildings built of this era, somewhat stilted, or patchwork of nettings, or skins splayed as if newly applied, a kind of self-(re)generation of unintentional entrance, doorway or function, or flow of water, or seminal fluids, falling from a /

bove the bower or

a nightstand there i

pick the flowers over fumes / four-to-the-floor for Sunday noons / a pre-lunch drinks situation ground green grass golden in showers feeding off dandelion wild, even wilted, leaves full force, in yellows, made a wine, so hesitant, to reach out into an ether, a void, that is, avoidance, a boy, that is, a boy dance, losing a self heading straight into source of smell that is neither bad nor enviable as position, fallen two steps behind, this waltz off key, notes too distant to settle, the stillness in the evening light still, some day, stiller, roots won’t sit once plucked, tooth moving deep into a center, no gap in this dirt til we make it, the jasmine dried from the holy cit, in the book itself a relic, these trees don’t grow here anymore, haven’t for a while, let it sit on the counter, on the right page, at the right time, itself begins to flower, a resonance of muscle, a memory of encounter, setting pace in tasteful measure, deepest as surrenders, the slow spit the spit still lowers, alone with you is how we’ll grow it, tending to the end bits with a nibble, around the thing, a meditation on circumference, what light is that those flailing pinks draped against the woods of the crossing or the red stick poking out from the fronts, what harboring soundscape blistered in what mists aplenty