Writers Who Love Too Much: New Narrative 1977-1997, eds. Dodie Bellamy and Kevin Killian

Why New Narrative and why now? Writers Who Love Too Much arrives in the wake of renewed critical and scholarly attention to the movement; enough, at any rate, to convince us to revisit, reprint and revive some of the original documents of the 70s/80s/90s avant-garde. Founded in the San Francisco poetry scene of the late 1970s, New Narrative responded to post-structuralist quarrels with traditional storytelling practice for reinscribing “master narrative,” and attempted to open up the field to a wider range of subjects and subject positions. It would be a writing prompted not by fiat nor consensus, nor by the totalizing suggestions of the MFA “program era,” but by community; it would be unafraid of experiment, unafraid of kitsch, unafraid of sex and gossip and political debate. Novice writers have been lectured since forever to “show, don’t tell,” but one thing New Narrative did was tell and tell and tell without the cheap obscurantism of “showing.” In the years since 1977 the roots of New Narrative have become obscured, partly because it was an ill-defined movement from the beginning, partly because its point(s) of origin are in debate, and partly because a welcome host of second and third generation writers later altered its character in significant ways. Our anthology will go back to a putative beginning and proceed warily through the decades since Gerald Ford was president, and it will stop twenty years later, right at the beginning of what might be called New Narrative’s second wave. An important anthology from 2004, Biting the Error: Writers Explore Narrative (edited by Robert Glück, Mary Burger, Camille Roy, and Gail Scott), shows that new wave in full flight, with a galaxy of brilliant young writers disparate as Rob Halpern, Renee Gladman, Douglas Martin, Heriberto Yepez; but Writers Who Love Too Much presents work made during the first wave of New Narrative and stops itself only by immense self-control, at a place that fairy demands a sequel. (“New Narrative Beginnings 1977-1997,” Kevin Killian and Dodie Bellamy) 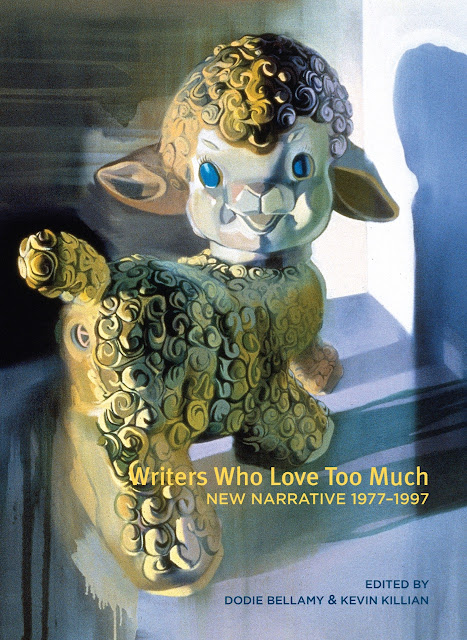 Bo is called both Bo and Butch. Bo likes to be called Butch but he writes his name Bo. I think it’s a spelling problem. I call Bo “Bo” just because he likes Butch better than Bo. Also I can’t say “Butch” too well, I always end up saying “bush.”

Me though, I’m named Squeaky, after Squeaky Fromme. Squeaky Fromme was an anarchist and killed a movie star. I’m supposed to turn out to be a butcher of stars (butcher than Butch). I’m called Squeaky, Pip-squeak and weasling, which is weasel + weakling.

Beyond all of that (as if that weren’t enough material to spend the rest of the year sifting through), the anthology also includes pages upon pages of notes at the end, expanding upon editorial choices as well as providing a great deal of context for certain of the pieces. As they write in the notes for “Judy Grahn, Interviewed by Steve Abbott and Dodie Bellamie”: “We wanted our anthology to show more than a series of texts now canonically arranged; for we wanted to present a vivid picture of a particular avant-garde, and we knew that to do so we must include the ephemera. Maybe you’d want that in every anthology, to show the social construction of the writing, but ephemera itself seemed especially apropos to New Narrative writing, which began as a body of work torn, like the Living Newspaper of the WPA project of the 1930s, from the headlines, reacting to social and political actions as they occurred, or as we worked for them to occur.”

GOOCH: Yeah, genre writing. In the classical period poets would do an elegy and then do an ode, then a lyrical poem and everyone knew what they were doing. Now poetry’s gone into this kind of mess in a way—which is good, I don’t mind that—but in writing life there are these very definite kinds of writing: magazine articles, stories, novels.

SA: The 80’s as the pastiche of all these things being thrown together.

GOOCH: That connects with what’s going on in painting. In fact there are these connections between certain kinds of painters and writers I’m starting to see, which I hadn’t thought about much before, and one of them is that, being free to throw in everything, and the other is being free to tell a story again, without having always to be reminding everyone that one knows one’s writing a novel, drawing attention to “this is language”—all that kind of stuff which was popular, which was need, which now we really know. Novels are old-fashioned; and we can just go on and do it anyway.
I guess I’m interested in the popular thing, not popular like being the most popular person in the class (although that’s all right). I wrote an article for GQ about Dennis and the L.A. poets, about Ed Smith and Jack Skelley, about California and the excerpts from their poems were completely accessible. They were about high school life, that kind of stuff, and anyone in the world could get that stuff. I kind of like that. A lot of writing being done actually is accessible. (“BRAD GOOCH: interviewed by Steve Abbott”)