Phalanx of the literally ascending
but proverbially stuck. Vladivostok elevator

to the less successful floors of Business in America.
Among us one who tracks info at, office at, questions at

like a teen collects and doles out bowling shoes. Support
at. Dear madam, dear operator, if it concerns you,

a mix of thanks and unease follows me
like a hunter who doesn’t know his rifle’s empty.

truly abusive or angling for a refund.
That is, all of us, virtually. On what wavelength

do you wait for petitions? Oh reactor,
ghosts appear to believers,

not to us who could
use a break. In your sign-off

pop the collar of the nameless: the team,
customer service, x or y branch, on behalf of, or

thank you plus two carriage returns
like a thin signet of white smoke. 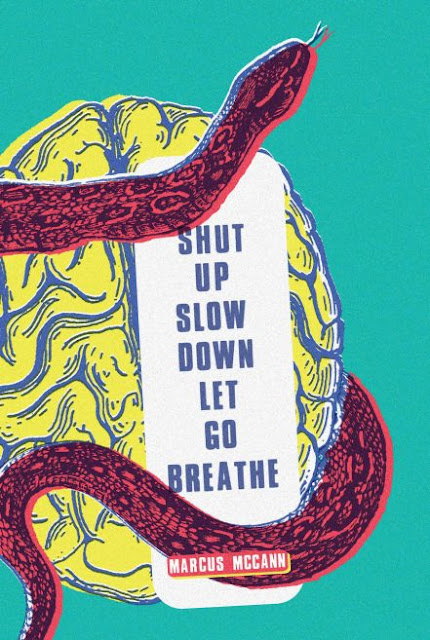 Toronto poet Marcus McCann’s third trade poetry collection, Shut Up Slow Down Let Go Breathe (Picton ON: Invisible Publishing, 2017), continues his trajectory of composing an incredibly dense and gymnastic lyric, one that is remarkably linear and precise, even in its use of language as seeming-collage [and you saw my recent interview with him on the book over at Ploughshares, yes? or my piece on him two years ago at Jacket2?]. The poems that make up Shut Up Slow Down Let Go Breathe are, one might say, an incredible mouthful: smart and sassy, thoughtful and wise, thick with swagger, impulse and a great deal more experience than his prior two collections. There are also a number of intriguing call-backs in this collection, from his “Sex at Thirty-One” [for context, see my essay on the “Sex at 31” series here], a selection of “chubby sonnets” composed in homage to Montreal poet David McGimpsey (“Labradoodle: An Essay on David McGimpsey,” which appeared previously as a chapbook through above/ground press), and three poems—“Never Straighten Is My Advice,” “In All Your Days May Three Days Be Your Works,” and “There Are No Tense Problems at the Great Imaginary”—that he calls “psycho-projective New Year’s letters,” writing in the notes at the end of the collection that he utilized a similar form in his first collection: “The game is to imagine what friends might be doing on New Year’s Eve. These three ‘letters’ were written for K. Louise Vincent, Steven Ruszkzycky, and Brandon Perlberg, respectively.” The extension of the epistolary form is curious, and the first of these poems, subtitled “Psychoprojective New Year’s Letter to Galiano Island,” includes: “Ideally your feet aren’t anvils / but updraft, your brain and heart aren’t storms / but transformer and transformer joined by sizzling / wire. Shift work, bawdy work, a firework / is emotional labour. Exegesis.”