To enter the realm of writing one must take one’s self to divorce court. I’m sorry it has to be this way. The re-education of my working eye winks. To enter the realm of writing is to suffer losses. Run off other sufferers, run off. I wanted to but could not say run off. I need someone to pet me until I fall into a lava tank engine love. The construction worker concept is just an unused drill by the side of the road. The well-lit crane sways in my direction. The trial of the snail is set to begin. Take your time. The trial of the elephant is told to us by the parakeet mind. (“Maya Deren Lives Forever / in the Speedboat at Night”)

Ever since discovering her work via Ugly Duckling Presse’s 6x6 [see my review of such here], I’ve been eager for more work by Brooklyn poet, editor and archivist Anna Gurton-Wachter. I’ve now been rewarded for my patience, thanks to Essay Press producing her chapbook (both as a free pdf online and limited-edition print edition) The Abundance Chamber Works Alone (2017) as #92 in their “Groundloop Series,” a series that seeks “to bring together authors exploring diverse subjects through loud, innovative architectures.” Set in three sequence-sections of prose poems—“Maya Deren Lives Forever / in the Speedboat at Night,” “A Development Proposal / for the Center of the Earth” and “Instances of the Corpse / Flower Pose, a Study Group”—she opens the small collection with an introduction/prose poem titled “PREFACE,” that reads:

There are competing visions of the swamp. Females deposit their eggs in a parasitic territory for gratification alone. The intruder salivates. An act is magnified by formal study. End scene. Later, back at the lab, the summer spirit remains unknown. Parasites surround the forest. What we call a self-created memory worthy of the father and worthy of the mother and worthy of the mountain of golden guts. What we call, “lurking in the water,” or “stable speech acts.” The world is sufficiently killable as the squatters can attest. The abandoned critters are so modest and struggle to become a symbol for the cosmos, seeping through the soil deep inside the earth.

I want to know how to feel when I wash ashore. What to communicate first. You might find yourself the viewer, the violent concept, alive to the spill of sight as it tries to expire. The viewer is meant to experience a faint memory comprised of all possible readings. To feel like the act of reading has accomplished a tunnel display of denied tenderness. You might find yourself inside this lonely boycott state, active inside a motionless pit. 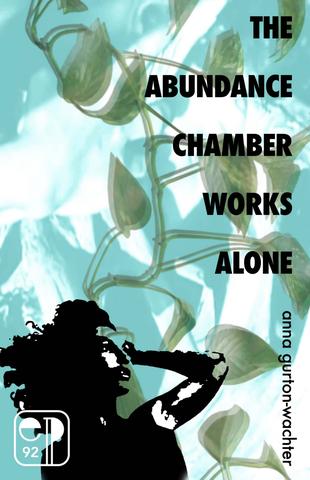 I’m absolutely blown away by the music of her lines, and a rush that sweeps the reader off their feet and into further, unexpected spaces. There is something fascinating in how Gurton-Wachter’s poems exist as abstract essays, constructed as expansive lyric catch-alls, structured to be able to include anything and everything, even while providing a linearity and purpose through each individual sequence. Her work is absolutely stunning, and she is easily one of my favourite American poets without a full-length poetry collection; I can’t imagine such a thing is far off.