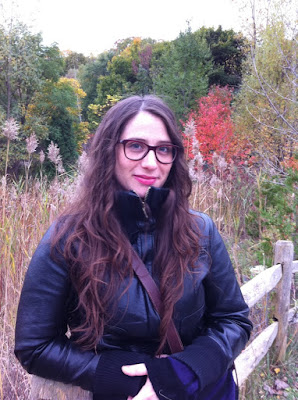 Samantha Bernstein is a Toronto writer and a PhD candidate at York University. Her first book, Here We Are Among The Living, was nominated for a B.C. National Award for Nonfiction. Her second book, Spit on the Devil, came out this year. Her poetry has appeared in Exile and The Fiddlehead, among others, and on the Toronto Poetry Map.

1 - How did your first book change your life? How does your most recent work compare to your previous? How does it feel different?
Once I got that book out of my system, people and events stopped feeling like things I had to record in the same way.  I think there was a process of narrativizing my perceptions and experiences that was psychologically necessary for me in my early twenties, and it was a tremendous pleasure and privilege to get to make a book out of that necessity.  It also taught me a lot of valuable lessons about the process of publishing.  This book of poems has in common the fact that in some ways I've been working on it since my early twenties, and like the memoir these poems are ways of working through ideas and responses to the world and my position in it.  It's different in that as I was writing it I didn't have to pretend to be myself in my early twenties, which is liberating.  This is a much less frightening book to put out.

2 - How did you come to poetry first, as opposed to, say, fiction or non-fiction?
I didn't.  When I was little I wrote stories, and then as a teenager it was songs, which was maybe poetry in disguise; it was the nineties, Ani DiFranco was my hero, rhyming made sense to me and I liked singing and the callouses I got from guitar. The structure of songs maybe makes it possible to feel like you've written something that's not just words arranged vertically on a page, which was what I was (am?) always concerned my poems would be.  I was afraid of poetry, even though as a kid there were always some poems that had an incantatory effect on me ("Fern Hill"; "My Papa's Waltz").  I thought poetry was written by, like, old crazy men.  Thankfully the good graces of higher education taught me otherwise.

3 - How long does it take to start any particular writing project? Does your writing initially come quickly, or is it a slow process? Do first drafts appear looking close to their final shape, or does your work come out of copious notes?
Depends on the project.  My first book was almost 800 pages in its first iteration - try shopping that around!  It ended up around 350. I like editing.  It also took forever to start that, because I had no idea how.  Poems, some come out almost done, some I've tinkered with for years, some - maybe most - go through many drafts within a few days.  My dissertation has been useful in teaching me to pull together many disparate strands of thought and research.

4 - Where does a poem usually begin for you? Are you an author of short pieces that end up combining into a larger project, or are you working on a "book" from the very beginning?
This book became a book with a beginning and an end quite recently. I'd been writing poems here and there for years, and relationships had emerged between poems that suggested a structure, so it had been in two sections for some time.  But this winter a poem presented itself which I thought would conclude the whole thing - then I finished and realised it was the opening poem, and that there was a partner waiting to bookend it.  That whole process, and the editing process, clarified the concerns of the collection in new and I think productive ways.

5 - Are public readings part of or counter to your creative process? Are you the sort of writer who enjoys doing readings?
I do like readings.  I like hearing poetry read, and it's important to me that my poems sound good read aloud.  I read poems aloud to myself (my own and other people's) and it helps me understand them.  That said, I'm bad at getting out of the house. I was never very good at going to things and now I have a three year old and my husband works evenings, and I'm even worse at it.  The sense that there's a community out there of writers who read and attend each other's readings, and that I'm missing it, has always kind of haunted me, and now it's just a bit worse.

6 - Do you have any theoretical concerns behind your writing? What kinds of questions are you trying to answer with your work? What do you even think the current questions are?
Oh my, there are so many questions!  A big one for me, as an urban, middle-class whitish person is: is my book taking the place of someone's who has more important stuff to say?  Are the structural advantages to which I have access the reason I'm being published and not someone whose work might be more vital for this nation, this society right now?  I kind of think they are, or at least, I want to acknowledge those advantages and the role they play in my even feeling that I can write at all.  In having the opportunity to hone this craft.  There are so many people with stories and talent who don't feel entitled to write, or who don't have time.  And even my addressing this feels, in some way, patronising or preachy.  This is part of what my academic work addresses, too: how middle-class liberals or progressives can talk about their relation to structural inequality in a way that's not virtue-signalling and not callous and not useless.

7 – What do you see the current role of the writer being in larger culture? Does s/he even have one? What do you think the role of the writer should be?
There are so many different kinds of writers it's hard to answer that.  Writers of, for instance, BuzzFeed articles definitely have a role in culture!  But that's kind of glib, because I also think that many, many writers of many different genres have quite an astonishing influence on others.  Ideas from the past keep circulating, whether or not we know where they came from; ideas of the moment float into our consciousnesses and change how we talk about something.  I feel like I have no real knowledge of what matters to those beyond the little world I inhabit, but so often when I get to see that world for a moment I realise that there are all kinds of writings that matter deeply to people.  As for what I think it should be, my ought: I want writers to teach us something, to make us feel something, perhaps that helps us to be better to one another.

8 - Do you find the process of working with an outside editor difficult or essential (or both)?
Both!  More essential than difficult.

9 - What is the best piece of advice you've heard (not necessarily given to you directly)?
Love. Love anyway.

10 - How easy has it been for you to move between genres (poetry to prose)? What do you see as the appeal?
I feel fortunate to have a variety of genres to work with.  Different ideas or feelings seem to need different kinds of structures to be worked through or communicated, and it seems the sentiment/concept finds its form: like those games where you try and get the metal balls into the little holes, and the need determines the tilt.

11 - What kind of writing routine do you tend to keep, or do you even have one? How does a typical day (for you) begin?
A typical day begins with my daughter saying, It's morning!  Writing happens on the days she's at school (rush home, remember what I was trying to say, say it for four hours, leave to retrieve child) - but this is academic work unless in the grip of a particularly pressing poem, as happened this winter.  Non-academic creative work has, since her birth, mostly happened after she's asleep, listening for her inevitable waking, often on the porch smoking, though not anymore and farewell to all that.  It's a different routine than the previous book, which was for a time the thing I did all day every day, and this one would not yield a novel or long prose work - or, that's the dissertation.  I'm interested to see how the routine evolves over time.

12 - When your writing gets stalled, where do you turn or return for (for lack of a better word) inspiration?
My husband, often.  Talking to him gets my brains going.  Walking is good, the sky and trees good.  Dancing helps sometimes, or a deep stretch.  If it's a poem I often just leave it - it'll either present itself or it won't.

13 - What fragrance reminds you of home?
My mom's chicken soup.

14 - David W. McFadden once said that books come from books, but are there any other forms that influence your work, whether nature, music, science or visual art?
Conversation.  I think talking to people is maybe the biggest influence on my writing and thinking.  Also journalism.

15 - What other writers or writings are important for your work, or simply your life outside of your work?
I always feel like I'm horrible at answering this question, because so much of what will be important to me for a time is an article, a story or poem I read somewhere, and then I forget who wrote it, or fail ever to read anything more.  There's a line I think of all the time by a poet named Deborah Landau, but I've only read that one poem.  And in answering I inevitably leave out something absolutely central.  But a provisional, undeniable, entirely partial and disordered list?  Walt Whitman; Gwendolyn Brooks; William Dean Howells, Jane Austen, Henry James, Virginia Woolf, Charles Dickens, Ralph Waldo Emerson.  The writers on Transparent. Elizabeth Spelman.  Desmond Cole.  The New Yorker.  I especially love Adam Gopnik and Hilton Als and Emily Nussbaum and... oh, I'l stop there.  Where are the Canadians? Yes, it's a problem I might be able to address after the 19thC American dissertation is done...

16 - What would you like to do that you haven't yet done?
Write a novel.

17 - If you could pick any other occupation to attempt, what would it be? Or, alternately, what do you think you would have ended up doing had you not been a writer?
Oh, a lawyer, I sometimes really wish I practised law: where words do things in measurable ways. Also, though, I still have a hard time describing myself as a writer; usually I describe myself as an academic, which I also find quite surprising and isn't quite true.  I probably should have been a psychotherapist. It's my retirement career plan.

18 - What made you write, as opposed to doing something else?
Well, there are somethings else, but I can't seem to stop writing.  I often wish to, though less as I grow older.  It makes me happy.

20 - What are you currently working on?
Finishing my dissertation!