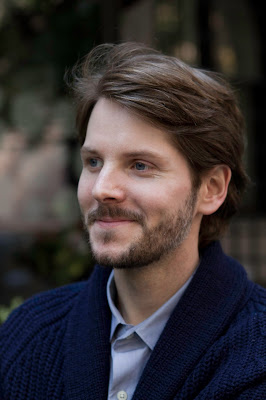 Andrew Seguin is a poet and photographer. He is the author of the poetry collection The Room In Which I Work (Omnidawn 2017), which was inspired by the life of photographic pioneer Nicéphore Niépce, and of two chapbooks, NN, and Black Anecdote. A former Fulbright Scholar in France, Andrew lives in New York City.

1 - How did your first book or chapbook change your life? How does your most recent work compare to your previous? How does it feel different?
Mostly not much, though it was a real affirmation of work and persistence, and risk-taking, because my first book was actually the third full manuscript I’d written. I had sent the other two around a lot, sometimes with solid leads, and I think that The Room in Which I Work follows naturally from those manuscripts, in that it synthesizes lyric poems with prose and documentary material. What’s different about it is I decided to force or allow all those things to cohabitate—with imagery too—and that the book is really devoted to someone else’s (Nicéphore Niépce’s) life.

2 - How did you come to poetry first, as opposed to, say, fiction or non-fiction?
At the level of word and sound, I think. A natural love of language and a sense that it was an enormous forum for play—silly songs with my siblings, lots of nonsense language with friends. Then, in high school, being assigned to read Whitman’s “When Lilacs Last in the Dooryard Bloom’d” and wanting to make a phrase like that, which could take on a subject as large as the assassination of Abraham Lincoln.

3 - How long does it take to start any particular writing project? Does your writing initially come quickly, or is it a slow process? Do first drafts appear looking close to their final shape, or does your work come out of copious notes?
It depends. The Room In Which I Work really happened in a year and a half, and that had to do, in part, with the duration of the grant I was on while writing it. But I do tend to generate a lot of material, and throw away a lot, and often that is with no project in mind. It’s only after a period of a year or two where I can say, “oh, I’ve been generating a lot of poems about X.” First drafts, for me, do often come close to their final shape, but I think that is also because I abandon a lot of drafts, and they are the rehearsals for the later, better draft, even if they are completely different poems.

4 - Where does a poem usually begin for you? Are you an author of short pieces that end up combining into a larger project, or are you working on a "book" from the very beginning?
A poem for me begins with a line or phrase that occurs to me after having seen or felt something, and in sound and meaning it somehow has accuracy or mystery that needs to be investigated. I think of myself as more of a short-piece writer whose pieces accrete into a book, but the evidence points to the contrary: The Room in Which I Work was definitively a book project from its outset.

5 - Are public readings part of or counter to your creative process? Are you the sort of writer who enjoys doing readings?
They are neither part of nor counter, I would say. I don’t give a lot of readings, but I really enjoy them when I do, so maybe I should do more. There is something about being able to deliver the poems directly that is really important—the pacing, how I hear the poem in my head. And I have had moments of embarrassment in reading aloud a poem that maybe was not finished, and so knowing, really knowing, I had work to do on it. Embarrassment is a great revision tool, I think.

6 - Do you have any theoretical concerns behind your writing? What kinds of questions are you trying to answer with your work? What do you even think the current questions are?
No theoretical concerns, but lots of questions, both concrete and otherwise: How far can language be pushed to show me or make me (and by default others) feel something truthful and new? How do we make sense of our lives? Has anyone heard this before? What has value? Where are we going as a species? Where can the English sentence go? How much time does the earth have left? What’s the responsibility of consciousness? If it’s absurd to be here, what else is it?

8 - Do you find the process of working with an outside editor difficult or essential (or both)?
Essential. I have two very close readers that I’ve known and worked with for years now, and I find their feedback to be crucial in revising poems, and in testing out new modes and silly ideas. The value to me is clear: someone with more distance from the work can see things you can’t see.

9 - What is the best piece of advice you've heard (not necessarily given to you directly)?
My grandfather: “Let the knife do the work.”

10 - How easy has it been for you to move between genres (poetry to photography)? What do you see as the appeal?
It’s been easy and very natural, though I admit that is changing. I seem to be gravitating more towards writing these days, and am having a harder time making photographic work that I feel has any consequence, but I also know from past experience that that can change, depending on what ideas seize me. The appeal, I think, is in letting go of language when I’m working photographically, and having a purely visual vocabulary to employ. And my photographic work, because I work in a way that requires preparing paper and brushing on sensitizer, has an element of the hand in it, which carries an immensely pleasurable and meaningful feel that does not exist when writing. I think each genre affords me space from the other, and also lessons about the other.

11 - What kind of writing routine do you tend to keep, or do you even have one? How does a typical day (for you) begin?
I try to write something new every Friday morning, and then revise and tinker a bit over the weekend and throughout the following week. On a typical day, I get up at 6:10, make coffee, and read for an hour or so before I have to start my life.

12 - When your writing gets stalled, where do you turn or return for (for lack of a better word) inspiration?
Art, the cinema, and walking around. Visual representation is always provocative for me and helps generate poems. And then I sometimes have to reread a poem such as Wallace Steven’s “The Man on the Dump” to remind myself what it’s all about, or just stroll through the city and let things wash over me.

13 - What fragrance reminds you of home?
Baseball diamond dust.

14 - David W. McFadden once said that books come from books, but are there any other forms that influence your work, whether nature, music, science or visual art?
Visual art and movies, as I mentioned, and then travel. As of 2015 I have traveled regularly to Senegal for work, and my experiences there have inspired a lot of new poems: making sense—or acknowledging that trying to make sense is my default reaction, and perhaps not an appropriate one—of all the things that comprise a different culture.

16 - What would you like to do that you haven't yet done?
Live in a Spanish-speaking country so I can finally become fluent in the language.

17 - If you could pick any other occupation to attempt, what would it be? Or, alternately, what do you think you would have ended up doing had you not been a writer?
I would like to be a woodworker.

18 - What made you write, as opposed to doing something else?
I never felt it was a choice. It was always what I wanted to do.

20 - What are you currently working on?
A new manuscript of poems.

Posted by rob mclennan at 8:31 AM
Labels: 12 or 20 questions, Andrew Seguin, Omnidawn