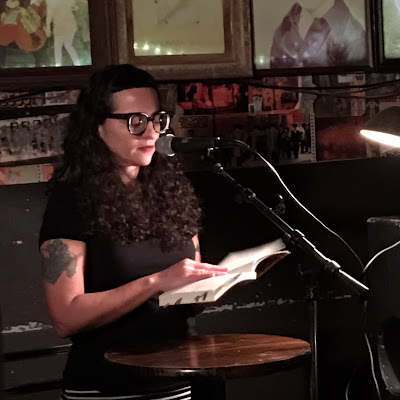 Wendy C. Ortiz is the author of Excavation: A Memoir (Future Tense Books, 2014); Hollywood Notebook (Writ Large Press, 2015); and the genre-breaking dreamoir Bruja (CCM, 2016). In 2016 Bustle named her one of “9 Women Writers Who Are Breaking New Nonfiction Territory.” Wendy’s work has been profiled or featured in the Los Angeles Times, Poets & Writers Magazine, Los Angeles Magazine, The Rumpus, Los Angeles Review of Books, and the National Book Critics Circle Small Press Spotlight blog. Individual pieces have appeared in The New York Times, Hazlitt, StoryQuarterly, Joyland, and many other journals. Wendy lives in Los Angeles, where she is a parent and a psychotherapist in private practice.

1 - How did your first book or chapbook change your life? How does your most recent work compare to your previous? How does it feel different?
My first book was supposed to be Hollywood Notebook; Writ Large Press acquired it in 2013 and we had hoped for a 2014 date, but it got pushed back to 2015. In the meantime, I had been talking with Kevin Sampsell of Future Tense in the summer of 2013, and in the fall of that year, he told me he wanted to publish the manuscript I'd given him in summer of 2014. This made Excavation: A Memoir my first book.

The publishing of Excavation completely changed my life. I was fortunate to be noticed by the Los Angeles Times and the National Book Critics Circle in the first few months of the book's life. For a small press author, this is a good set of circumstances. The book continues to have a long tail--I tell people, and this is still true--I receive one email from a stranger who has read the book at least every two weeks since its publication date. In that sense, I still feel the life-changing effects of that book.

My most recent book, Bruja, feels pretty different. Excavation is in many ways a much more standard approach to memoir. Bruja is a dreamoir, a memoir of dreams. It feels like quite a radical departure on its own or in comparison to my first book, and my second book.

3 - How long does it take to start any particular writing project? Does your writing initially come quickly, or is it a slow process? Do first drafts appear looking close to their final shape, or does your work come out of copious notes?
I typically take weeks, if not months, if not years (really) of just thinking about the project. Ideally it's just weeks. I may take some notes here and there, either handwritten in my notebook or my phone, or no notes at all. My process is often me, hiking, thinking through, forgetting, coming back, thinking through again. First drafts end up very very close to their final shape.

4 - Where does a poem or work of prose usually begin for you? Are you an author of short pieces that end up combining into a larger project, or are you working on a "book" from the very beginning?
It changes. I've worked on a book project knowing full well it would become a book. My last two books were derived from fragments and became book-length. I have ideas about next books, so I know they'll be of that length but I don't know yet whether they'll be poetry, short essays, or long chapters.

5 - Are public readings part of or counter to your creative process? Are you the sort of writer who enjoys doing readings?
As a former curator and organizer of readings (eleven years dedicated to my reading series, Rhapsodomancy), I feel like I enjoyed readings much more than reading myself. In recent years I've found some equilibrium when it comes to doing readings. I would not say it's part of my creative process, but it's not counter to it, either. What I've discovered most recently is that I would much prefer to do some sort of performance that involves not only my text or others' texts but also my body. I want to do less readings and more performance, I think.

7 – What do you see the current role of the writer being in larger culture? Does s/he even have one? What do you think the role of the writer should be?
I don't know if there's "a" role or "the" role of "the writer." There are roles and there are writers. Even in my ideal world there would be writers and numerous roles rather than one overarching one.

8 - Do you find the process of working with an outside editor difficult or essential (or both)?
I may be extremely lucky in that I've always had editors with whom I had an easy relationship. I trust them, they trust me. In the end if I feel like I learned ten things from their editing process, which I usually do, I'm grateful to them forever.

9 - What is the best piece of advice you've heard (not necessarily given to you directly)?
Tend your own garden.

10 - How easy has it been for you to move between genres (poetry to fiction to non-fiction)? What do you see as the appeal?
It's easy. It's ideal if I can imagine a form right away and try it out and it works, but if it doesn't, I'm equally excited to try a different genre with the same material.

11 - What kind of writing routine do you tend to keep, or do you even have one? How does a typical day (for you) begin?
I typically wake up before 7am, make coffee, and write two pages in my journal. If I have deadlines, I write in the afternoon, but my best times to write are the hours before 1 or 2pm. I usually don't write much of anything on weekends, when I like to play dead to the world if possible.

12 - When your writing gets stalled, where do you turn or return for (for lack of a better word) inspiration?
Books I've loved, music, the ocean. I also challenge myself to see everything "new" on the hike I take three times a week. The exercise of forcing myself to find new things has not only un-stalled my writing, but also has worked to keep depression at bay.

13 - What fragrance reminds you of home?
Cigarette smoke.

14 - David W. McFadden once said that books come from books, but are there any other forms that influence your work, whether nature, music, science or visual art?
"Nature" sounds so huge, and yes, it encompasses a lot, but I will say, for sure, NATURE influences my work—specifically the nature around me, the mountains, ocean, and desert. Music is an intoxicating influence and I feel almost too susceptible.

15 - What other writers or writings are important for your work, or simply your life outside of your work?
Lidia Yuknavitch, Myriam Gurba, Maggie Nelson, Cynthia Cruz, David Wojnarowicz, Michael Ondaatje, so much contemporary poetry I find/am exposed to daily online...that's the answer today.

16 - What would you like to do that you haven't yet done?
Make a movie. Do a triathlon.

17 - If you could pick any other occupation to attempt, what would it be? Or, alternately, what do you think you would have ended up doing had you not been a writer?
I did attempt another occupation, and it was as a psychotherapist, and it's what I'm doing now. But had I never been a writer I imagine I would have wanted to direct.

18 - What made you write, as opposed to doing something else?
I have no idea. I've never had a something else or felt like I had much access to a something else. I can't draw. I don't play instruments. It's never occurred to me to not write.

20 - What are you currently working on?
I'm giving myself exercises to experiment with writing screenplays. Meanwhile my brain is working on ideas for two possible books that I don't picture starting to write for a long, long time.