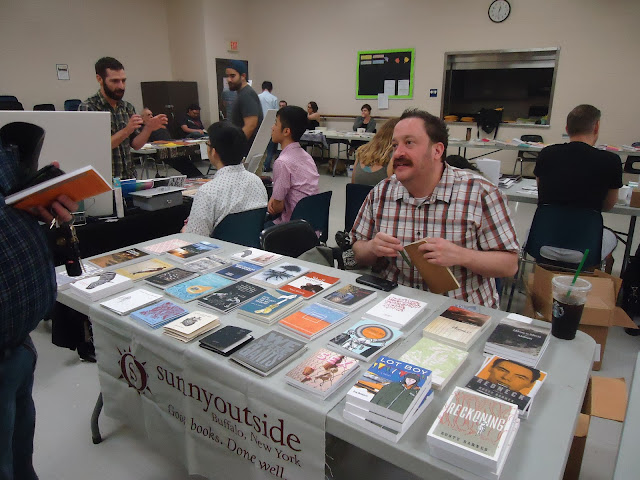 See my prior series of notes on this spring’s fair here. What else did I pick up during our most recent small press fair? Oh yes, these:

Buffalo NY: It was grand to see sunnyoutside participate again in our latest small press fair, and I managed to collect a number of his titles, including New York City poet MRB Chelko’s fourth poetry chapbook, SONG & YES (2015), following the small chapbooks WHAT TO TELL THE SLEEPING BABIES (sunnyoutside, 2010), THE WORLD after Czeslaw Milosz (Dream Horse Press, 2012) and MANHATTATIONS (Poetry Society of America, 2014). SONG & YES is a collection of two short sequences of prose poems, “DECEMBER SONGS” and “JANUARY YES.” As the first poem in “DECEMBER SONGS” reads:

On the street a harsh wind. Eye holes. Torn in a man’s beige turtle neck pulled up. Warmth. I think as he passes. Silence. The demon. Faceless. Some guy offers to buy my gold. I have gold. Rest. I have no gold. Warmth. I dreamt a worm. Slime tinseling a tree. A bell left on a kitchen table. Nudged by my hip. Music of my life. Rest. The tambourines inside me. And the worms. Silence. I sit beside the river. Drink the cool of my own palm. It fills me. Like new. Yes. Like body. You are anywhere but here.

I’m curious about the combination of poetry and prose in these short pieces, and the monthly titles; are these part of some larger project, extending into a full calendar year? There is something of the monologue to these pieces, a staccato and punctuation composed as much to hear aloud as to read on the page. Another piece from the same sequence reads:

Life gets exciting. Yes. Street trash on fire. The cop trying to stop him. Yes. The man with the match. Sir. Your flame. Me stepping backward. Brain in my feet again. Rest. No silver beach here. Silence. Fire. Chain of command. I remember for some reason. The periwinkle of my wedding. Anyway. And a crocus. Winter. Its demanding garden. Its party for one. Silence. In the street. Profundity. I am important. Destroyer. Rest. Get home and respectable. Run. I have something. Like an empty locket. Huge and dangling. Raw and pictureless. Keeping me alive. Silence. Open it. Rest. Open it. 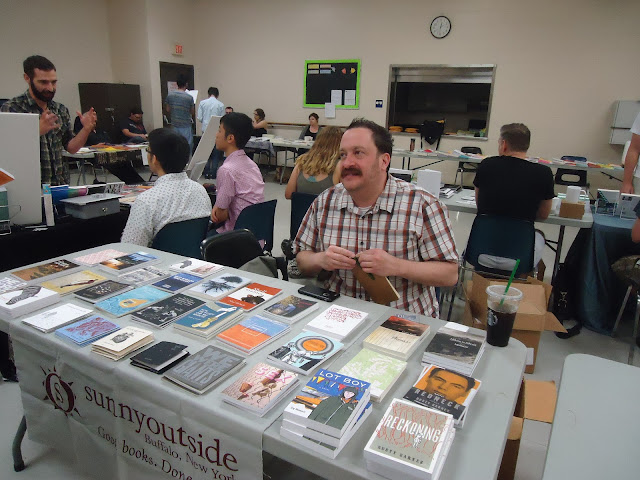 Another title from sunnyoutside was the second of American poet Micah Ling’s three poetry titles with the press, her Sweetgrass (2010). The first I’ve seen of her work, hers is another curious sequence of prose poems, each of which are untitled, and accumulate their ways through and across the landscape and mythos of the American west (specifically rural Montana). As she writes:

Just after noon, when the sun has warmed the ground and dried the sage, grab a well-worn towel and step through the grass like a cattle dog. The heavy gate is closed and instead of swinging it open, kneel and creep under, dirtying your front-side with dust. Dangle feet from the bridge, careful not to catch splinters in bare legs. Prepare for the cold and consider not going through with it, like you do every time. There is no choice at the edge of this dock. You’ve come this far; the horses on the road will expect to see you wet on the walk back. With the next thought you’re in the chill. It’s cold all over, well beyond ice or needles or headaches. The current pushes out—it knows you won’t last. Back on land the sun begins his lies—tempts you to jump again—but you’ve had enough, today.