In the appreciation of a translation, consideration of the mother poem never proves fruitful. Not only is any reference to a mother poem misleading, but even the concept of mother poem is detrimental in the theoretical consideration of translation, since all it posits is the existence and nature of other as such. Transtranslation, in the same way, posits the poem’s physical and spiritual existence, but in none of its works is it concerned with a response. No poem is intended for the reader. (“WRITING THROUGH WALTER BENJAMIN”) 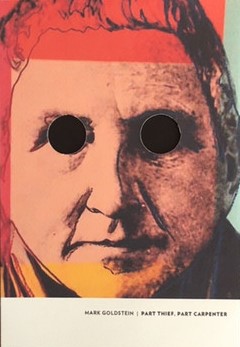 Toronto poet, translator, editor and publisher Mark Goldstein’s latest, Part Thief, Part Carpenter (Toronto ON: Beautiful Outlaw, 2021), subtitled “SELECTED POETRY, ESSAYS, AND INTERVIEWS ON APPROPRIATION AND TRANSLATION,” exists as an incredibly thorough book-length study that opens into a field of thinking; a book about literature, poetic structure and approach. Comprised of essay-scraps, quoted material, interviews, poems and translations and other materials collaged into a hefty study around writing, Goldstein tracks the varieties of ways in which literary work is built. In many ways, this collection expands upon everything he has done through his own writing up to this point, including the suggestion that literary translation and appropriation exist as but two points along a spectrum of literary response and recombination.

The scope and accomplishment of this work is remarkable, opening into a collage of multiple directions, all while furthering a single, coherent argument that connects translation to appropriation—an approach that runs from erasure to recombinant works to more conceptual works. Goldstein argues how all of the above can be seen as a variation on translation: the act of reworking and changing forms (and, for more conceptual works, context). There aren’t too many critics outside academic circles in Canada working on ‘personal studies’ on poetry and poetics in this way, and Goldstein has previously offered that one of his examples and mentors has been the infamous bookseller and critic Nicky Drumbolis, a literary thinker that produced his own life’s work, God’s Wand: The Origins of the Alphabet (Toronto ON: Letters Bookshop, 2002).

Structured into nine chapters, the first four of which are grouped under “ON APPROPRIATION,” and the final five under “ON TRANSTRANSLATION,” Goldstein writes of translation and Paul Celan, one of his deepest and most enduring influences, and how Celan’s work has helped shape his own aesthetic and thinking. He writes on specific works by Caroline Bergvall, Lyn Hejinian, Ronald Johnson, Pierre Joris, John Cage and Charles Bernstein. He writes on flarf, Oulipo and translation. He offers poems, both in his own translation and of his own making. He quotes long passages from multiple writers and thinkers, shaped and collaged together, and in many cases, simply allowing the material to speak for itself. There is an enormous amount of play displayed in the shaping of this collection, and Goldstein is clearly having a great deal of fun working through his research. In one section, he translates a single poem ten different ways, offering translation as a shaping and reshaping of form, playing off structures and rhythms utilized by poets including Susan Howe, Robert Creeley, Amiri Baraka, Ted Berrigan and Gertrude Stein. Through Goldstein, translation isn’t a simple matter of allowing readers of one language the opportunity to experience writing originally produced in another language, but a way in which words are shaped, categorized and shifted, and the possibility of a far more open sequence of choices.

It is interesting in how Goldstein assembles his collection of thoughts and research, offering, in many cases, passages without specific editorial commentary, allowing the reader the space in which to enter and experience. Writing extensively through examples including Ronald Johnson, Marjorie Perloff, Ron Silliman and Gertrude Stein, he makes his way into Oulipo, including more controversial works by Vanessa Place and Kenneth Goldsmith. While Goldstein’s study isn’t one of judgement but of research and thinking, it is curious to note the inherent failure of the “pure project” through the examples of Place and Goldsmith: by moving so far beyond the human element, their projects couldn’t help but prompt devastating emotional effects. Goldsmith’s “The Body of Michael Brown,” for example, overtly triggered and re-triggered a wide array of generational emotional trauma, including that of yet another white man utilizing the body of a dead black man for his own purposes. The “purity” of this particular project, however approached, seemed both naïve and even malicious for his deliberately dismissal of such potential effects. Instead of offering his own commentary, Goldstein offers one by Illya Szilak, published online at the Huffington Post, that includes:

Goldsmith’s writing and performance of “The Body of Michael Brown” is problematic, not because he does not have the “right” to use the text, but because his use of it is fundamentally false. Not only does he hubristically presuppose that texts, like dead bodies, are neutral objects that can be cut and sutured without doing harm, but, as one young black woman suggested in our discussions the next day, he assumes he can take the language of the autopsy report into his own body.

Goldstein is the author of three full-length poetry collections—After Rilke (2008), Tracelanguage: A Shared Breath (2010) [see my review of such here] and Form of Forms (2012) [see my review of such here]—all of which were produced by the Toronto publisher now known as Book*hug, where he had long been working as a book designer. All three collections, as well, shaped their ways through variations on translation, or response, shifting material to shape a manuscript around Rainer Maria Rilke, Jack Spicer, Paul Celan and his own birth mother, respectively. It is interesting that Spicer doesn’t hold as much weight in this collection in terms of translation, or response, given his infamous take that he wasn’t a writer in the traditional way, but simply a receiver of writing from the outside (from the “Martians,” specifically). But one might think that to offer Spicer’s approach on a spectrum of translation might then, beyond that point, that all creation is, in fact, a matter of building something new out of what we already know. As Goldstein responds in one of the interviews included in this collection:

The work comes out of an isolation that amplifies a kind of inner vision made manifest through words begged, borrowed, or stolen. As Spicer has written, “it’s a lonely and distant community with most of its membership deceased.” So, it’s tough going much of the time. There’s little to be said and the stakes are so small, especially where poetry is concerned. Spicer, Celan, and Rilke knew this. And so their works remain vital to our own. This also may have something to do with that shared sense of despair when facing any creative act: I’ve said this of translation, more specifically, that there’s no “poem” there. By this I mean that words are encampments around absence – that field of energy beyond description. Yet we write, clumsily, work with words, seeking something in the chaos, or perhaps chaos itself – but we seek.

Goldstein makes his case just as much through the ways in which his archival material (including his own essays, and interviews conducted with him about his work over the years) is shaped together, and allowing it to speak, without him in the way of our reading. There is something reminiscent of Toronto novelist Barbara Gowdy’s mute character Joan from Mister Sandman (1996), who records the conversations of everyone around her, shaping the discord into harmony. Not that there is no commentary throughout, obviously, but Goldstein choses his words, and his moments, carefully. As the late Saskatchewan poet John Newlove wrote as part of “White Philharmonic Novels,” from his collection The Night the Dog Smiled (Toronto ON: ECW Press, 1986): “Look, nobody gets wise writing / Now I must be making / pretty manners / at you / It’s necessary to realize that all these phrases / are stolen. The arrangement is all.”

How shall we characterize this strange discourse, a discourse that is surely no closer to prose, which I shall define here, following Northrop Frye, as “the arrangement of words … dominated by the syntactical relations of subject and predicate” – in other words, the sentence – than it is to verse, which is the arrangement of words dominated by “sonic form of regular occurrence, whether meter, accent, vowel quality, rhyme, alliteration, parallelism, or any combination of these.” Indeed, if we had to choose one term or the other to designate this passage we might as well want to call it verse [.]