I began this book in the fall of 2002. Initially, it was entitled From Shore to Shore. And it was so named when I traveled to Sage Hill in the summer of 2005 to work on the manuscript with Nicole Brossard, who gave me the courage to continue writing it. Winter of 2006, I workshopped the text in Toronto with Betsy Warland who taught me how to breathe the line. From 2009 until pre-publication in 2012, I shared it with my generous and supportive editors, Phil Hall, Jaclyn Piudik and Nick Drumbolis. And so this book became Form of Forms. (“Acknowledgements”)

I’m intrigued by what Toronto writer and designer Mark Goldstein says he learned by Vancouver writer Betsy Warland in the acknowledgements of his third trade poetry collection, Form of Forms (Toronto ON: BookThug, 2012): “who taught me how to breathe the line.” The long poem/book Form of Forms has a generous amount of breath-space, something that few Canadian poets really understand how to use properly, but for notable exceptions such as Warland, Sylvia Legris and the late bpNichol. Such an amount of space to breathe in a poem is a rare quantity, and Goldstein’s poem understands not only breath, but the space required to hold and release that same breath.

there is
a yearning

for that which is
feared

Stretching out into poem-sections—“Creation,” “Preservation,” “Destruction” and “Quiescence”—Goldstein’s Form of Forms is highly charged, and the poem composes its own breakdown before attempting to re-assemble, through both form and content. Mark Goldstein, we learn, is adopted, and attempting to reconcile exactly what that might mean for who he is, who he was, and possibly, who he might have been. There are directions pointed to of attempts to learn, many of which are thwarted through various agencies, or provide simply not enough information, or the answers he may have been seeking. Dislocation: the entire collection/poem is built upon it. The topic of adoption, being the child of adoption and seeking out that empty space is certainly an emotionally-loaded one, but the work itself is understated, responding and recording, even sketching out a kind of calm.

start with a lie

(it goes without
saying)

a sequence of telling
the simple

child
may believe      everyone 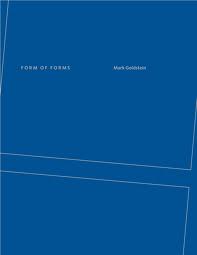 This is Goldstein’s third trade poetry collection, after the volume After Rilke (BookThug, 2008) and Tracelanguage: A Shared Breath (Toronto ON: BookThug, 2010), and Form of Forms merely reconfirms Goldstein as a poet of book-length projects. Composing his first trade collection through the lens of Jack Spicer and Rilke, and his second through the lens of Paul Celan’s Atemwende, both collections are thematically built, and move through the work of other poets, both removing the author, and centring the author through a particular kind of camouflage. In Form of Forms, Goldstein has composed a poem through the lens of his own doubling, writing against that as-yet-undiscovered part of himself, making it difficult to hide, but easy enough to distract, or even self-create. There’s a passage by Jeanette Winterson I seem to be quoting endlessly lately that seems to apply here as well:

It’s almost as though he has been moving further towards a comfort with a particular kind of grounding through being groundless. As Goldstein wrote in the acknowledgments of Tracelanguage: A Shared Breath: “One would like to feign accuracy where there is none […]. In exhausting this hope, we need no longer circle the poem seeking rest having accepted its groundlessness.” Form of Forms struggles with the narrator’s sense of self (can we presume the narrator and the author share word for word all?) but ends up creating that self through the process. This is Goldstein not only composing his Form of Forms but as a reformation, after too many questions have not yet been answered. In the end, for both poem and the sense of the narrator’s self, structure must come from within, the most heartbreaking and uplifting conclusion Mark Goldstein’s Form of Form knows only too well.