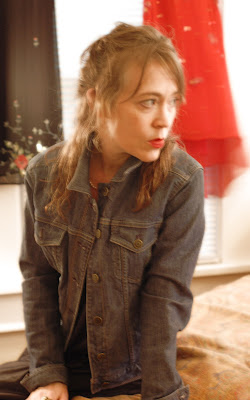 J.L. Jacobs lives and writes in Norman, Oklahoma. She studied art, photography and literature at the University of Oklahoma and poetry in Brown University’s MFA program. Her work has appeared in such journals as Ploughshares, New American Writing, New Orleans Review, American Letters & Commentary. Books include Varieties of Inflorescence, Leave, 1992 and The Leaves in Her Shoes, Lost Roads, 1999, and the chapbook DreamSongs, above/ground press, 2004.  Representative work appeared in American Poetry: The Next Generation from Carnegie Mellon University Press, 2000. Recent work has appeared in Fascicle and Octopus.

1 - How did your first book change your life? How does your most recent work compare to your previous? How does it feel different?
a.  Finishing the first book meant I completed graduate school.  The first book kind of calls you on to the next and the next.  Getting it published gives you the courage to keep at it.

b. Recent work is my old aesthetic gone awry.  I no longer try to be willfully obscure for its own sake.  I no longer (always) wear a mask b/c I am afraid of what this or that camp thinks I'm up to.  Now I rhyme, hard rhymes; I would never have done that before I had a close call with mortality that involves my spinal cord and nerves.  I started feeling the vibration of everything...including earthquakes no one else felt but were registered by the seismographs...I started being able to tell what key a piece of music written in a key was in..(unfortunately this did not last after beginning to recover)...but I began hearing everything differently in my head.  It was more than just the image that moved me to write. It was now  sound.  c. It feels friendlier; less like a cold artifact in a museum that is elegant, but untouchable.  My earlier work feels untouchable in that way.  Recent work is much more O'Hara-esque in its friendly gait and moving on.

2 - How did you come to poetry first, as opposed to, say, fiction or non-fiction?
Books as a child...Dr. Suess, Mother Goose.  In college, by happy accident, I took Elizabeth Robinson's Contemporary Fiction class.  She had us write two poems.  She invited me to study in a Directed Reading with her the upcoming Fall.  I did.  And, well, changed from looking at grad school in photography to looking at MFA programs, and the rest fell into place at Brown.

3 - How long does it take to start any particular writing project? Does your writing initially come quickly, or is it a slow process? Do first drafts appear looking close to their final shape, or does your work come out of copious notes?
Both. But, usually, it comes pretty fully formed.  There are days and days of absorbing, composing when you wander around inside or out...caught, lost in doorways...then in a few days, whatever it is will wake you up early and so begins a new project. But this is the way it works for me for the whole process, not just the beginning. I think I first encountered copious notes with the novel because it required more research.  Poems are charged moments which spring up involuntarily in my head. A sight, sound, smell or bit of overheard song or conversation. Something gets tripped in my head, and the poem begins with two lines and you realize you'd better find paper because more are on the way. The novel certainly had a forward propulsion, but often the movement was toward the research; the writing coming together after it had all sifted in and the flour dust settled.

4 - Where does a poem usually begin for you?
See answer above.

Are you an author of short pieces that end up combining into a larger project, or are you working on a "book" from the very beginning?
Again, both.  I'm often consciously working on a larger project, like in Streets as Elsewhere, I was exploring women's sort of underground connections in a backbackwater area in the years after my Grandmother's mid-wife practice.  My first book was about her mid-wifing practice among hillfolk at the place where the Trail of Tears ended for many.  She was revered, delivered babies of every colour. But, I realized in writing the first book that these women who gathered to quilt or walk for cakes had powerful connections that were tacit.  They almost all had husbands, but they sort of run in different circles.  I wanted to understand the
silent, solid structure of that little community of people.

5 - Are public readings part of or counter to your creative process? Are you the sort of writer who enjoys doing readings?
Love readings, both listening and reading.  I don't really consider it part of the process...it's like the cake. It's the public ritual of celebration by the fire, so to speak.  The gatherings and the proferrings.  It is part of why practice of poetry exists I think.

6 - Do you have any theoretical concerns behind your writing? What kinds of questions are you trying to answer with your work? What do you even think the current questions are?
I've tried to keep theory behind the praxis and not the other way round.  Always been a lyric poet, who ducked and dodged being put into this here or that there camp. This question makes me think of a C.D. Wright quote: "Theories are beautiful, but they are feeble."  I'm over pretending I don't like things I do.  I'll admit Frost and Bishop and many more.  I've come to embrace the canonical, as well as the non-canonical.  I'm not sure I was ever able to clearly articulate the theoretical concerns without growing dizzy and weary and doubting myself.  The questions I've explored include geography of place and people, the Trail of Tears, bird-life, my own near death experience with spinal cord injury, and weather & environment, vegetable, animal, human.

7 – What do you see the current role of the writer being in larger culture? Does s/he even have one? What do you think the role of the writer should be?
To tell the complete truth I think our role is twofold: we sing the "almost imperceptible" as C.D. Wright says, and we heal ourselves and others, hopefully.  Are we still the unacknowledged legislators of the world? Maybe.  I'm not sure anymore.  But I think we are the sort of priest / healers who offer ritual sacrifices in public reading venues.  We cannot afford to be selfish; we have responsibility to live mindfully and to sing the songs of praise and lament of the world we find ourselves in.

8 - Do you find the process of working with an outside editor difficult or essential (or both)?
I've not enough experience to answer this one.

9 - What is the best piece of advice you've heard (not necessarily given to you directly)?
I've thought about this a great deal.  I think, for me, "choose your battles," "mind your manners," and "discretion is the better part of valor" are up there, cliches or not.

10 - How easy has it been for you to move between genres (poetry to photography)? What do you see as the appeal?
I segued into poetry from photography one hundred years ago when we used film.  My early poems were often like still lifes, relying heavily on the visual element of aesthetics.  It felt natural to move between the two. And, it was not until I participated in the Bayou Reading Series with Jeff Mims did I discover sound. Sound in me.  Now I can't close that door.  There were some unusual things that went with having my spinal cord almost severed.  I could hear things like you can't imagine.  The key a piece of music was in, for example.  I was all vibration and colours and sounds and words...the downside was unbearable pain. Moving into fiction is much more difficult, though I did finish a novel during that painful time.

11 - What kind of writing routine do you tend to keep, or do you even have one? How does a typical day (for you) begin?
Short walk with Fritz (Bishon Frise). Coffee. Check email & fb.  I keep paper and pencils handy, as I often find myself hearing a couple of lines in my head while doing laundry, baking, or walking my pooch.  Coat pockets full of notes which I type up later.

12 - When your writing gets stalled, where do you turn or return for (for lack of a better word) inspiration?
Usually, nature or music...mostly classical.  I think it effects your neurotransmitters.  Don't we know it does?  I think we know that.  I feel that way.

14 - David W. McFadden once said that books come from books, but are there any other forms that influence your work, whether nature, music, science or visual art?
For me, it is moreso everything but other books. Maybe other poems, or bits of poems that I can't get out of my head. Songs. Instrumental music mostly. Songs in languages I can't understand.

16 - What would you like to do that you haven't yet done?
See my second full-length collection published.  Parasailing is now out.  But, I'd like to see the Emerald Grotto at evening time.  And explore the Amalfi Coast.

17 - If you could pick any other occupation to attempt, what would it be? Or, alternately, what do you think you would have ended up doing had you not been a writer?
In an alternate universe somewhere I am an ACLU attorney. If they don't have ACLU, then something like that.  Law in the public interest.

18 - What made you write, as opposed to doing something else?
An happy accident, a life changing encounter with one Elizabeth Robinson in 1989 my senior year of college. Downsided, up. Ever. After.

films...I thought I'm Not There was pretty nearly great.

20 - What are you currently working on?
a collection of poems just called After Amsterdam for now, and a scholarly article on neurological synaesthesia and poetry which looks closely at Ashbery, C.D. Wright, Bishop, De Chirico, Messiaen, which comes out of my work on Ashbery and Messiaen co-authored with Ronald Schleifer and published in Philological Quarterly.