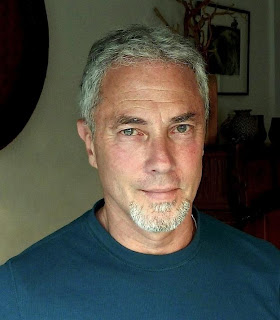 AARON SHURIN is the author of eleven books, including the poetry collections Citizen (City Lights, 2012), Involuntary Lyrics (Omnidawn, 2005) and The Paradise of Forms (Talisman House, 1999), a Publishers Weekly Best Book; the prose collection Unbound: A Book of AIDS (Sun & Moon, 1997); and most recently, King of Shadows, a collection of personal essays, published by City Lights Books in 2008. His work has appeared in over thirty national and international anthologies, and been translated into seven languages

Shurin's honors include fellowships from the National Endowment for the Arts, the California Arts Council, the San Francisco Arts Commission, and the Gerbode Foundation. He is a Professor in the MFA in Writing Program at the University of San Francisco.

1 - How did your first book change your life? How does your most recent work compare to your previous? How does it feel different?
The air here is thick with impending rain, the body thick with unaccustomed altitude. My early work was less thick than my current work, less layered, less textured, less “maximalist.” It was sometimes governed by rhetoric, and a bit more interested in persuasion rather than discovery. Nevertheless, my first book confirmed that my decision to move to San Francisco to make the Gay Revolution and live as a poet was on course.

2 - How did you come to poetry first, as opposed to, say, fiction or non-fiction?
A handsome, smart Mexican man I met wouldn’t or couldn’t stop talking, so I had to shut him up with kisses. Later, I was most interested in the zeroing-in of my eyes on his moving lips as I made the decision to lean in, rather than the scene or what he/we said. That perceptual gesture or image, the nuance of it, its embedded light, seems to me to belong to poetry more than prose, and from the time I first put on my poetry goggles in earnest my interests lay in uncovering such delicacies.

3 - How long does it take to start any particular writing project? Does your writing initially come quickly, or is it a slow process? Do first drafts appear looking close to their final shape, or does your work come out of copious notes?
Two years ago in Guanajuato I wrote nine of the poems in Citizen, in about a month. That’s pretty fast, but consistent with the rest of the book, which had a clear start that kept composition humming. In general drafts resemble the final poem closely; my poems are usually written in a sitting and don’t rely on notes, except insofar as a constraint, say, requires it.

4 - Where does a poem usually begin for you? Are you an author of short pieces that end up combining into a larger project, or are you working on a "book" from the very beginning?
Usually begins with a phrase, which may be overwritten by a sound, like the water deliveryman who calls out in the street, “agua ciel… agUA ciELLL!” More and more a book hovers as I write.

5 - Are public readings part of or counter to your creative process? Are you the sort of writer who enjoys doing readings?
Totally generative. Who would the agua ciel man be if he just passed out a flyer?

6 - Do you have any theoretical concerns behind your writing? What kinds of questions are you trying to answer with your work? What do you even think the current questions are?
My late-blooming love affair with Mexico has centered on my sense of the culture’s relational integrity, the feel of public common space and common… eyes? The living correspondences. My theory would raise correspondences towards the subtleties of existence and the convergence of many ways of meaning.

8 - Do you find the process of working with an outside editor difficult or essential (or both)?
NA

9 - What is the best piece of advice you've heard (not necessarily given to you directly)?
The lovely man from question two’s parents, he told me, had been hippies (like me), but, they told him scoldingly, grew out of that. I never grew out of it, so: The love you take is equal to the love you make.

10 - How easy has it been for you to move between genres (poetry to critical prose)? What do you see as the appeal?
I kissed that guy; I also watched him talking too much and watched me watching. I scrutinized and parsed the way he was dressed and also tore off his clothes. I heaved when he called me “papi” [Ay, papi!] and also try to analyze the power dynamics in U.S./Mexico erotics. Poetry and poetics, two necessary sides.

11 - What kind of writing routine do you tend to keep, or do you even have one? How does a typical day (for you) begin?
No typical routine, except when I’m in it, I’m all the way in, carrying it everywhere, composing anywhere, even stopping in the street or — often — on a park bench: in calle Cantanaras, in plazuela Mexiamora, and “Obregon” or Zopilote café.

12 - When your writing gets stalled, where do you turn or return for (for lack of a better word) inspiration?
I’m patient; it’s rainy season: when the afternoon thunderstorms rip, I wait for the sky to clear.

13 - What fragrance reminds you of home?
The fragrance of this casita is wet cobblestone and mango.

14 - David W. McFadden once said that books come from books, but are there any other forms that influence your work, whether nature, music, science or visual art?
I’m a sky man — this roiling afternoon sky with great cumulous bombs — and a tree man — the sculpted shade trees in el centro are formal but not fussy, and as implacable as Mayan pyramids — and a hills man — “breathless again — totemic vista — on this incline in the clamorous hive…”

15 - What other writers or writings are important for your work, or simply your life outside of your work?
A long parade of heroes. On the plane over an old campesino — must have been 90 — with straw hat and rope-tied pants rolled up, shuffled along in precarious, mincing steps (everyone deferred to him) a bit like a puppet and by accident a dancer. In fact, years ago in Patzcuaro, I’d chanced upon an evening of folklore dance, which included the famous dance of the viejitos, in which a group of young men adopted the beards, outfits, and halting gate of very old men in a kind of clog dance, whose tender evocation was flawless, but which also made it seem as though the old men were bursting with life. The campesino looked and moved exactly like the dancers, so that for me as I watched him the art and life were consonant, mutually evoking. Writers who do that are important to me.

16 - What would you like to do that you haven't yet done?
I would like to write a poem as perfect as the words “azul” and “madrugada.”

17 - If you could pick any other occupation to attempt, what would it be? Or, alternately, what do you think you would have ended up doing had you not been a writer?
I would be a painter, so I could paint “azul” and “madrugada.”

18 - What made you write, as opposed to doing something else?
Necessity, urgency, a need to roll around in language, as if I might find my true self only in the rising swell of “agua ciel!”

20 - What are you currently working on?
The bells are chiming, the dogs are barking, the sun is steaming, the bougainvillea is flaring, the men are carrying giant jugs of water up and down the winding street… The ruling party’s back in power… Cloud shadows cube the hills. Age has thickened me and thinned me at the same time. “Ay, papi!” Let me write it all down.