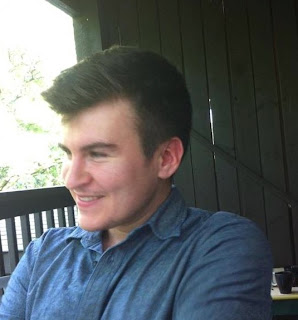 Andrew McEwan is the author of the book repeater, published by BookThug, and the chapbook Input / Output, published by Cactus Press. His writing has been awarded the E. J. Pratt Poetry Medal. He will be moving from Toronto to Vancouver in September.

1 - How did your first book change your life? How does your most recent work compare to your previous? How does it feel different?
repeater is my first full-length book. It has been incredible to see a project and idea that I put so much time and thought into be realized in a way that I could share it with readers.

It's different than my previous chapbook, Input / Output (Cactus Press), in that it is a cohesive conceptual unit with an overarching form, rather than a collection of short, individual poems. The two projects are thematically related though – both centered on ideas of communication, code and technology.

2 - How did you come to poetry first, as opposed to, say, fiction or non-fiction?
I came to poetry because, unlike the majority of the works in those other forms, it makes art out of language (rather than, perhaps, stories, narratives, etc.) and because it does, it threatens communication in a provocative way, which I feel adds intensity to the experience of it.

That said, thinking in terms of genres can be limiting. There are writers identified as working in fiction and non-fiction that I feel a greater affinity with than some writers working in poetry.

3 - How long does it take to start any particular writing project? Does your writing initially come quickly, or is it a slow process? Do first drafts appear looking close to their final shape, or does your work come out of copious notes?
My writing often comes from research. I tend to get an idea that I find interesting and work on it while reading the science, literature and philosophy that are related to it. During this time, writing feels more like juggling a pile of scrawled notes and an even bigger pile of library books. After initial research I try to find a relevant structure to use for the piece based on some aspect of my research (for repeater it was the ASCII binary code). Once I’ve begun to write, sometimes the experience of playing with the material influences me to adapt the structure. So although my works are usually mapped out before the real writing begins, this structure is also influenced by the process of writing.

4 - Where does a poem usually begin for you? Are you an author of short pieces that end up combining into a larger project, or are you working on a "book" from the very beginning?
This overlaps with my answer in 3, but I write in terms of projects. These are always long sequences, but not always necessarily thought of in terms of a book. repeater was written with the initial sequence, “repeater” first, which then led investigating similar interests in other projects which formed the so-called “Appendices” in the book.

5 - Are public readings part of or counter to your creative process? Are you the sort of writer who enjoys doing readings?
Readings are necessary, and I see the value in it, but I can’t say they’re my favourite aspect of writing. Engagement with people is great, but I feel more comfortable talking to people one on one about poetry than standing up on a stage.

6 - Do you have any theoretical concerns behind your writing? What kinds of questions are you trying to answer with your work? What do you even think the current questions are?
I see repeater participating in a few theoretical concerns. First, the influence of “pataphysics is integral to the book, and underlies the method of pseudo-scientific investigation into computing I did in repeater. “Pataphysics, a “science of imaginary solutions”,  to quote Alfred Jarry, allowed me to see the value of scientific methodologies to the process of poetic creation. By turning the structures of scientific discourse away from the purpose-driven uses for which it is normally employed, it allowed me to think of poetry as quite literally experimenting in a subject it doesn’t normally enter into. In repeater, this took the form of positing the idea of a poetic code lying beneath the computer code, which itself lies beneath the letters of the alphabet as they appear on our computer screens.

My work is also generally non-expressive and conceptually grounded, in the sense that it doesn’t deal with emotive concerns, and instead is usually driven by a structural idea used to investigate relationships and tensions. This vaguely corresponds to some trends in poetics, but I don’t feel a strong affiliation with any proposed movement or school of poetry.

8 - Do you find the process of working with an outside editor difficult or essential (or both)?
I don’t have a lot of experience working with an editor, but input from other writers is key to questioning aspects of my writing that I may have taken for granted. It opens up the blind-spots in a work.

9 - What is the best piece of advice you've heard (not necessarily given to you directly)?
On her BBC documentary, the art critic and nun, Sister Wendy, said that all you need to understand art is a chair. I watched it about five years ago but still think about it a lot. It can be applied widely.

10 - How easy has it been for you to move between genres (poetry to critical prose)? What do you see as the appeal?
I find it relatively easy, since the underlying ideas often remain similar. They’re different tools with different benefits; but I enjoy poetry more because of the elements of formal manipulation I can employ.

11 - What kind of writing routine do you tend to keep, or do you even have one? How does a typical day (for you) begin?
See answer 3, because it depends on what stage I’m at in a project. I try to work on a current project most days for a couple of hours. I prefer to think about it as a scheduled task. I could be better at sticking with my schedules though.

12 - When your writing gets stalled, where do you turn or return for (for lack of a better word) inspiration?
My writing usually gets stalled as a result of some aspect that’s not working in the structure of the piece, rather than the specific lines or material. If it does, I try to experiment with tweaking the form so that it works better.

13 - What fragrance reminds you of home?
The smell of the wind coming off of Lake Huron.

14 - David W. McFadden once said that books come from books, but are there any other forms that influence your work, whether nature, music, science or visual art?
I like researching topics, so most of my work comes from a dialogue with another field or discourse, often technical in some way.

But, I also enjoy seeing how artists working in other fields – especially music, performance and gallery art – solve similar artistic ideas that I am thinking about, or introduce me to new concerns.

15 - What other writers or writings are important for your work, or simply your life outside of your work?
Right now I’ve been writing on and reading bpNichol a lot, especially the Martyrology and his series of poetics(-ish) books Love, Zygal, Art Facts, and Truth. I’ve also been looking into the philosophy of Emanuel Levinas. I find both of these writers take me to places I’m not naturally comfortable in writing and thinking about. In Nichol it’s a playfulness and humour, and in Levinas it’s an intense concern with the nature of social responsibility in its most basic form.

16 - What would you like to do that you haven't yet done?
Take a project outside of the book, whether into a performance or exhibit. I really admire writers who can apply their ideas and work in multiple different media.

17 - If you could pick any other occupation to attempt, what would it be? Or, alternately, what do you think you would have ended up doing had you not been a writer?
Writing poetry isn’t an occupation (at least it isn’t for me, or anyone else I know). Because it’s not financially viable, it takes extra effort and intention. This isn’t a bad thing.

My current dream “other” occupation would be as a framer on construction sites. I like making boxes and rooms (see answer 20).

18 - What made you write, as opposed to doing something else?
I like writing and the literary arts because language is something so basic to how we understand and interact with the world. By manipulating this medium, poetry and other forms can create incredible resonance and intensity by questioning the reader’s linguistic engagement with the world. As a reader, when I sense this type of interplay in a literary work it heightens my experience of it in a way that I don’t get from other art forms. I write because I want to explore the creation of such experiences.

The last great film I watched was either Mulholland Drive or Moonrise Kingdom (I’m a sucker for Wes Anderson).

20 - What are you currently working on?
Right now I am working a book of twin long poems that engage with ideas of spatial interaction. The first, “Room Building”, works to write space without people. It does this through writing the poem as a static room. Its counterpart, “Guided Tour”, writes people without space, and takes the form of a transcript of a guided tour that tours its own process — a tour of a tour. I see this project moving into an investigation of the ways the poem exists as a physical space.