I have never been to Japan
but I’m sure they’re doing their best
over there. 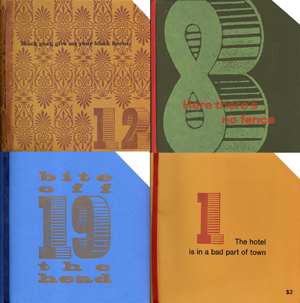 With summer comes a number of things, including the summer issue of Ugly Duckling Presse’s 6x6, a journal with lovely letterpress covers produced out of Brooklyn, New York. As each issue includes roughly six pages of poetry each by six authors, this issue is the first I’ve seen (admittedly, I’ve only seen about four issues) without a single author I’ve previously heard of: Steve Muhs, Dot Devota, William Minor, Martha Ronk, Levi Rubeck and Abraham Adams (although there is always the possibility I’ve seen one or two of their names in a journal and managed to let their name slip away from me). After having gone through the issue a couple of times, I have to admit that I’m stuck on the work of William Minor; who is William Minor? His use of repetition is lovely, and his poems evoke a particular kind of rare subtlety that ease into startling places, while leaving plenty of open space in such small containers, spaces that could easily go in a number of directions. I would sure like to see more. His pieces here are reminiscent of some of what I’ve seen from Rae Armantrout, Sarah Mangold and Marilyn Irwin, and suggest far more than they manage to say, and what is said is delivered deceptively straight. Listen to this, the first section of the three-poem “BEIJING,” that reads: