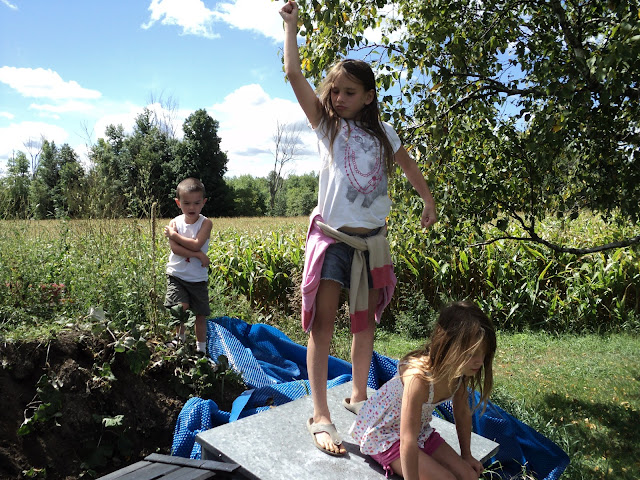 Do you know where summer disappeared to? I had rather hoped there’d be a bit more of it, around. But with autumn comes so many other things that a boy can look forward to (some forty days to the wedding, she tells me…). This past weekend, I was able to spend a day or so with my sister’s wee children (as she and her husband went to a golf tournament). A later August day, too cool for the swimming pool, so they played on a mound of dirt. Really?

And I’m sure you’ve been following my progress as editor during my month-long tenure at TRUCK, or the current above/ground press magnificent summer sale, celebrating our nineteen long years? Or the fact that I’ve now posted information on the fall 2012 ottawa small press book fair, now eighteen years old?

And why is it I get so many American chapbooks (which I love) and so few Canadian ones (which I would like to have the chance to also love)? Most of the chapbooks I receive by Canadian writers, it seems, are those produced by non-Canadian presses (Corrupt Press, Tinfish, dancing girl, unarmed). What’s even that about? I ask, I beg, I request…

Corvallis OR: From Sacrifice Press, I recently received a small handful of chapbooks they were attempting to produce monthly (the press is currently on hiatus), including Trick (March 2010) by Chris Kraus, 32 SNAPSHOTS OF MARSEILLES (April 2010) by Guy Bennett, whomeanswhat (June 2010) by Lars Palm, and Proverbs, From the INBOX Project (November 2010) by Jonathan Ball. Over the past few years, Winnipeg filmmaker and writer Jonathan Ball has been producing increasingly interesting works, and there’s already a new title forthcoming (but you just have to wait for it).

Possible Interpretation: Here talk means carries weight, in the sense that
it is influential. Life’s a bitch and then you marry one. Love is blind. Drink
deep, or taste not the Pierian Spring: There’s no accounting for taste.
Look after the pennies and the pounds will look after themselves. Jove
but laughs at lover’s perjury. Rules are made to be broken. A coward dies
a thousand times before his death. The valiant never taste of death but
once. All work and no play makes Jack a dull boy. What you see is what
you get. You can’t run with the hare and hunt with the hounds. A good
surgeon has an eagle’s eye, and lion’s heart, and a lady’s hand. All’s well that
ends well. People who live in glass houses shouldn’t play golf. There ain’t
no such thing as a free lunch. Rolling stone gathers no moss. Fools rush in
where angels fear to tred. You can’t get there from here. Advice when
most needed is least heeded.

Ball’s chapbook Proverbs, From the INBOX Project suggests that this is part of a larger, book-length project, and the collage aspect of the work makes me interested to see how the work will hold together as a larger manuscript. Where is all of this leading?

Possible Interpretation: A need kept a secret will never be addressed. A
fellow describing the distinction between coral and king snakes. Life’s a
bleach and then you dye. It’s not the size of the boat.

Los Angeles CA: Nearly a year later, tricklings of dusie 5 kollectiv items appear still, with the appearance of Larkin Higgins’ poetry chapbook of materials, implements (2011). I’m very intrigued by the poems included here, intrigued by the stretches of open space, the lines pulled apart from themselves to understand the pauses and gaps inherent, echoing some of the rare spaces of poet Emily Carr.

No Sinecure : influenced by aire

open from the force of the impact

gether in my hand?

some things are worth pay-