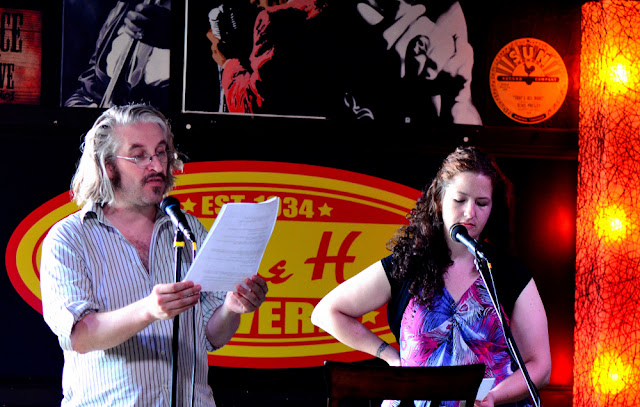 Here’s a photograph that Luminita Suse was good enough to take of Christine McNair and myself reading a month ago at The Dusty Owl Reading Series, a pic of the two of us doing the first reading of our work-in-progress collaboration, launching the little chapbook that went along with same. Some fifty days to our wedding, if you can believe it. Apparently the countdown occurs every time she logs into the wedding website.

If you’re in Montreal tonight, Christine launches her BookThug title alongside Andrew McEwan, at Argo Bookshop. I’ll be there too, but as audience only. You should totally come. And don’t forget to keep checking Halvard Johnston’s TRUCK during August, as I’m curating an entire month’s worth of poems. Who could ask for anything more?

Calgary AB: I’m noticing that a number of the items derek beaulieu has been producing recently under his NO press are looking more and more like a number of the works he made back when he was still producing housepress. Have the two presses, current and former, simply merged? Either way, I always appreciate seeing new work he’s produced, easily the best Canadian source of experimental concrete, conceptual and/or visual poetry, among other works. Sina Queyras’ “Let Your Poem Go” is a lovely single-page piece that ends “The poem / wants what it wants: / to be passed along, / memorized, spoken // by more and more / new and beautiful / tongues.” Even with two babies in tow, might we have much longer to wait for a new trade collection of poems? Other works in this NO press mailout include “Perspired by Iceland’s Sweat: A Report,” Steve Gaisson’s “Je Suis Un Véritable Artiste,” Vanessa Place’s “Like Something in the United States,” and “PANTONE 185C: A Poem from Jon Paul Fiorentino,” that begins:

There is a mostly red, cylindrical ashtray. Right there. On a picnic table. Concentrate. It is mostly empty. You will notice there is one half-smoked cigarette in it. A Viceroy. The red ashtray on the picnic table is in the park and so are you.

Does the ashtray belong to someone? No. It did but it doesn’t. What kind of red is it? You don’t know the name for it yet. It’s similar to what’s left of the red on your nails. You tell yourself Pantone 185C. It is Pantone 185C.

The package also includes the expansive Helvetica Neue by Emma King, a beautifully produced book composed as “a series of visual compositions created using individual letters of the alphabet. Each composition is made from a single uppercase letter taken from the sans serif typeface Helvetica Neue. This book is a collection of typographic experiments that celebrate both the form of the letter itself and the character of that typeface.” Still, the real highlight of the whole envelope has to be The Lungs: A Draft by bpNichol, for the new information presented in the colophon; a piece “Excerpted from bpNichol’s Selected Organs: Parts of anAutobiography (Black Moss Press, 1988) which is slated for a new edition shortly […].” Really? From whom is this new edition coming, and when?

Ottawa ON: At this past edition of the ottawa small press book fair (check over the next month for dates and details on the fall 2012 edition), I picked up a small mound of tiny chapbooks produced by Pearl Pirie’s phafours, including Gwendolyn Guth’s Late Plate (2012), Pearl Pirie’s Sprockets Away (2012), Luminita Suse’s Avid Walls (2012), Gary Stark’s Self-Portrait (2012) and Louisa Howerow’s Voices, Choices (2012).

The works here are varied, producing small works you could fit in the palm of one hand, and Pirie’s own even introduces some of her visual/concrete works, which have the same playful flavour of her other works, expanding her ouvre into a variety of forms as she explores just where her writing might end up next.

and as you say—
it takes so little

as the speech of bygone women
disenfranchised by time

the wind whistles through
for courage (Gwendolyn Guth)

For some time, there are a number of people waiting on a first poetry collection by Ottawa poet Gwendolyn Guth, and her chapbooks over the years have been few and far between, including The Flash of Longing (Friday Circle, 2001) and Good People (above/ground press, 2010), so any poems by her are a good thing. This small chapbook exists nearly as a teaser to further work, and even reclaims a poem from that older chapbook. We can only hope for something further, longer, soon.

Beijing/Detroit MI: From the desk of derek beaulieu, came Saginaw no. 3, a journal featuring the work of Stephen Ratcliffe, Ariel Goldberg, J.D. Michell-Lumsden and Derek Beaulieu. Apart from beaulieu’s own visuals, some of which also appeared in ECONOMIES OF SCALE: rob mclennan interviews derek beaulieu on NO PRESS / derek beaulieu interviews rob mclennanon above/ground press. (above/ground press, 2012), some of the works that struck were Stephen Ratcliffe’s poems, “from Continuum,” that includes:

objects lined up on picture
plane, a wooden table

which goes by a single name,
once asked, “can one”

There is obviously a larger structure here, intrigued to see how far it goes, and how large. Just how vast might a Continuum be?