Other Things, If Not More Urgent Things

How to get close without going over.
How to feign lust for whatever’s on offer.
How the largest possible quantity
of anything is a lifetime. A lifetime
of oat bran. A lifetime of timing belts.
A lifetime of saying SURE, WHY NOT,
I’M ONLY ON EARTH X NUMBER
OF YEARS, and not knowing what
to make x. Sometimes I pick a number
I’ve already passed. I remember
the gambler’s credo—when you only
have fifty bucks left in this world,
you’d better get rid of it fast; the last
thing you want is money around,
reminding you every day of the money
you lost. The recommended
retirement plan is arabesque, then leap
and smash on the seawall. We made
a promise not to catch each other. 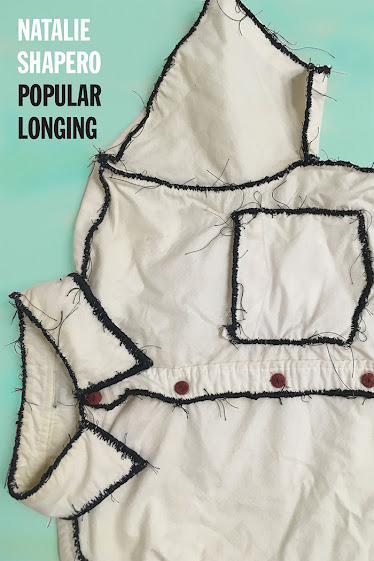 The third full-length collection by Somerville, Massachusetts poet Natalie Shapero, following No Object (Saturnalia, 2013) and the Griffin Poetry Prize (International) shortlisted Hard Child (Copper Canyon Press, 2017) [see my review of such here], is Popular Longing (Port Townsend WA: Copper Canyon Press, 2021), a collection of narrative lyrics composed through wry observation, sharp commentary and consequence, and the occasional rush of breath. Her poems are pearls of logic, urgency and contemplation, composed of worn irritation and deadpan delivery. The poem “Have at It,” for example, opens: “When you work here for ten years, you get / a blanket. The blanket has their name on it, / not yours. I am conducting an anecdotal / survey of longtime employees, and I have yet / to find one person who uses the thing / to keep warm.” The mind moves quick, but the poems unpack slowly, as though not wishing to overlook a single thing.

As she writes to open the poem “Tea,” referencing, of course, contemporary reenactments of the 1773 American “Boston Tea Party” protest against the British: “I can’t get away from it. / Felted-up reenactors shoving a great fake crate of it / into the Harbor and jeering. / After the tour group leaves, they fish it / back out and towel it off, / unbutton their waistcoats to smoke.” I’m fascinated by the ways Shapero takes an idea or a subject and dismantles it, studying every small piece through her evolution of sentences. The poem “Tomatoes Ten Ways,” for example, extends thought across a great distance, yet turning every moment over to see what lay beneath, writing: “I just want to get // back now, back to my kitchen, back / to my peeler and ladle and electric / oven where decades of hands // have worn the temperature marks / clean off the dial—it’s always a guess. // Cooking is important. It prepares us // for how to sustain each other / in the emptiness ahead.” Through attempting to seek answers to impossible questions, Shapero manages to uncover separate but equally important truths, ones that might have otherwise lay fallow.

I’m curious about the extended sequence “Don’t Spend It All in One Place.” Set two-thirds through the collection, the poem is a narrative thread of fourteen sonnets that opens with a conversation around those who attack visual art in art galleries or museums. Each section, while shaped into the requisite fourteen lines, seems composed without necessarily utilizing the rhythm of the line-break but for the sake of the visual, her narrative pushing across the lyric in a single breath, as though the line-breaks aren’t there, or aren’t required. The sequence is interesting, unpacking an idea at a slower, more considered and expanded pace, but I’m unclear why these poems appeared with line-breaks; as sonnets, instead of a sequence set in blocks of prose. Throughout the rest of the collection, the purposes of her line-breaks are clearer, existing as a blend of rhythmic, visual and to play with meaning. As the second poem in the extended sequence reads:

Attacks on artwork are common enough, but it’s not
as though every odd watercolor gets its own
day to be maimed. It’s more that specific paintings
enter into cycles of finding themselves slashed
and restored, punched through and restored, effaced
by aerosol and then restored. Once a painting
gets famous for having absorbed some disturbance,
everyone wants to have a go. It’s like the woods
where a few people killed themselves and then all
of a sudden all these tourists were planning
pilgrimages there to do the same. The woods
were in an area accessible only by ferry, and after
a while the agency that governed the ferry system
declared it a crime to purchase a one-way ticket.