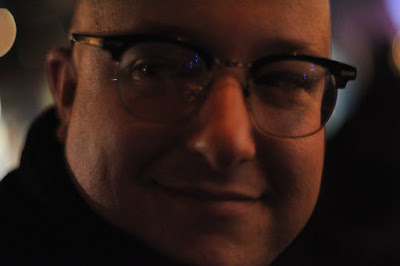 Andrew Farkas [photo credit: Jacob Knabb] is the author of a novel: The Big Red Herring (forthcoming from KERNPUNKT Press in October 2019), and two short fiction collections: Sunsphere (BlazeVOX [books]) and Self-Titled Debut (Subito Press). His work has appeared in The Iowa Review, North American Review, The Cincinnati Review, The Florida Review, Western Humanities Review, Denver Quarterly, and elsewhere. He has been thrice nominated for a Pushcart Prize, including one Special Mention in Pushcart Prize XXXV and one Notable Essay in Best American Essays 2013. He holds a Ph.D. from the University of Illinois at Chicago, an M.F.A. from the University of Alabama, an M.A. from the University of Tennessee, and a B.A. from Kent State University. He is a fiction editor for The Collagist and an Assistant Professor of English at Washburn University. He lives in Lawrence, Kansas.

My first book, Self-Titled Debut, was a real shock because I submitted it to one press and it got accepted. Sunsphere, my most recently published book, was also a shock because it took me about ten years to get published. Strangely, I was more or less writing both of them at the same time. So, Sunsphere and Self-Titled Debut feel similar to me because they're both short fiction collections that I wrote at about the same time. They're different because Sunsphere is specifically focused on concepts stemming from energy, entropy, the 1982 World's Fair, and the Sunsphere itself, while Self-Titled Debut does not have a specific focus, being all of the non-Sunsphere stories I wrote during that time period.

I didn't really become a reader until junior high. Before that, however, I would invent my own sports that I'd either play in my basement or outside. But I didn't just create the sports and play them. I also invented the players (who were oftentimes named for actual athletes), gave them their own personalities, and I acted as the play-by-play and color commentators. In other words, I was living out Robert Coover's The Universal Baseball Assoc., J. Henry Waugh, prop. without knowing it. I think that helped steer me toward fiction (and toward metafiction), since I was already creating storylines and characters who I'd comment on.

Normally, ideas come to me pretty easily. The toughest part of any project for me, though, is the beginning, when I'm sitting there with a blank screen. At that point, I normally write down, as you say, copious notes. At some point, however, I have to start pounding on the keyboard and just accept the fact that what I write is going to sound terrible at that stage. Then, with more notes, more keyboard bashing, more outlines, and then rewriting the bad early drafts, everything starts to come together. Consequently, I love the later stages, when I know what's going to go where, and all I have to do is work on making it sound right.

Of my three books, two of them were books from the beginning (Sunsphere and The Big Red Herring), one was not (Self-Titled Debut). However, I don't think collections of short stories or essays need to have a central focus. Although the stories in Sunsphere have some version of the Sunsphere in all of them but one, the styles and genres are very different. Even my novel has lots of different parts that technically connect, but are still very different from each other.

I read my writing out-loud a lot while I'm working on it. So, since I'm pretty much practicing for public readings the entire time I'm writing, I do enjoy giving readings. I've found it can be a little difficult to get readings in places where you don't live and don't know anyone, though.

Movies and TV shows are fantastic at dealing with the visible world; literature is fantastic at dealing with the invisible. What's important that's invisible? Our interior lives and concepts that just don't lend themselves to physical representation. Authors, then, can help us with our interior lives by showing us what we can't usually see, by helping us grapple with the unknown. Granted, people have to be willing to follow the author, which I figure is why you asked if the author has a role in larger culture. People are often afraid to deal with such ethereal problems. But since reality is so complex, when people need to broaden their mental horizons, authors are there to help.

I absolutely need feedback on my work to bring it to completion. I'm lucky to have met people in my life, like Louis Moyse, Carl Peterson, Travis Hessman, who have helped me immensely with various projects. They're the ones willing to tell me when something isn't working. That's the sort of thing I need to hear at times in order to progress forward.

Ignore all universal rules of writing as they are equally worthless – including this one.

I have written fiction (short stories and a novel), creative nonfiction, plays, and screenplays. I find my brain works differently depending on what I'm writing. For instance, in order to write good plays, I absolutely had to learn to hear my work in a different way. That which sounds great in a short story doesn't necessarily sound any good in a play. One of the things that helped me was staged readings. I walked into my first staged reading thinking, "This play is already done, why am I even here?" and walked out thinking, "Pretty much the whole play needs to be rewritten." After learning that lesson, I was always on the lookout for how I could use a specific genre, instead of thinking that one style was good enough.

I'm a night owl, and I find my best work gets done at night. When I first start a project, I can't write for very long, but I can pace a great deal (luckily, I've never lived above anyone). As the project gets going, though, I can work more and more. I even find myself drawn toward my desk, whereas early on I have to fool myself into sitting down and putting my hands on the keyboard (I'm just going to check my email, yeah, I'm not writing, just checking my email). The closest I get to a normal writing schedule is, like, maybe 8:00pm to midnight.

Old standup comedy routines, especially the ones by Steven Wright, often put my brain in the right gear. So do movie theaters (even if I see a bad or mediocre movie) and art museums. Walking through a big city, or riding a mass transit train at night can help a lot too.

Akron, Ohio claims to be the birthplace of the hamburger. So, hamburgers.

I'd like to write a film that gets produced. Even if it were short and extremely low budget/no budget.

I honestly think my options were writer and occupations connected to writing (like my teaching of writing), or nothing. If I wasn't in the general writing game, then, I'd likely be in the pizza delivery or mosquito control business.

I don't agree with Flannery O'Connor on much, but she said that the only reason to write is because you've found you're good at it. If I can say so without sounding too arrogant, that's why I kept at writing.

Patrick Parks' Tucumcari is an awesome book! As for the film, I'm strangely fascinated with Shawn Linden's Nobody (2007). I'm not sure it's great, but for some reason I keep re-watching it.