Somebody (I forget who, I think it was derek beaulieu) pointed out that I had done a book about books (Ex Machina) and a book about theatre (Clockfire) and a book that is in many ways about film (The Politics of Knives) and expected I would do a book about visual art next. I brushed the idea off but it stuck, and eventually I noticed that I have a number of poems that mimic techniques from visual art, the way that The Politics of Knives contains some pieces that mimic film techniques.

The National Gallery is framed with a deceptively simple question, as he writes to open his “Notes” at the end of the collection:

The National Gallery asks the question, ‘Why create art?’
Thousands of years of written history have produced few good answers to this question. To make matters worse, I have tried to complicate those few good answers. Each sequence of poems adopts a different approach, to complicate it in another way, considering the question both in terms of art’s function in the public sphere and its engagement within private realms.
I do not have any answers, just this art. 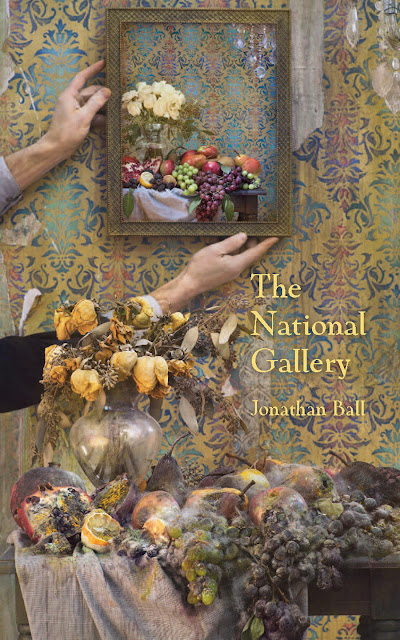 Set in nine sections of short poems—“Group of Seven,” “In the Room with the Light,” “Mixed Media,” “Food Court,” “Leatherface Retrospective,” “Gift Shop,” “iPhone Elegies,” “Selfies” and “Help Me Because I Never Learned To Hide”—the narratives of Ball’s pieces don’t twist expectation as much as they sidestep, composing poems that exist in counterpoint or opposition to what he has deliberately set up. The first section, “Group of Seven,” for example, is a section of twelve short poems, each titled with the name of one of the infamous “Group of Seven” painters, as well as a few of their contemporaries, such as Emily Carr (I’m admittedly disappointed that my personal favourite Canadian painter from that period, David Milne, hasn’t his own poem). Each of the dozen poems exist with their ‘namesake’ as red herring, smokescreen and sheen, suggesting an impossible kind of colouring to each of his carved lyrics. One presumes that the “Lawren S. Harris” poem—that opens: “I took my poems to the rain barrel / Where I drowned them one by one”—would shift had it a different title, say, “”Franklin Carmichael” or “Tom Thomson,” and yet, it might not matter in the slightest. The difference could be of perception, of how we see, and even expect to see, things. An incredibly coherent suite of poems, they challenge the notion of art from art, or art at all: what is the ekphrastic when the connections aren’t obvious? The Group of Seven painters are such classic “Canadiana” that much of the awareness of them and their work has been rendered iconic and stereotypical, even mute. What do we know of Lawren S. Harris? What knowledge of him and his work might we bring to this poem? As Ball offers as part of his “Notes”:

Each poem is titled after a member of the Group of Seven (including major affiliates, for a total of twelve poems). Since these artists have lost all sense of radicality due to their incorporation into the gallery system, these poems refuse to address their supposed subjects but instead mimic an aspect of their painterly approach by subverting conventional Canadian tropes in order to turn each poem against itself.

What is interesting, also, is his description of how the book came together, through the opening section: “Although many of these poems were written earlier, over the course of twenty years, this manuscript began to solidify when I started to write the poems in ‘Group of Seven,’ poems that take poetry itself, and how I relate to my poetry, and how the wider world relates to art, as their subject. These poems question the traditional purposes of poetry and address the various failures of art-making as a whole.” The foundation of the first section holds the manuscript together, certainly, opening up for a variety of ekphractic explorations around art, film and poetry, pop culture and Canadiana, and one’s place in the world of writing, all running along the thread of that central question:

Poetry warlords are the worst, but I’m the best.
I rap-battled my way off Canadian Idol.
I put the sonnet form to quite the test.
I alluded to the entire Bible.

Poetry warlords sun themselves on beaches nude
Like Adam Beach will one day pose in Playgirl.
They question where the car hath gone to, dude.
They eschew question marks to seem more stable.

Once I couldn’t get published in Grain,
Then I published in every issue of Grain.
Here the heads of former editors I’ve slain.

Ball is a poet that revels in odd humour and odd juxtapositions, striking out in unusual directions that keep going, further than you might have imagined. There are elements of Ball’s poems reminiscent of the work of Canadian poet Stuart Ross, but Ball’s lyrics, in comparison, are more restrained, less outlandish; focusing instead on a wry, observational humour than a sparkling pessimism. Further into his Touch the Donkey interview, he wrote:

I love writing a poem that works as a poem and stands alone but also has an interesting and complicated relationship to somebody else’s artwork. It’s a way to inspire yourself and to create and also be analytical and critical in a sense. I have always been ambitious, and it is also a way to associate yourself with your artistic heroes.

Christian Bök once told me something along the lines that if you open your book with a quote by Kafka, now you are in competition with Kafka. You have to be more Kafkaesque than Kafka. I like the challenge of that concept. When I wrote my poem “K. Enters the Castle” in The Politics of Knives, I was very much thinking in those terms. How can I take what Kafka was doing and extend it beyond Kafka? What would Kafka write if he had watched Tarkovsky’s films, like I had?

While the collection might not aim to specifically answer the question of why one makes art (my own preference leans towards those projects that work to ask questions over the presumption of actually having all or any of the answers), the fact of the finished and published book certainly answers, at least for now, that Ball himself can see a value in the production of art. His answer, despite claiming to not actually have one, is the fact of and the poems within The National Gallery. As well, given his work through short narrative forms, I am curious to see his debut collection of “stranger fiction” out next fall, The Lightning of Possible Storms (2020). I suspect it will be well worth the wait.