I Could Have Pretended To Be Better Than You: New & Selected Poems by Jay MillAr


Lyn Hejinian says writing is an aid to memory, and I can’t help but see a world around each poem that no one reader could possibly know. For instance, the basement apartment Hazel and I rented on Northumberland Street, or thoughts that bubbled up while I was hiding out in the stacks of the Scott Library at York University, or poems I continue to associate with the blue Norco bicycle I rode everywhere in the 1990s. Even a poem written while sitting in the back seat of a car as we drove north with friends to go camping at Arrowhead Provincial Park has shadows that are important, but more to me than anyone else. I mean, there is the poem for all to see in their own way, but to have an opportunity to revisit moments from my past that would have been completely forgotten without the poem is truly a gift. Hence the cliché of surprise. Surprise! Tim has done his homework – some of the poems in this volume were published in editions of as few as ten copies. even I – the author of these poems – had forgotten about some of them until now, and until working on this volume with Tim I had a habit of imagining my oeuvre as only a handful of poems, self-categorized greatest hits. Very few of those poems are actually in this collection. (Jay MillAr, “Author’s Preface”)

It is a strange thing to see poets of my generation (especially those slightly younger than I) begin to release volumes of selected poems (Derek Beaulieu had one a while back, for example, as has Rachel Zolf), and the latest I’ve seen is I Could Have Pretended To Be Better Than You: New & Selected Poems by Jay MillAr, edited and with an afterword by Tim Conley (Vancouver BC: Anvil Press, 2019). Given I had attempted an essay on MillAr’s work some time ago [see it here at seventeens seconds: a journal of poetry and poetics], I was curious to see editor Tim Conley’s selections, as well as his framing for Jay’s work as a whole. Given the extensive publishing and self-publishing MillAr was involved with throughout his twenties (his Boondoggle Books, which morphed into BookThug and eventually Book*hug, is roughly the same age as my above/ground press), it is fascinating to see the wealth of early material collected here, as Conley himself suggests that the book isn’t meant to be built as a “greatest hits,” but “as a cross-section of an oeuvre still growing.” The nearly two hundred pages of I Could Have Pretended To Be Better Than You is broken up into three distinct sections—“Part One: The Years of Stitches and Staples (1992-1999),” “Part Two: Seriously Taken (2000-2014)” and “Part Three: New Poems (2014-18).” Editor Conley offers that:

[…] MillAr’s poetry is a kind of sustained consciousness of how movement an inertia are simultaneously experienced, the one an illusion of the other.
Time, one of his most habitual themes, is what underwrites this consciousness. When his poems give dates, they are often jokes, and even when not they are receding, not specifically coming into view. In all of his poems the forward momentum neither abates nor pretends that it could.

Given Conley’s argument that MillAr’s work is engaged with time, the structure of the book—through different time periods of his work—is a curiosity. As Conley writes, further in his “Afterword”:

While his poems are everywhere explorations of demotic language, MillAr is less interested in representing speech than in representing thought processes, how our minds shuffle, leap, or tumble through the passing of time. This is not to say that the poems aren’t ready to be read aloud: that’s part of the play, a sense of play that invites the reader to play, too. MillAr is suspicious, to say the least, of wit that is not part of a shared conversation, and any persona he adopts comes with its own self-deflation mechanism. 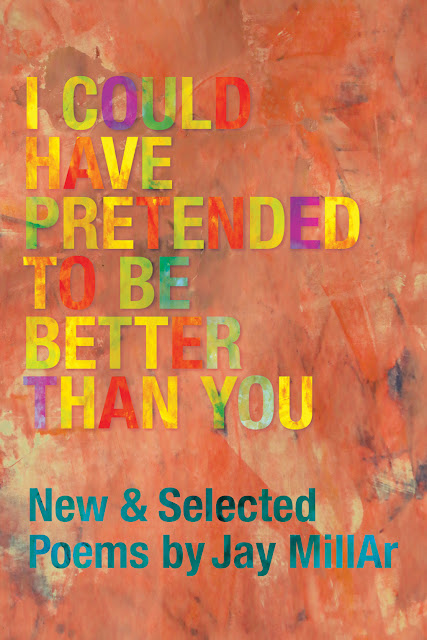 This volume does provide a fascinating overview of MillAr’s work, one that has long worked diligently to explore form and structure, willing to move out entirely across his reading interest, through whatever might have moved across his attention at any particular moment. While Conley might suggest that all of MillAr’s work is engaged with time, the immediacy of his explorations in form suggest he is also, concurrently, a writer very much engaged in the moment he is currently in, over, say, a writer of books, seeking to look too far ahead; MillAr, through this selection, is shown as a composer of individual poems and sequences over that of a poet such as Stephen Cain or George Bowering, for example, utilizing the poem as a means in which to compose book-length projects.

Strange unpronounceable red outside
of the birds (Erik Satie was of
the birds, knew the plenitude of
clouds) wakes with a mysterious roar

the sun shoots out rays of red, orange,
blue &gold, & we are told our size,
somewhat larger than a squirrel
far less interesting than our own train

just to wake us, just to make us small, “we
lay at the bottom of a strange ocean, in bed
where the trees were pure sexual beings, swaying
in our heads & your breath was the smell

and Satie was the sound of the sky, slow
moving, promising whatever came to mind”

What becomes interesting through the process of this collection is in seeing a poet who not only refuses to be a fixed point—as soon as an image of what kind of poet Jay MillAr is begins to take shape, it immediately shifts—but his seeming complete lack of interest in such an approach. His is a poetics that is constantly moving, shifting and taking in new information, influences and approaches. One could even say this approach is also what fuels his publishing, refusing the fixed, unchanging point, one that aims for exploration as well as excellence, and one that is constantly reaching towards the immediate moment, before turning towards whatever comes next.