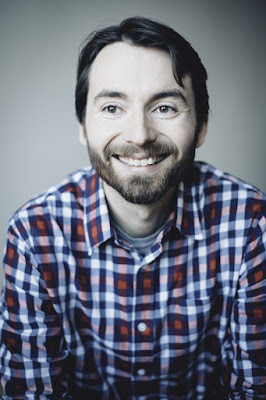 Matthew Gwathmey was born in Richmond, Virginia and studied creative writing at the University of Virginia. He became a Canadian citizen in 2013 and lives with his wife and children in Fredericton, New Brunswick, where he is a PhD student at UNB.

My first book just came out, so my life is in its germination stage of change. I don’t expect that it will change all that much, except that I am becoming more connected to other poets through the avenues of social media, readings, memberships, and other in-roads. I will admit, it does feel good to hold something in your hands, and for the first time in my life, I’m actually content with where these poems are in their current states. I hope this feeling lasts a while, before I can’t bear to look at them again.

When I figured out that my first name could be found in my last name (gWATHMEy), I began a lifelong obsession with words and wordplay. Naturally, this led to poetry, particularly after discovering e e cummings. It was round about early high school when I first started writing my own poems.

I’m a slow starter and a slow processor. Heavy revision and endless tinkering are definitely parts of the procedure. First drafts look nothing like final products, though once I worked on a poem that started out as a prose poem, then became rhyming couplets, then a sonnet, then unrhymed hexameter, then back to a prose poem. So maybe the lesson here is I should go with more first drafts…

A poem for me begins with a snippet of something, usually an image. I’m definitely a collector and arranger, definitely without some overall scheme or concept.

Though I haven’t had much of an opportunity to participate in that many public readings, I would say that I am the sort of writer who enjoys doing readings. Poetry’s meant to be read out loud, even the avant-garde stuff, so a venue for that sort of encounter is a must.

I’m interested in form, the lyric, meaning, image, metaphor, reference points, and affect, though I don’t think these are really theoretical concerns. And they’re not a list that I check off for each poem I write either. At least I hope not…

A couple one-word questions that I try to answer, and are definitely two of the current issues:
Environment?
Technology?

Unfortunately, it’s hard not to be a little discouraged given the current landscape, the writer making a small splash in the background ocean that no one sees. In all seriousness though, poetry is out there, in public, making itself known, rather than just living in the comforts of academia and presses. The role/challenge is to get out more.

I’ve taken quite a few workshops over the years, so I would definitely be in the camp that sings the praises of the importance of editing from the outside. But I guess that’s not exactly the same as an outside editor. For this book, I had two editors, Nick Thran and Alayna Munce, and I feel that I definitely lucked out, because these two were incredible. The process of working with an outside editor must be difficult and is essential. Difficult in that there’s always work to do. Essential in that it’s necessary work.

“There are only two types of luggage: carry-on and lost.” (Charles Wright)

For inspiration, I turn to the poets around me. Fredericton has moved past Poet’s Corner to become a veritable Poet’s Hub. We have the profs like Sue Sinclair; the established gurus like Ian LeTourneau; the young guns like Emily Skov-Nielsen; our presiding spirit: M. Travis Lane; fellow PhD’ers like Rebecca X. Salazar. Plus, there’s a whole swath of up-and-comers, not to mention all the brilliance that has come through here. I’d venture to say that Fredericton has more poets per capita than anywhere else in Canada. So yeah, you don’t have to go far for some inspiration, or at least a good conversation about poetry.

We recently had some very impressive pine trees cut down in our front yard, so we now have all this sawdust in our front yard, and our dog Luna likes to roll around in it like a giant hamster, and bring whatever’s attached to her fur back inside. So right now, the smell of sawdust reminds me of home.

I’ll take influences anywhere and everywhere I can. The back copy of OLiF is very generous, and it lists a lot of influences/references: comic books, Radiohead, Madness and Civilization, coding, Evangeline, A Tale of Acadie, Pavement. I just realized that three out of the six here are of the written form… Other forms? Other forms? Architecture for sure.

Write a poem about my grandmother’s tragic death. She was hit by a tree while driving her car home from church. The trees hug the byways in Virginia, but you still have to wonder about the chances. Anyway, a fairly local poet of some renown wrote a poem about it. Everyone loved it, the poem. Of course I always felt it was too detached from the person she was. So my goal’s to write a better one. Haven’t yet.

In a former life, I was a high school English and mythology teacher. This job was great for close reading and discussion, as I got to teach some major works. It was not, however, great for writing, as time seemed to disappear. Which is why I eventually made my way back to the university, I guess. In a former life before that, I was a jazz drummer.

I keep coming back to thoughts around writing and having kids. I’m not saying that books are like children, though they are in a way. I finally kicked that teenager out of my house. No, if we imagine a silent room without distraction and a few quiet hours as essential to writing, then kids are the antithesis of what’s needed in creating a conducive atmosphere. So I’m wondering how kids help writing, for I would say that they make me write, in a way. Certainly not for the money, or to put food in their stomachs, as if that were the case, we would all starve. But there’s a sense of urgency present, a sense of forming or modelling, that’s compounded with a sense of mortality and perspective given by the simple fact that Lily and I have two “sick” kids. A lot of senses mixing around here for sure! Well-being makes me write.

Last great film: My movie-viewing these days is reduced to animated fare (not that I’m necessarily complaining), as they have to be kid-friendly. I’m going to go with Isle of Dogs.

I’m working on a novel called The Fictional Autobiography of a Day’s Inane Thoughts. The five-second summary: The FADIT starts with the knowledge that the narrator tried to kill himself near the end of his last day of high school. The story works its way through that day up to the attempt and is broken into sessions between the narrator and his therapist. I’m also working on a musical about a family with a sick kid. Very light, upbeat stuff, perfect for Broadway. And yes, slowly, very slowly, plodding along on a second poetry collection. Be on the look out for it in 2035!

Posted by rob mclennan at 8:31 AM
Labels: 12 or 20 questions, Brick Books, Matthew Gwathmey