Lea Graham, From the Hotel Vernon


Sentences for the Baker

In jail, they say, he learned tactics of a tiny man, slept in his own shit, foiled the sodomizers & years before demoted from baker to mopper among rumors of incest, illiteracy—the twelve-year old chicken-plucker of Water Street known to feed the Vernon mice, those tiny sailors, saltines & nips at noon. Once, on a Friday night, two spangled Holy Cross girls plunged their hands into that bearded nest, danced him beneath Joe Miron’s muraled sailors & seas, the Mariner’s albatross still in flight, circa 1940.

He said: some thing was sprouting in his neck.
He said: I don’t come down here for the beer, you know.
He said: It’s lonely all day alone up there.

American poet Lea Graham, originally from Arkansas but now living, teaching and writing in New York State, finally follows her debut collection Hough & Helix & Where & Here & You, You, You (No Tell Books, 2011) [see my review of such here] with From the Hotel Vernon (Co. Clare, Ireland: Salmon Poetry, 2019). As the back cover offers: “The poems in this book grow out and around the Hotel Vernon, built at the turn of the 20th century in Worcester, Massachusetts. Once an elegant place for local politicians to make their backdoor deals at the edge of the city, it slowly fell into decline each decade following Prohibition.” From the Hotel Vernon focuses on the central point of the real hotel and echoes of history, composing a collection of poems that gives a sense of being a series of sketches or small studies populated by tourists, poets, ghosts, an array of local characters, Keno and historical figures (for the sake of full disclosure, there is even a poem included here dedicated to me, and on/around her reading of my poetry collection paper hotel). 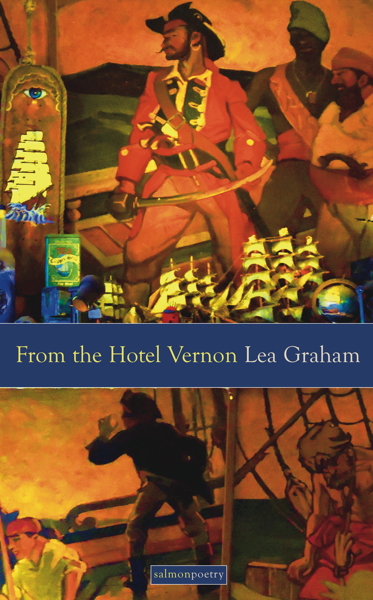 Graham the poet has approached the real Hotel Vernon as pilgrimage and personal study, occupying both real and imaginary spaces, somewhere between the articulation of voice of some of Ottawa poet Stephen Brockwell’s poems (in which he records the storytelling and speech of specific people to shape into poems) to the mythologies wrapped around Michael Redhill’s Lake Nora Arms (Toronto ON: Coach House Books, 1993) [see my note on such here]. Graham’s poems don’t miss much, and her studies invoke both mythology and study, whether writing out or invoking cab drivers, Roy Orbison, drunks at the bar, Bakery Joe, Frank O’Hara, Al Capp and multiple others, as she writes:

I’m writing this from the Hotel Vernon where Louis just slid me a note on a Keno card—Fats is Saved! reads the scribbled news flash across ovals & numbers. The boys sit out back between dumpster & 290, grilling dogs, singing “The Night the Lights Went Out in Georgia” & “Gentle on My Mind.” They call Roy Orbison, “that kid,” as in that kid can sure sing or that kid really had something. If the bedbugs weren’t so frequent & the hound-eyed man down the hall didn’t shit in the shower every Thursday, this could be home. Some nights, Al & I sit on the roof, watch the square blink on & off, memories in motion.

Once in Paris near the St. Michel station, I was homeless after missing the last train to Saint-Cloud & losing my shoes. The French the hotelier spoke—even poorer than mind—still managed to send me through the accordion gates & up a hall which couldn’t avoid The Shining in my mind: isolate parallelograms beckoning red with no red in sight. I was sleepless to a dubbed Law & Order SVU, three showers. Compelled to rise each hour on the hour, detecting a figure across the courtyard at a window. How did she know to push the curtain back a bit, to shift in that way? Why was she searching this Parisian dark? How did I wake precisely to see her each time? Six a.m. appeared. I saw myself, a mirrored window. Like Arbus twins, one-armed & lazy-eyed. That ambiguity of lips. Wherever you go, there you are. (“Notes from the Hotel Vernon”)

In an undated interview conducted by Caroline Bernier and posted at Poor Yorick when the collection was still in manuscript form, she spoke of her connection to Worcester, Massachusetts, and specifically to the Hotel Vernon:

PY: What is your connection to the city of Worcester, Massachusetts?

I moved to Worcester from Chicago in 2000, following a former spouse who had just gotten a job there. I lived there for seven years, teaching in various colleges and universities, most notably Clark University.

I didn’t really like Worcester for most of the time I lived there. I found it gritty and hard to break into socially. It wasn’t until the very end when I worked at the Hotel Vernon that I began to have a greater understanding of the city. This was largely due to a sense of community that existed there and also my learning its history through long-time residents. People would come in and tell me all kinds of stories about the city and its neighborhoods. Its name actually means “city of work”—and it is a place that so many people came to work and still do. From my own work experience bartending at the Hotel Vernon, I began to really see the city for the first time through the prism of pride that people who really knew it had.

I think that having such a changed perspective about Worcester because of the personal-historical connection taught me a lot about place and how any place can be a good place to be—depending on what and who you know and your openness to it and them. I stopped being snobby about places and was able to move beyond the cliché of “here is hip/sophisticated/interesting versus there is only poor/dirty/dull.”