Cassie Donish, The Year of the Femme


This seems to be the pattern
Going outside is part of the pattern too
Each day there are fewer leaves on the trees
Each day there are more leaves in the street
Time is a puzzle with interlocking parts
Interlocking parts are meant to be unlocked
Each bit of metal has its own form
Although people are similar to each other
Each person is having a distinct experience
She is wearing a necklace of amber
Amber is the color of the day
It is the color of being a woman
At night she removes it (“Portrait of a Woman, Mid-Fall”)

I’d heard some excitement around the publication of American poet Cassie Donish’s second full-length poetry title, The Year of the Femme (University of Iowa Press, 2019), winner of the 2018 Iowa Poetry Prize (as judged by Brenda Shaughnessy) and a follow-up to their debut, Beautyberry (Slope Editions, 2018).  Set in five sections that alternate between those comprised of a single, extended sequence and those built out of shorter, self-contained pieces—“Portrait of a Woman, Mid-Fall,” “One Fluent Green Blaze,” “Heat Waves,” “A Gale” and “The Year of the Femme”—Donish’s The Year of the Femme is constructed as a suite of sharp and self-aware meditative lyrics that explore identity, belonging, pain, sexuality and gender. “At the edge of a field a thought waits,” they write, in the opening suite/section “Portrait of a Woman, Mid-Fall,” continuing: “Putting it this way gives agency to the thought / It’s important to her that it can be said this way [.]” Donish writes openly of loss, such as the sequence/section “Heat Waves,” writing of a friend who’s “Boat capsized, the body / Not found,” writing of the heart-rending open-endedness of six days later, “His body still / Exists somewhere / Beneath the blue / Corruption, a storage / Of stars [.]”

Someone said a journey starts with voice. I grew up swimming in a slow-moving river, in words like sister and girls. I knew a waist was supposed to be soft, knew when it should be covered, when revealed. Now I move through terminals, other places move through me, other words. I follow a sign, I refuse to neaten the disorder. Each object is assigned a role, a gender. Eye shadow. Boxers. Musk. Bruise.

In a new body / My star anise

My amber, powder / His eyes I painted

Touched his waist / Felt a pulse 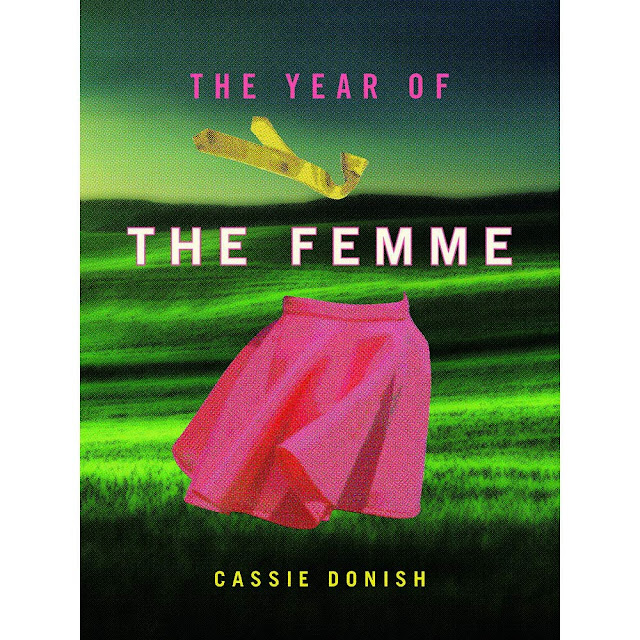 Donish's poems are quite remarkable, stretching out the body of a long thought, writing a poetry book as much a singular, book-length consideration as an assemblage of individual poems. In “A Conversation with Cassie Donish,” conducted by Andy Stallings for THERMOS (posted February 13, 2014), Donish responds:

I think maybe sequences suit my temperament. If you’ve ever walked around with me all day, or for a week, which you have, you know I like it when conversations have many threads, and the threads can be interrupted by events (like swimming in a river, or buying ice cream) but then returned to suddenly in a single breath, without syntactic regard for the hours or days that have passed; for instance, resuming a prior conversation with gestures like “But what about…?” or “And anyway…” Maybe poets are like this in general, maybe people are? I think the sequence is a form that suits this mental state; it turns out that a single breath can be hours or weeks or years long. Who wants finality and complete thoughts? I love coffee, but my coffee often gets cold over and over, and I have to warm it up again. It becomes almost a game: how many times can I genuinely forget it’s sitting there, this thing I do want? Maybe I don’t like for the cup of coffee to end.

This collection does very much feel like a journey, one both difficult and incredibly rewarding, enlightening and fraught with peril, moving through memory, childhood and how those experiences impact the people we become (and wish to become), such as the final quarter of the poem “The Year Before or After / A Vulnerable Look,” that reads:

[…] Say memory is a colony
of various residues—the smell of oranges
in summer, a line of a song,
someone’s hand on my ass in a room
in winter, the voices of my parents,
my fear of the news, a photo of apple roses
baked by a man who could be
my father. The wish for fathers, a clover-shaped
window, its chamber of clover-shaped light.