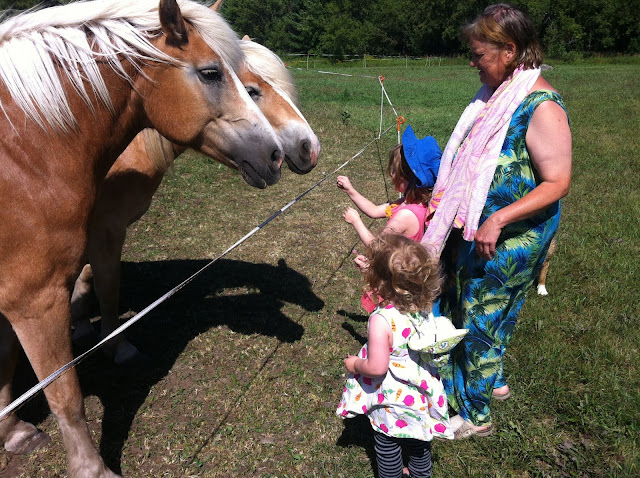 Where has it all gone? I feel like summer barely began.

Here's what the young ladies looked like a week-plus ago, with Clare Latremouille's horses.

Northampton MA: Zoe Tuck was good enough to send along a copy of her recent chapbook Soft Investigations (Daily Mayhem Books, 2019), a small collection made up of the prose/essay-poem “[Typical Trans Kenkyusha Sortes]” (a piece that won the Stacy Doris Prize and first appeared in Fourteen Hills: The SFSU Review), the extended/fragmented lyric “Fly into a page,” and the lyric accumulation “Friday 19 April 2019.” The first piece really struck my attention for how she manages to weave together references to Community, Robert Duncan, Berkeley Breathed, Roland Barthes and Italo Calvino’s Invisible Cities, among others, in a way that plays with multiple directions, odd connections and the direct line of thought. As she writes:

I don’t want to be lonely, even in my poems—especially in my poems, so I started to fill them with quotes from other artists. Didn’t you know that was coming next? Like when Troy in “Community” says that he gets lonely in the shower. That’s when I listen to podcasts about the death of the author or dance in translation and I struggle to make out the tinny sound of my phones speaker over the whirr of the ventilation fan while I lather my armpits with peppermint soap.

The other day I decided that I would hold up Roland Barthes as my model because he’s smart and he writes purdy. And who hates Roland Barthes? Aside from that New Yorker reviewer with the bee in his bonnet (you have read 1 of 4 free articles for this month).

2 and a half years of grad school and I still don’t want to be a man and something vague about phenomenology.

San Francisco CA: I only discovered recently that Canadian poet Lisa Robertson had a chapbook out with American publisher Krupskaya, her Starlings (2017). Starlings is a suite of poems that is “one part of wide rime,” a project that, as her author biography writes, “is her ongoing lyric study of troubadour poetics.” Did I mention that the thirty-page chapbook is also available online through their website as a free pdf download?

Yesterday I cried. It was artless and good.

Spring has its own agony, truly

For the nudity of one kiss

How tiring it is to disagree with everything!

Then we go visiting, throw our tender runners

Starlings. We are breaking into a vast derelict space.

We are the Starling scene in Sterne’s Sentimental Journey.

A caged Starling is repeating in the voice of a Child “I cannot get out.”

I’m fascinated by Roberston’s exploration into some of the origins of contemporary lyric through the tradition of the troubadour, something that easily links to her earlier work on the pastoral, but one that isn’t always explored by those engaged with more experimental types of writing.

some were at the edge of language to

couldn’t live. Some were at the core of

language so couldn’t live either. What if

we forget about language, move into

the natural history of the idea

of guts? Guts or rosewater, very

by means of rosewater. To make a natural history

San Francisco/Santa Barbara CA: The first I’ve seen by Santa Barbara poet, editor and country singer Julian Talamantez Brolaski is the chapbook JULIAN (Krupskaya, 2017), clearly missing out on numerous full-length titles, including gowanus atropolis (Ugly Duckling Presse, 2011), Advice for Lovers (2012) and Of Mongrelitude (Wave Books, 2017). There is some thoughtful play in the language of Brolanski’s poems, composing direct statements that shift, switch, bait and twist, including the poem “butterflies are stupid,” the title of which caught my attention immediately:

a butterfly is an example of an idiotic image
not one to idolatrize
they are former worms I guess, not-worms
I was telling nick yesterday about the dangers of idolatry
I gave the example of a butterly like
oh I saw a butterfly you saw a butterfly isnt it magical like
making fun of myself
then I gave another example to holi over coffee at the good earth
he “often” talks about tattoos people shouldn’t get
especially if they don’t have any tattoos yet
I said yeah like a butterfly on your neck
he said oh weird you say so the lyft driver I had yesterday had a butterfly
tattooed on his neck, here, he indicated the throte
and no other tattoos at all at all
then for some reason I was moved to tell you my own
story about the butterfly landing on me
again and again while I was in a patch of sun and outlifted my limbs
I compared it to the rat-dove and its wing
that literally swept over me touched my head touched my hair
like beaudelaire’s wind of the wing of madness
the word he uses is ‘I’imbécilité’  it turns out
the wind of the wing of imbecility or idiocy
but a butterfly is an example of a thing not to idolatrize