Metta Sáma, Swing at your own risk

After a handful of chapbooks through presses such as Portable Press @ Yo-Yo Labs, Miel, Nous-zōt Press and YesYes Books, North Carolina poet Metta Sáma’s second full-length collection (and first full-length collection under her chosen name) is Swing at your own risk (Kelsey Street Press, 2019). Swing at your own risk presents a lively and sensual erotics, a social outcry, and an evocative rage against a history of violence, racism and misogyny, from the general to the specific, as the poem “Silence: A retreat a meditation” references, among others, Trayvon Martin, writing: “A few nights ago, I felt the same pull I felt the day I turned on a television, years ago, and watched the beginning of a nation sinking into something called terrorism.” As editor “AF” writes in an introductory post to the poem’s publication at Literary Hub on August 5, 2015:

Poetry’s ultimate relationship to effective social activism remains a contentious and uncertain matter. Even so, as a reader and soul living in America today, I find great solace and provocation in the radicalized consciousness of black artists, in particular black contemporary poets, who continue, with immense and unnecessary sacrifice, to be at the crucible of our country’s dysfunctional conscience. What to say then, simply, about the epic outcry that is Metta Sáma’s new poem? First, its liturgical repetition of “Selah” beautifully invokes the Psalms, a choice which further invokes the tremendously rich tradition of black art, protest and history. Second, as a word of Hebrew origin, the exact meaning of “Selah” is not fully known; it has been understood alternatively as the noun “rock” or the verb “to hang,” in the sense of measuring or weighing something through scales (presumably). The use of such lexical ambiguity here is eerie, palpable, profound. Sáma’s poetic lamentation once more links experimental poetry to, in the chilling words of Fred Moten, the ‘experiment’ that is black life in this country. Here’s hoping, God help us, that we listen. 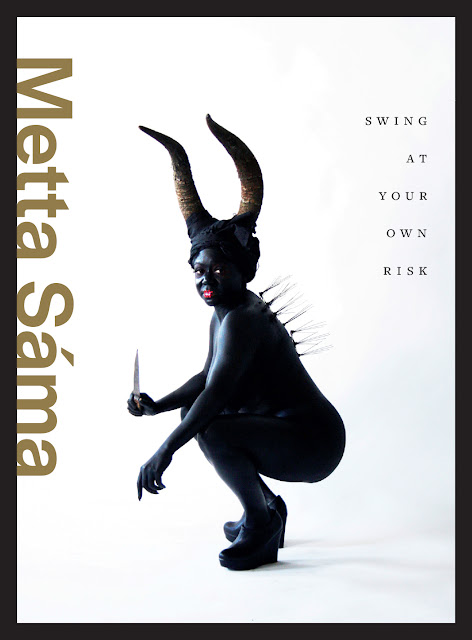 Sáma’s poems write and writhe on the Bible, Nora Zeale Hurston, Pablo Neruda and histories of American slavery, exploring a variety of stories of slaves and slave owners, presenting as much of a thesis and exploration of cultural history as a collection of poems. As she writes as part of her recent interview over at poetry mini interviews: “I’ve never thought, for example, that there are subjects that don’t belong inside of a poem, nor have I ever thought a poem cannot have movement, cannot have shape, cannot have a sonic landscape that is larger than the flat page. Nor have I ever thought that a poem needs to have a consistent “narrator” or single voice or that certain subjects cannot be broached in certain formal structures. There have been poets who have worked with structures, using basic computer skills, for example, to help their poems do the work their poems intend to do, such as Douglas Kearney and a former student, Morgan Christie. And poets such as Maria Damon who have embedded poems into textiles and Anne Carson who has reimagined what a book of poems can do. They have each shown me that the worlds I imagine are possible, as long as I have the skills to pull off the work.” There is risk here, presented in incredible ways, from elements of poetic structure to the very nature of her content, moving in multiple directions articulating elements of gender, sexuality, religion, culture, racism and misogygy throughout American history, all of which led to the moment from which she lives and writes; all of which makes for an unyielding, powerful and incredibly relevant collection of poems, as Sáma explores a history far too relevant to the contemporary, and a contemporary that demands not only attention, but action.

Although one Negro dies killing an Indian for a white man Although this Negro curves his back like a river passing through town Although Negro’s (freed?) hands were straightened, and trained on saving his master’s life (one Thomas Cresap frontiersman) Although the grade a bit steep (read: Higher Point in the state Read: frost heave) There’s the gentler, {white} traveler There are Indians & a negro A Negro Indians & Cresap Land was still tough to tame: Crows Black-crowned night herons Red-throated loons Over Negro Mountain: bald eagles, ruddy turnstones, laughing gulls Cresap Indians &

Legend tell us
he had a premonition
a death