I spoke of the cock sorrel stem

at night when you lit them
the tips would glow
like a little circle
in the dark and the smoke
was hot and harsh
and burned your throat (“3,” Ranch Days (for Ed Dorn))

Ottawa-area poet Robert Hogg hasn’t been terribly active, it would seem, for some time (above/ground press released a chapbook in 2012, and then an updated version in 2016), but this year saw not one but two different chapbook excerpts of his work-in-progress, “The Cariboo Poems”: Ranch Days (for Ed Dorn) (Ottawa ON: battleaxe press, 2019), which includes a foreword by Lionel Kearns, and Ranch Days – The McIntosh (Kemptville ON: hawkweed press, 2019), which includes a foreword by Bruce Whiteman. One of the later editors of the infamous TISH magazine, Hogg is the author of five full-length poetry collections—The Connexions (Berkeley CA: Oyez Press, 1966), Standing Back (Toronto ON: Coach House Press, 1972), Of Light (Coach House Press, 1978), Heat Lightning (Windsor ON: Black Moss Press, 1986), There Is No Falling (Toronto: ECW Press, 1993)—as well as editor of An English Canadian Poetics: The Confederation Poets – Vol. 1. (Vancouver BC: Talonbooks, 2009), so one might understand why, after nearly three decades of what felt like near-silence (a period that included his retirement from teaching at Carleton University to become a full-time organic farmer), the appearance of new material might be considered rather exciting. Even further to this is the acknowledgement in his author biography that he “is working on four collections: Lamentations; The Cariboo Poems; American Postcards; and The Vancouver Work.”

From its opening line, Ranch Days pulls us immediately into its story and does not let us go. Perhaps that puma is real, perhaps not. Even the poet seems unsure, remembering his experience as a ten-year-old boy. But we are compelled to read on by the power of story and the authority of the storyteller’s voice. Technically, the poem constitutes almost an apotheosis of enjambment. It constantly pulls you ‘round the corner of the next bit of narrative or the next bit of time, as a well-told story ought to. Lacking punctuation and capitalization, we always nevertheless know where we are, and where we are is from beginning to end in the hands of the voice, if that is not too odd a way to put it. It carries us forward, “swinging,” “hanging,” “tumbling” from the beginning to the restful end of the day, when the tired horses gratefully receive their water and oats.

The tang of the real in this poem is extraordinary. It is partly the sharpness of Hogg’s memory and the precision which ranching jobs require. The specificity of the vocabulary also adds to the sense of authenticity; window, sloop, snaffle, shock. (I worked on a farm one summer as a kid, and remember what we called “stoking,” i.e. standing the fresh-cut hay to let it dry out before it was baled). Cutting and gathering that wild “reed grass” which Hogg tells us about has parallels all over the world and all through the ages, going back to the very beginnings of agriculture; but the poet puts us unarguably in the Carbioo region of central B.C. and in the early 1950s, where a lake near Spooky Springs is as “round/as a plum” and a boy skids a sloop over the stubble as part of his job. The cougar may be a figment of a feverish imagination, rousted from the poet’s boyish brain by “long days in the hay”. Everything else is tangible and clear and unforgettable. (“Foreword,” Bruce Whiteman) 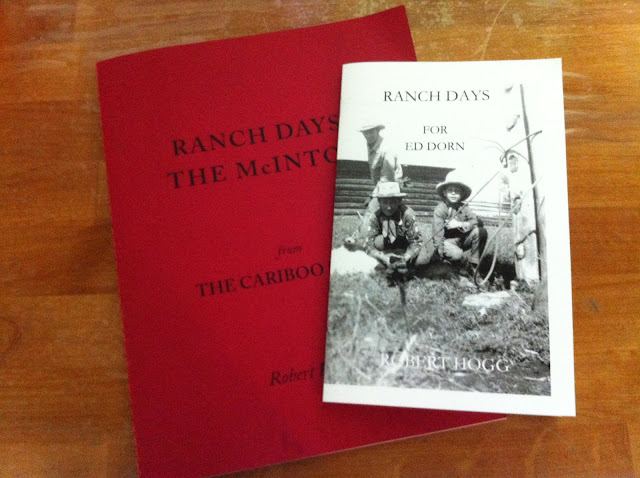 These two self-contained sequences are poems originally composed during the 1960s, poems already looking back at a period of time quickly slipping away, and recently revisited, reworked and restructured. There is almost a sense of layering, memory upon memory, as Hogg not only revisits his youth in the interior of British Columbia, but those early days of writing and engaging with poets and poetry in the 1960s. As Kearns writes: “However, the poem is more than a memory of a memory. It has come to us through the years to deliver a vivid encounter with a piece of personal experience. Heed those images. Take in the smoke from the tree moss in the boy’s pipe and the Bull Durham tobacco in the old rancher’s cigarette as it mixes with the smell of the unfortunate calf’s burning hair and flesh. No ideas but in things wrote William Carlos Williams, laying down the principle for conjuring up the essence of experience in a poem.” As Hogg himself writes as part of the “Afterword” to Ranch Days (for Ed Dorn):

This poem, originally called simply Ranch Days, was the first of a series of poems I began writing in early 1962 after hearing Ed Dorn read his poetry to a large audience at UBC when I was in my second year. Dorn’s attention to his rugged upbringing in rural Illinois and his more recent experience of the open landscapes of Idaho and Montana spoke so strongly to me that I felt an uncontrollable urge to respond with a poem which would capture my own childhood experience on the ranch where I lived, briefly, in the Cariboo from 1951-1953. I went home after the reading and wrote Ranch Days in the course of a couple of hours. It was my first attempt at writing about my ranch life which by now was a full nine years before. Only a few months later I would learn from the Vancouver Sun that our ranch house had burned down, killing an infant and sending two children on an arduous three mile trek to safety. I responded to that event with a poem called The Ashes of Two Fires.

What is compelling is in how Hogg writes both poems as a curious combination of meditation, action and description, composing a deceptively-straight line across a series of actions and movement, looking back at his looking back, and managing something unsentimental and contemporary through the process. There is something really compelling in the light touch of Hogg’s lyric, as he ends the chapbook/poem Ranch Days – The McIntosh:

Thanks for this Rob. A treat to anticipate new work from Bob Hogg! Loved his L'anse aux meadows from early 70's. Such a straightforward attention and voice. Never knew he was a BC boy!