say rhyming couplets and a refrain, with each line
sharing the same meter
say fourteen lines using any of a number of formal
rhyme schemes, in English typically ten syllables per
line
say a humorous, frequently bawdy, verse of three long
and two short lines rhyming a-a-b-b-a, popularized
by Edward Lear
say nineteen lines with two rhymes throughout,
consisting of five tercets and a quatrain, with the
first and third lines of the opening tercet recurring
alternately at the end of the other tercets and with
both repeated at the close of the concluding quatrain

I often enjoy the experience of going through a poetry title by a press I admire, but a poet I’ve never heard of, which is, admittedly, often the case with American publisher Krupskaya, but particularly relevant to a conversation of Eric Sneathen’s Snail Poems (Krupskaya, 2016). Bay Area poet Sneathen’s debut, Snail Poems, is composed as a book-length elegy; composed in fragments, bursts and stand-alone lyrics in an epistolary mode, held together by the thread of elegy, mourning the death of a close friend, and speaking to a shared politics that drove them to the Peace Corps, and what he can do, still, after her death. As he writes as part of a post-script:

I listen to poets and I march when I’m able—not heroically, mostly quietly, in an ellipsis of my own. It seems I wave distantly to the others, even when we’re together in a line watching fireworks on the freeway. Or in the middle of the street, I walk back and forth across a median and put my hands on cars honking terribly. There are those flashes and momentous surges of what is happening so exquisitely, it is like a future. I have a vision—is this my rage? I expose myself to something troubling in the language—is this my rage? I hold it out to you—slowly, so slowly—and I write it down. My pockets filled with seditious confetti, I don’t stop. Even asleep, it’s where I can see her still. I can attend to the slow death that suddenly blossoms as the individual death. The tragedy. I take what I can of her back into our streets. 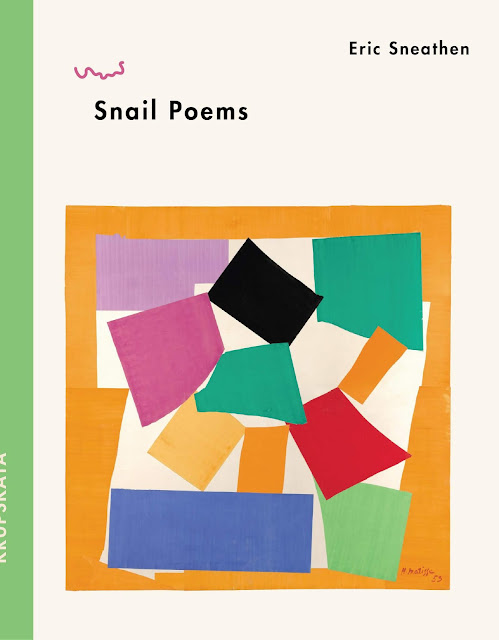 The poem-fragments of Snail Poems are powerful, rich and heartfelt, and feel composed as a single, book-length lyric thought, examining friendship, grief and a multitude of other aspects of living, breathing and what comes next. His structure feels akin to a catch-all, open to anything and everything in terms of subject matter, moving through fragments as diary entries, journal entries, and lyric expositions on life and the universe to the smallest domestic frivolity. “say the beaks of birds,” he writes, in the first section, “you name it, stronger even than / a spider’s silk, the teeth of sea snails [.]” This is an impressive, understated lyric, the strength of which is immediate, powerful and stunning.

after your passing, we stormed the discotheque
the jefferson of rue patrice lumumba
melanie did the worm, slapping her breasts into spilled
drinks and specks of glass and i have no doubts
you would have loved us
as we were furious and out of control
while i was fucking wasting my time and eating
undercooked popcorn and watching b-movies
like the remake of the women and my favorite
under the tuscan sun i was crying
about verb tenses and what was left of them

yesterday you were my snail and
today if you are a snail
and i pretended you died
just pretended
what would that mean to a snail?

curling back inside yourself, no limbs for me to tickle
or manner of spooking you further away from me
a mere helix shell i shake like a magic eight ball
and try again later

Posted by rob mclennan at 8:31 AM
Labels: Eric Sneathen, Krupskaya