What’s the matter with you

I remember my back pressed hot into the sandbar one second before my brothers pour water from red buckets onto my tanned belly and I jump up screaming. Exactly one second later I downplay my reaction to not give them the satisfaction. It’s a game of pretend I continue for a lifetime. Elif Batuman in The Idiot writes, “It can be really exasperating to look back at your past. What’s the matter with you? I want to ask her, my younger self, shaking her shoulder. If I did that, he would probably cry. Maybe I would cry, too.” We regulate our responses to be likeable thereby rendering ourselves weak and undesirable. Only to ourselves, though, only ourselves.

Flourish (Toronto ON: ECW Press, 2019) is Vancouver poet Jacqueline Turner’s fifth poetry collection, after Into the Fold (2000), Careful (2003), Seven Into Even (2006) and The Ends of the Earth (2013), all of which have been published by ECW Press through editor Michael Holmes. Some of the poems in Flourish are reminiscent of certain works by Margaret Christakos, Rachel Zucker or Anne Carson for their own lyric explorations, composing poems as small studies, and allowing different levels of the personal and interpersonal into the body of their poems. The poems of Turner’s Flourish, predominantly a book of prose poems, utilize an exploration of language as its base, and the materials of her life as the means through which she makes those explorations. We might even compare the idea to similar structures of language exploration Vancouver writer George Bowering utilized in his Autobiology (Vancouver BC: Georgia Straight Writing Supplement, 1972), but Turner’s, while writing out a number of remembrance single-stanza prose poems, is more conscious of reading and writing, source materials and the composition of the poem-essay. Turner writes out memories around her children and of them growing into adulthood, memories of her own childhood and siblings, and the low expectations put upon her (as a girl growing up in the 1980s, and into the 1990s), and of her experiences moving into and through emerging author, of “a desire constructed for me by books and also television.” (“New York Intellectuals”). As part of a 2013 interview, Turner spoke of the beginnings of the manuscript:

I’m working on a new manuscript called Flourish because I’ve spent quite a lot of time on dealing with the ends of things so I thought it would be good to explore how language operates when things are going well. I like the idea of an exuberant text so I’m experimenting with letting the writing break open and burst forth. The rush is an element I’ve used formally in my writing — the rush of the long line prose poem — as well as the mode of compression where language is put under pressure in short imagistic stanzas, so I guess I want to see what’s between the extremes of concision and excess. 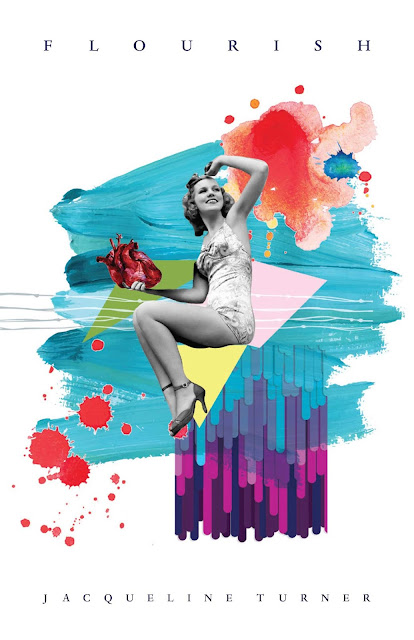 Set in five sections—Flourish: Studies,” “New Nostalgia” “Flourish: Poems” and “Flourish: Declarative Sentences”—the title of her first section suggest writing as a field of study, and her prose poems do come through in a rush; one that appears highly considered, each word and phrase weighed before set on the page, but with such an ease of flow akin to a sudden release of water. What becomes curious is in the title of her third section, highlighting and specifying “poems” in a section where the pieces included aren’t prose poems or prose sections, but shaped in the more traditional structure of lyric poems. As the poem “‘Texts against images and vise versa’” opens:

a clipping, a letter is all there is
at the start of things

Flourish is a collection that works to take stock, looking forward, back and at the present moment, attempting a sense of placement, of movement, striking out with every source of information she can muster, from the source materials of her own memories to that of her own reading. Flourish is a celebration of the present, even as she works to take it apart, so that she might better understand it. “The parts of a whole are indicated in partial modes of remembrances.” she writes, to open the poem “Putting the World in a Box”: “Loss is a continual gesture of nostalgia.”

I don’t but I know people who do. Fully formed ideas fall out of their mouths with captivating hooks, building action, and a clever return back to the beginning just as they are winding down. People who verbally process their experiences do not like to be interrupted. They are likely to barrel over interjections unless I’m so uncharacteristically forceful that I can’t be reasonably ignored. Their resulting exasperation is palpable enough that I almost feel bad for trying to take up space with my fragmentary hesitative speech parts. bpNichol wrote, “The mouth remembers what the brain can’t quite wrap its tongue around & that’s what my life’s become. My life’s become my mouth’s remembering, telling stories with the brain’s tongue” and I also feel beholden to “the brain’s tongue” – trying to find language for what continually slips from memory, yet insists on its messy present moment anyway. Internal reverie strangles but slides. The momentary um “what my life’s become.”