A ship arrives in the middle of a downtown city
intersection. Although there is no port, people
depart the wooden ship with family belongings
stuffed into suitcases, saying, “So this is the New
World. Who knew it would take this long to arrive?”
Men and women walk past them on sidewalks,
staring into phones, cursing some inner lack.
The newly disembarked hold hands, begin to sing
a hymn forbidden in the land of their ancestry.
All around them, skyscrapers reflect clouds, loom
above them to move along, or he will ticket them
for an unlawful assembly. Where are your permits?
Children hide in the long skirts of young mothers
caressing their golden hair. Was this the land they left
the old country to find? Their leaders urge caution.
Maybe they should reboard the ship for the night?
but the captain has pulled up the gangplank. The ship
is sailing away without them. Evening draws its veil
as a kettle of people tightens around the newcomers.
They begin to chant. Assimilate! Assimilate! 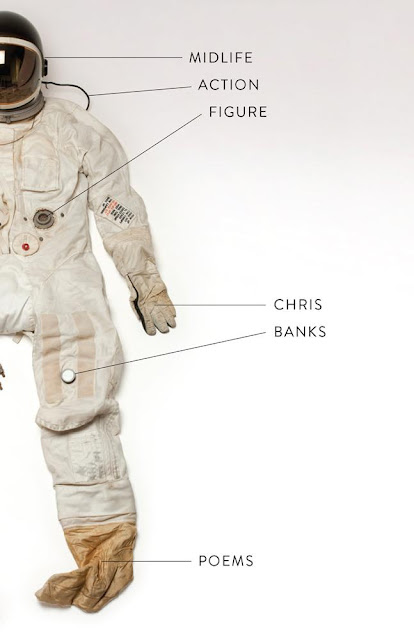 I’m fascinated by the poems in Waterloo, Ontario poet Chris Banks’ fourth full-length poetry collection, Midlife Action Figure (Toronto ON: ECW Press, 2019), a book that follows his Bonfires (Gibsons BC: Nightwood Editions/Junction Books, 2003), Winter Cranes (ECW Press, 2011) and The Cloud Versus Grand Unification Theory (ECW Press, 2017). The poems are densely thick and incredibly rich, akin, somewhat, to a lyric molasses in which a reader is caught up in an unexpected lyric flow. Perhaps molasses isn’t the right word, but the comparison suggests a thickness, and a poetry in which one can’t easily pull away from. Set in three numbered sections, his poems are big poems (although each averaging a page in length) wrestling with big ideas and big questions, including, as he writes in “Big Questions”: “Twenty years on, why keep / making art?”

As the title suggests, the collection explores that nebulous idea of “midlife,” although one that isn’t necessarily one fraught with anxiety or even resignation (although both are present, as threads, through), but more as a curiosity around and exploration of mortality. Consider, also, that (according to an interview Rob Taylor conducted with Banks for PRISM International, posted October 12, 2017) the original title for the manuscript was “The Book Of The Dead For Dummies.” In numerous poems, he offers a variety of specific questions and statements on writing and poetics, something he has done in previous works, opening the poem as much as a poetic as a sequence of expositions, from “Most days / writing a poem is like watching a pot waiting / to be filled.” and “This is an honest / poem, and even it is on the grift.” from “Honesty,” or “Someone’s handwritten / notes in the margins: Love this one! Huzzah!” from “Reading So-and-So’s Selected Poems in a Used Bookstore,” to “I wish I could tell / you I am the only one in this poem” from “Kintsugi.” Banks’ poems are a kind of lyric collage, each poem set as an accumulation of queries, statements and observations on writing, pop culture, family, society, the human disconnects that media and the internet furthers, the crisis of climate change, mortality and just about everything. Banks offers his thoughts and observations from the intimate to the spiritual to the quietly mundane, all of which wraps itself around the question of survival, and how we might navigate and exist in the world as responsible and healthy humans. How did we get here, and where are we going? How is it even possible to exist during these times? His poems offer an optimism, but one that has been battered around for some time, and one that begins to question itself. “Beauty rewrites its own code.” he writes, to open the poem “Simulation”: “The authentic / is another souvenir most people throw away.”

No one wants the good china. Meet me
at the safe house. Pry up a few floorboards
and you are sure to find an old beer bottle.
Who wants my head on a platter? Pencil in
time for friends and enemies. The billet-doux
was lost in the move. Life is not packed
in Styrofoam. I’ll take a riot over the ho-hum.
Devastation over racketball. I will sign
your petition if you will sign mine. Change
should not require forms. My resentments
come in transcripts. Joy in hot pink neon.
Do you want the egg-salad or the gospel?
Own up to your hurts. My style is foreign
so the heart suffers. Obligations possess me
until I feel like a rolled-up tube of glue.
How did I get stuck in this meat locker?
At least, I have Dante and Beyoncé to keep
me company. Careers are scams. I am waiting
for the next great crusade. Let it be sharing
our inner lives. Tapestries of secrets. The
past declassified, and still parts omitted.
Who needs to be a prisoner of blue skies?
Ante up on hope, and I will double down
on happiness. Fly your banners. I give you
my assurance of a promised march over lands
full of payday loans, corporate retreats. Let me
put my armour on. This takes several years.