I’m impressed with the carefully-precise density of Los Angeles, California poet mai c. doan’s full-length debut, water/tongue (Oakland CA: Omnidawn, 2019), an exploration on loss, trauma, being, ritual, cultural identity and history, and the crushing impossibility of forced cultural assimilation, one that displays itself through, among other traumas, pure erasure: “women were on the frontlines of / rebellion against 247 years of the first Han Chinese occupation of / Viet Nam, fighting for their freedom and autonomy, in the end / when faced with defeat, drowned themselves in the river.” Prompted by “the shock of her grandmother’s suicide,” doan provides voice and weight, composing a powerful lyric on death, matralinearity and cultural acknowledgement. As the poem “4:00 am:” reads:

until the dead is swept up
off the floor

doan writes in simple, short fragments on death and her grandmother, and family and cultural histories that can’t help but thread together, and through her own body, sketching out her poems through such understated, weighted fragments in a way I haven’t seen outside of the work of Toronto poet Souvankham Thammavongsa [see my review of her latest here]. There is such care and heartfelt precision in doan’s water/tongue, a full-length book as much as it is a single, book-length suite on her grandmother, and the enduring resistance of generations of women to a variety of oppressors, from culture to language to patriarchal to the unknown and even unseen. As part of the second section reads: “BEFORE Chinese occupation brought Confucinism / BEFORE French colonialism brought cows / BEFORE U.S. empire brought capitalism [.]” In an interview with doan conducted by Phuong T. Vuong for Timber A Journal of New Writing (posted May 20, 2018), doan responds:

My exploration of family and history is grounded in fragmentation, loss, and imagination. Because of things like war, premature death, colonialism, assimilation, and language loss, there is no “whole” story to tell. There is a lot that doesn’t exist in the English language (yet) and there is a lot that has never been articulated. When I am writing, I am attempting to articulate with everything I have in me, in all of the languages I know and that come naturally. This includes silence and spaciousness.

In water/tongue and much of my writing, space is what allows me to tell a truer story; it’s what allows me to reflect the experiences I am trying to represent in a way that feels most honest for me. Space is as much text as the words that are written. And in some ways, there’s a lot more that is yet to be revealed or that has yet to be imagined in those spaces. Silence isn’t always empty or quiet. In fact, it usually can be quite loud and overflowing. I feel similarly about the space between text in my book. 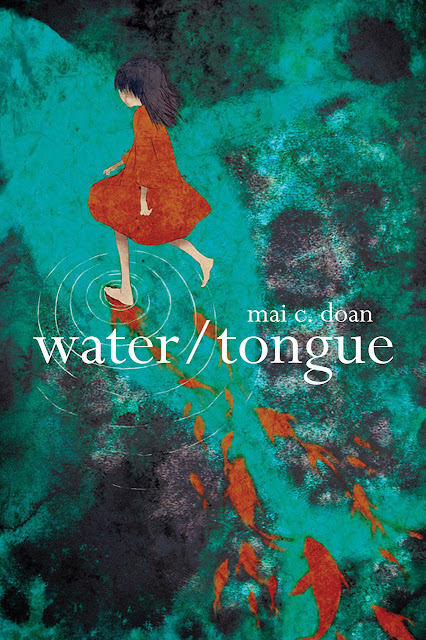 Part of the power comes for how soft she treads, how lightly she manages to articulate such heavy material, as doan writes in her “Afterword”:

to write things that have never been verbalized, that have never existed as a verbal recollection, telling, or memory. only as silence. only as physical symptoms. truth is deeper and more multidimensional than what is just said aloud. full of rage and sharpened teeth. i’m not sure what it means to attempt to make a narrative out of pieces that have never been connected outside of my own body. to discipline an ever evolving constellation into something linear and legible. i tried my best to keep my stories free, and yet still to write. to write beyond and in spite of any norms to tell suffering as something weak and digestible.