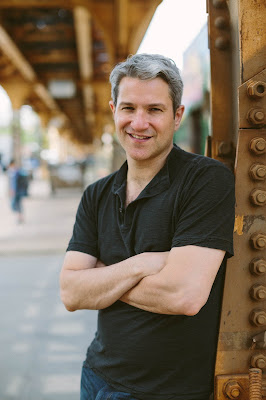 Stuart Ross is the author of Jenny in Corona, available for pre-order from Tortoise Books. His work has appeared in Diagram, Eclectica, HTML Giant, pioneertown., The Awl, Vol. 1 Brooklyn, and other places. Follow him on Twitter and stuartmross.com.

Jenny in Corona is my first book. Publishing a book is scary. A lot of mixed feelings. You’re throwing this big party and you hope people crash it.

2 - How did you come to fiction first, as opposed to, say, prose or non-fiction?

Fiction is hopeful. There’s a line in Jenny in Corona about a man who dreams of a human creature unable to shed blood. That’s the power of fiction.

Writing is the only disease that makes the patient pray for outbreaks.

Jenny in Corona began with the scene when Jenny strikes Tyrone out and she tells him “one day you’re going to meet another me, but it’s not going to be me, and that’s going to suck for me.”

I am the sort of writer who enjoys doing readings. I grew up with slam poetry suicide in the schoolyard and screaming Italians at home. My Harvard and Yale.

I’m not an astrophysicist, so no theoretical concerns. But I think a lot about that line in Dylan’s Nobel speech: “The Pequod is the name of an Indian tribe.” It sounds like a line of poetry by Eileen Myles.

Jenny in Corona is not only about a man’s education, but about a man who wants to be educated. Tyrone says, “I learn too many things I don’t want to learn because knowledge isn’t a separatist.” I agree with his theory of knowledge. Most adults stop learning. Most adults are very good at this, even though they’ve stitched thousands of couch pillows to the contrary. I mistrust people whose stories hold together. Maybe the role of the writer is to pull apart stories.

A great editor is every good book’s mistress. Jerry Brennan, who edited Jenny in Corona,  brought new ideas to the manuscript and made it better than it was before.

The writer John Weir once told me directly: Stuart, you’re a writer. Sorry. Write or don’t write. Either way you’re going to be miserable. I was eating a burrito at the time.

I usually write in the morning. Writing is easy. The hard work happens during the day, trying not to overwrite the morning.

Inspiration is a good word. The stalled-ness is part of the work. I turn toward the stalled-ness. And poetry with a lot of white space. Listen to Kendrick or Conor.

The detergent aisle in a red state supermarket.

I agree with Mr. McFadden. Books come from books. But copper comes from Arizona, peaches come from Georgia, and lobsters come from Maine.

Own a fall wardrobe.

I asked my friend Billy how the hell you answer this question, and he said people love it when you say, “I suck at everything else.” Imagine if you could test that. Like you found out Michael Chabon is not only a great writer but also invented the E-ZPass.

John Michael Vlach’s Barns. Barns were the first highway billboards. The site of production and advertising. A combination of two Saxon words: bere (barley) and aern (place). Early on, the barn became a standard point of reference for measurement. Anything huge was said to be “as big as a barn”, anyone who made an errant throw was criticized as “not being able to hit a barn.” In 1848 a group of northern politicians earned the nickname of “barn burners” for their opposition to slavery expansion. It originated from a farmer who tried to solve his rat infestation by burning down his blameless barn. A cartoon of the day showed Martin Van Buren, who quit the Democratic party to run on his own ticket, putting a torch to his barn while the extant Democratic presidential candidate jumps off the roof along with the other party rats.

The Last Black Man in San Francisco was the last great film I saw. I go to film for slow drama, for representations of male friendship, for depictions of how men are betrayed by other men. For me, film is a spectrum of men keeping their cool.

I am in that fevered state between books. If roads permitted, I’d drive a Buick to Antarctica.