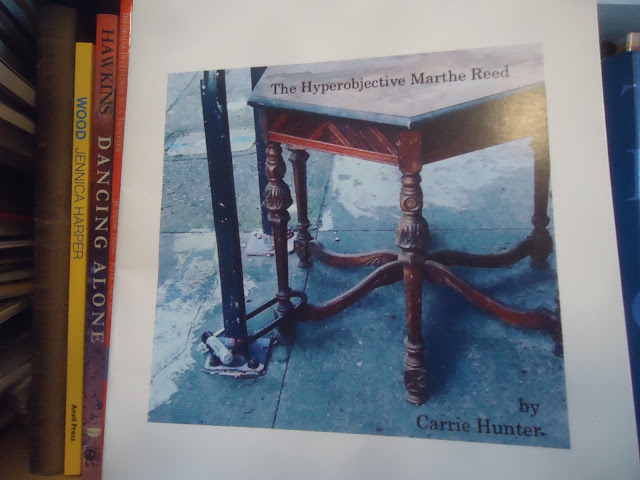 Further to the latest iteration of the dusie kollektiv [see my prior notes on chapbooks by Bronwen Tate and Elisabeth Workman from the same kollektiv here; on C.S. Carrier and Adra Raine here; see the link to my own chapbook here], here are a couple of more chapbook-length works solicited by dusie maven Susana Gardner, produced in/as homage to the late American poet, editor and publisher Marthe Reed.

St. Charles MO: From poet gillian parrish comes cold spell (April 2019), a project, she writes, that began “in January 2015 shelved until January 2019, as other projects kept the roof overhead, as all the while life for our kin in the arctic keeps declining. The work was taken up again in answer to a call from DUSIE for chapbooks by Counter-Desecration anthology contributors written in honor of editor Marthe Reed and her call for work that acknowledges that ‘there is no safe distance,’ work that lives ‘somewhere inbetween self and other, near and distant, paradoxical poles resolving moment-to-moment… Meeting place.’” cold spell focuses its gaze on the north, on the chaos of climate change on the landscape and the wildlife, writing diminishing fragments and a staccato pulse along the path, writing out what has already been lost and what will soon also be lost: “come muskox come / with your curved horns / goat-hooved / nimble come singing / the old cold songs / pack back the ice / press it back in place / cool the world [.]”

Yellow eye for summer, blue for winter. To see at the end of the spectrum, sight sliding into scent. You scry in ultraviolet light; wolf piss and wolf fur, the filigreed lichen named for you, filling the forest floor, ghost corals, branching antlers, luminescent heedless one. Teach us to see in the dark. Knee-clicker, river-runner. You make the track, you are the map, become the drum. Teach us to be eaten. How the body is an offering. Snow-shveler. Forager. How will you feed through the ice? For we’ve made the rain start falling at the wrong time. A bad rain falling like glass. Far-ranger. Fog-bringer. Our old seers climbed the sky inside your skin. Become the drum to stop our dreaming. Trail-maker. Watcher. At the limits of our vision.

San Francisco CA: From Californian poet Carrie Hunter comes The Hyperobjective Marthe Reed (April 2019), a collection of exploratory lyric collages shaped as a single, chapbook-length poem. Throughout the collection, she weaves in a myriad of quotes from John Ashbery’s FLOW CHART: A Poem (Knopf, 1991), as well as from Marthe Reed’s essay, threading a series of observations and questions on mythology, ecology, memory and meaning. Ashbery’s FLOW CHART is constructed as an accumulation, what the Los Angeles Times referred to as “a book-length poem of more than 5,000 long Ashberian lines, which makes it one of the longest poems ever written by an American poet. All of the qualities of Ashbery’s recent poetry are here in amplitude or excess, depending on your point of view.” Hunter extracts from Ashbery’s excess to move in a multitude of directions simultaneously, while pushing a thesis built on accumulation and collage, utilizing as springboard into, around and through her own thoughts on human responsibilities to and around climate disaster. “Who survives is no better than who does not;,” she writes, “it’s just incidental.” Hunter’s is a large canvas here, and I would be curious to know if this project is self-contained in this form, or might become larger (it certainly has that potential). To end the poem “Like Hebe to the Rainbow’s Gauzy Showers,” she writes:

The “wildflowers in the wallpaper.” Taking it more internal than is meant. Not wildflower wallpaper, but a hybrid form of two thing which would never be hybridized.

“Presto, no one was there.”

Memory of the ecosystem (genitive) collides
with lacunae of the individual.

Another empty room.
What Joan said too.
Ornery purgative exodus.
The father, and disobediences.
An injunction, chamois costume,
what about when it’s really too late.