You reject turmeric, saying it is bitter. But my favorite color.

I keep driving. Cinnamon is meant to be loved.

No thanks nutmeg, eggnog knock whose there. Cartooned. Cart on who. Yolk.

I tell you of eating raw garlic cloves. Anyone would do that because garlic has antibacterial properties. Anyone has a sore throat. It’s a sinus the times.

Let me access your amylase. Pull-over halfway from picket pentameter. I become a neighbor without sugarless cups. I pocket jalapeno wine.

When you trace my perimeter with ice, it does nothing. Jarred salsa is in my corner.

I’m taken with how the poems and narrative in Brazilian/Texan poet Vanessa Couto Johnson’s [see her “12 or 20 questions” interview here] full-length debut, pungent dins concentric (Tolleson AZ: Tulsun Books, 2018) slowly unfold, nearly unfurl, through her book-length suite of short lyrics. Organized in three sections—“Figure 1: Stimulus,” “Figure 2: The necessity of time for sound” and “Figure 3: For a common center, shape”—her poems exist as small studies or sketches that accumulate into a kind of sketchbook of concerns, filled with family, domestic matters and immediacy of home, but composed with a musicality and sequence of unexpected lyric turns. Johnson writes out her days and moments in unusual ways, collecting an assemblage of influence, random thoughts and ideas into a kind of book-length, bopping thread. As well, the poems here display an openness of sound and word association that bend her narrative lines very much in the manner of one thought immediately following another and yet another, through to conclusions concurrently unexpected and entirely familiar, such as the poem “longhand,” that includes:

When you ask me if I want a real drink, you mean Old Country Time Lemonade. So far and yet so glucose. My thirst is purer, more ancient. The same as the one on each continent.

The Bile is the longest river in the liver system, leading to a delta of lipids. What’s your favorite choler. Mine yellow. 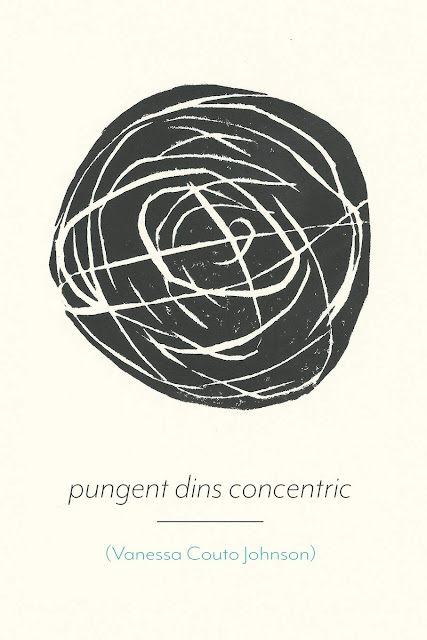 As her title suggests, the poems here all share the same centre, resonating outward, but just as much, a book-length thread that connects and coheres the poem into a singular unit, a suite of lyric examinations on curiosity, bafflement, connecting disconnects and trains-of-thought, sound and simply exploring the possibilities of how far out the poem can go, while still remaining part of something far larger. There are echoes of the work of Canadian poet Pearl Pirie here (a poet I haven’t a clue if Johnson has even heard of, let alone read) for Johnson’s play of language shifting meaning, collaging and colliding to quickly bounce and shift, especially through lines such as these, from her poem “sidereal,” that write:

Eight morals or molars in my mouth. I will not recant, but tell of when I saw Captain Kirk with Plato’s stepchildren.

Air resistance is futile to fertile. Living to fall to mulch approval. Flowers and followers to their beds.