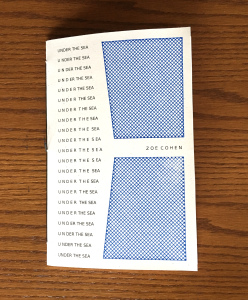 Adjunct Press is a chapbook press from Milwaukee. We make hand-stitched books and use all proceeds toward making future books.

Alice Ladrick is the author of Don’t Read This If You Already Want To Die. Her poems have been published in various journals, including Radiactive Moat, Word Riot, Vector, and Verse Wisconsin. Her essay on translating Gertrude Stein into Old English was published in Post-Medieval. She lives in Milwaukee, where she co-edits Adjunct Press.

Jonny Lohr is a poet and bookmaker from Milwaukee. He is the author of multiple chapbooks, including Peak 2018 Poems, Spheres, and an untitled forthcoming collection of essay-fragments on Karl Young. He co-edits Adjunct Press and works in a union print shop, IBEW local 2150.

1 – When did Adjunct Press first start? How have your original goals as a publisher shifted since you started, if at all? And what have you learned through the process?

Adjunct started a few years after we’d both finished our poetry schoolings. We were wanting to stay connected to the poetry world, but also didn’t want to have to care about the po-biz things we’d always found tedious. Our original goals, as implied by the name Adjunct Press, were to actively emphasize the tenuous nature of our generation of poets within the professional and social structure of late-academia. I think this drive is still in place, but as we’ve become further disconnected from the academic world, a removal of that structure seems more just built in. The majority of those we’ve published are now outside of poetry academia and its fun and interesting to have a poetics of people who love and write poetry when it has nothing to do with their jobs.

Jonny has experience doing more DIY zine-type poetry stuff, including the short-lived Scharmel Iris Vanity Press. Alice took book-making classes during her MFA. It’s been a good mix of backgrounds that helps us play around.

I don’t know that I believe in any overarching roles of small publishing, I think each press has their own goals, whether explicit and implicit. I do think there’s a responsibility to act ethically in all levels of publishing, especially small press. The poetry world is unfortunately one where abuse is rampant and ignored by the larger structures, such as academia or more-institutionalized publishing apparatuses. When you hear about an abuser, often they use their power over someone’s ability for future publication. Small publishers need to use whatever platforms they have and be willing to vocally support victims and to call out abusers and to remember even after the now-standardized institutional amnesia has kicked in.

I think we do an interesting job of attempting to stretch the usual goals of a chapbook. We’re trying to make a beautiful object for the writing, but one that doesn’t distract from the writing. Jayme Russell’s PINKpoems is probably one of the more confrontational book designs, with blinding pink stock and a glitter cover that sheds all over its surroundings, but even this works with the text, not in place of it.  We’ve attempted to work thematically with last year’s Retail Labor Series releases. Our recent release Mall Is Lost by Holly Raymond stretches the usual definition of “chapbook” by being almost “full length.”

God, we wish we knew. We try to be upfront with our authors that we are horrible at promoting. We have an Instagram with cute cat photos. We’ve also been copying Bloof Books and posting pictures of the bookmaking process to try to drum up excitement.

We generally don’t do any line-editing for our poetry. We’ll check if we have any questions on possible typos or layout issues with the typesetting. We had to correct a Bible verse citation for an upcoming book. Last year we published some essays that required more editorial decisions.

We do print runs of 50 books. We give the author 20 copies and sell the others through our website. We ship them through US Postal Service. We also give a few copies to Woodland Pattern and one copy to the UW-Milwaukee Special Collections Library.

Almost all the work is done by Alice and Jonny. Our two cats offer moral support. A few times our friends helped with some stitching, but, since we are unable to offer any payment and we’re over-controlling, we mostly do it ourselves. We’ve been able to bring all the means of production in-house, so we’re able to do it at our own pace. 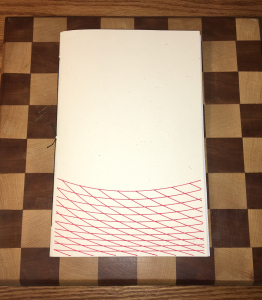 We both are drawn to the chapbook as an ideal size for a poetry collection. It’s difficult to write poems without the idea of a chapbook in mind.

We’ve both released chapbooks under the Adjunct Press name. Jonny has an ongoing productivity prompt to write and self-publish a chapbook every year. He does this outside of the press name just so that the website isn’t over-crowded with his name. Contemporary poetry publishing has such important history with self-publishing that it would be silly to turn one’s nose up at it

11– How do you see Adjunct Press evolving?

So far we’ve only published people we know from Milwaukee or school, which has limited our output to our social circles. Later this year we want to start doing open reading periods to bring more voices.

Last year we put out a chapbook of Xu Lizhi’s poems. Xu Lizhi was a Chinese poet who committed suicide while working at the infamous Foxconn factory. The translations for the poems had been put out by an activist group in China and we contacted them and got permission to make a print edition of their translations. I believe this is still the only US book publication of his work.  This also points to the frustration in our ineptness at promotion because we’ve only sold a fraction of the 100 copies we made, and this has to be based to our inability to inform people about it. We also are donating proceeds from sales to the IWW General Defense Committee, so we feel like we’re failing this important work and an important organization, but are unsure of how to proceed.

Bloof Books and Compline were huge, and both Shanna Compton and Michael Cross have been very generous with their time and advice. Also goals were Punch Press, Horse Less Press, Delete Press, LRL Textile Series, those old indestructible Spork Press books, and the first generation of The Song Cave chapbooks.

14– How does Adjunct Press work to engage with your immediate literary community, and community at large? What journals or presses do you see Adjunct Press in dialogue with? How important do you see those dialogues, those conversations?

We’re lucky enough to live a few blocks from one of the best poetry centers in the world, Woodland Pattern. In Milwaukee there’s a resurgence of an active local poetry community and we try to be active as best we can. We worked with local organizers to edit and print a zine of protest poems to raise money for the local IWW General Defense Committee. I’d like to think ourselves in dialogue with Doublecross Press, Elderly, Fact-Simile, Oxeye Press, and pity milk press. 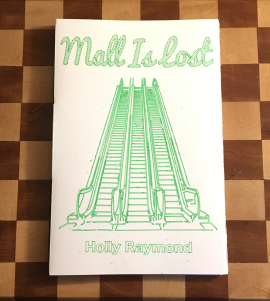 We’ve only had one reading in our existence. Again, with the bad at promotion. We would like to work on more IRL fanfare during our releases to give our authors a proper launch. Many of our writers live in different states and we don’t travel to events. We do like to offer more author copies as needed for people to do their own launches and readings.

We primarily exist online. As mentioned above, we try to use our Instagram to get peoples’ attention to the releases and most of our sales are through our website. It’s also helped us get ideas for publications. We wanted to publish Ginger Lukas’ essay on cake-making because of some great photos she’s posted on facebook a few years back.

We want to start taking submissions later this year. We’re still figuring out the best way to go about this, but can’t foresee any limitations thus far.

Jim Chapson is an icon of poetry, coming up as a poet in the Bay Area scene in the 1960s and helping to shape Milwaukee’s poetry scene for nearly 50 years. His poems in this collection are  sardonic and bittersweet.

Mall is Lost is a maximalized epic of late-capitalism simultaneously taking place in a late-medieval town and a contemporary dying mall.

Zoe Cohen, Under The Sea

Under The Sea, part of our retail labor series, is an essay on the losing of self within commercial alienation. Oh, and it’s about selling t-shirts and shells to drunk tourists in the Florida Keys.