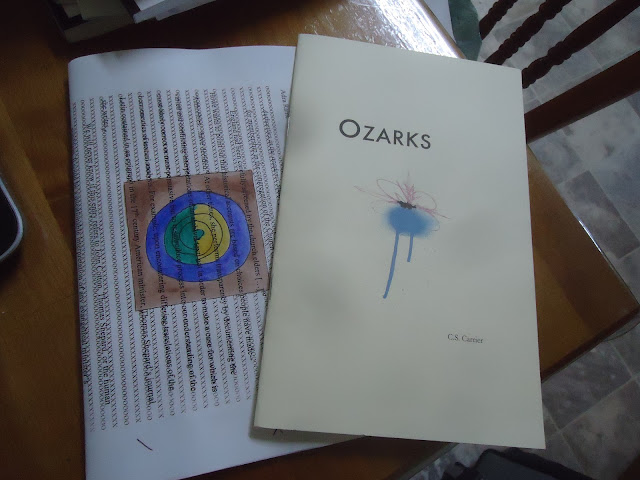 Further to the latest iteration of the dusie kollektiv [see my prior notes on chapbooks by Bronwen Tate and Elisabeth Workman from the same kollektiv here; see the link to my own contribution to the project here], here are a couple of more chapbook-length works solicited by dusie maven Susana Gardiner, produced in/as homage to the late American poet, editor and publisher Marthe Reed.

Western AR: From poet C.S. Carrier comes the self-produced Ozarks (April, 2019), a short, ten-poem sequence that opens with a quote from Reed herself, from her essay “‘somewhere inbetween’; Speaking-Through Contiguity,” the afterword to Counter Desecration: A Glossary for Writing within the Anthropocene (Wesleyan, 2018), a collected co-edited by Linda Russo and Marthe Reed: “Transitional to hyperobjective reality, places serve as loci of human connection to the complex ground of our being, capable of affording access to that ‘somewhere inbetween’ self and other, near and distant, paradoxical poles resolving moment-to-moment into contiguity. Meeting, place. In these more local, immediate contexts, experiences of interconnection—beneficial, destructive, neutral—manifest and can be grappled with in concert with knowledge of large-scale phenomenon, each informing the other.” I like how Carrier opens with the quote from where Gardiner’s prompt originally came, holding to the foundation of the solicitation, and opening his own poem with:

I’m taken with this short sequence, composed as short, nearly point-form sketches blending the geography and flavour of the Osarks with Reed’s sense of that “somewhere inbetween,” holding a betweenness to physical and temporal place and being. I haven’t read any of Carrier’s work prior to this, but the internet informs that he “has an MFA from the Program for Poets and Writers at the University of Massachusetts Amherst and a PhD from the University of Louisiana at Lafayette. He grew up in western North Carolina and currently lives in western Arkansas,” and is the author of several chapbooks, as well as two full-length collections: After Dayton (Four Way Books, 2008) and Mantle (H-NGM-N Books, 2013).

Durham NC: From Adra Raine comes UNDISSERTATING, CHAPTER ONE: HOLLOW (April 2019), a chapbook (second printing, with revisions) produced via “a process of decomposition and recomposition. This chapbook is printed on drafts of my dissertation, ‘Resonance Over Resolution: Resisting Definition in Susan Howe, Nathaniel Mackey, and Ed Roberson’s Post-1968 Poetics.’” The effect is tangible, with the text of the work printed over liquid-papered pages from dissertation drafts and the hidden text half-set behind the poem. As she writes to open the small collection:

Finishing a PhD is like coming out of a long depression. The world is suddenly full of colors and sensation. I can breathe easier; I feel lighter.

Or maybe it is the coincidence of spring. Everything is blooming.

Or maybe I’m pregnant again. I am easily moved to tears.

I’ve started taking a new route to pick up my child from school, cutting through the parking lot of a college campus that is always nearly empty of cars. There is a single tree planted in the middle of the otherwise unoccupied concrete ground – young, still growing, alone.

The pages of the chapbook hold a curious weight, given the amount of liquid paper (which also means the pages occasionally stick together). The chapbook holds a weight of multiple layers, even to the suggestion of sodden, writing journal entries during the lengthy process of writing a PhD and the weight of a loved one’s recent suicide.

There’s a bird outside my office with a special sound to its song. You would know what it is. You had a knowledge I associate with an aristocratic education. You knew the names of birds and trees and flowers, you played the piano, you spoke French.

Does the “presentation of truth severed from Truth” equal a lie?

At your memorial, the subtext of your death manifest itself in many of the speeces as a desire to defend your character.

Raine is also the author of the chapbook Want-Catcher (The Operating System, 2018), which prompted a 2018 conversation between her and Operating System founder/managing editor, Lynne DeSilva-Johnson, where Raine responds:

I’m Adra Raine, I’m a writer and teacher living in Durham, NC. I grew up in Boulder, CO and lived in New Jersey, New York, Massachusetts, and Maine before moving to North Carolina in 2010 to do my PhD. Right now I’m working on a dissertation on the works of Nathaniel Mackey, Ed Roberson, and Susan Howe in the 1980s-90s while teaching writing and literature at UNC-Chapel Hill. I’m currently working on a manuscript about parenthood in late capitalism titled Wonder Weeks, of which Want-Catcher is the first chapter. I have a closet full of super-8 film footage that one day I hope to edit into a series of short films to add to the small handful I’ve finished. I own an iPhone. I watch a lot of television shows. I listen to music on Spotify. I wake up around 6am to nurse my toddler who starts our day about 45 minutes later, so I’m very sleepy by about 8pm every night. I’m currently taking a break from social media except for tracking events and local b/s/t posts. I’m an introvert, but as a Leo, I want everyone to love me. I’m still an INFP (I thought maybe I wasn’t anymore). I don’t believe or not believe in astrology and the Meyer-Briggs personality types, but in my culture they are part of how we understand ourselves. I still struggle with the residual effects of the internalized misogyny I’ve spent much of my thirties throwing off. I grew up in an upwardly mobile middle-to-upper-middle class home in the 1980s in a hippie town where I attended a progressive, multicultural, bilingual school that I was surprised to discover was not representative of the world, or even of the town, but was “experimental.” I worked for seven years in “non-profit” contemporary art spaces, where I met a lot of great people and learned to be suspicious of cultural institutions. I avoid and resist forms of competition that pit one person’s livelihood or wellbeing against another. This is a struggle when you live in the belly of global capitalism. My writing and ideas are not copyrighted.