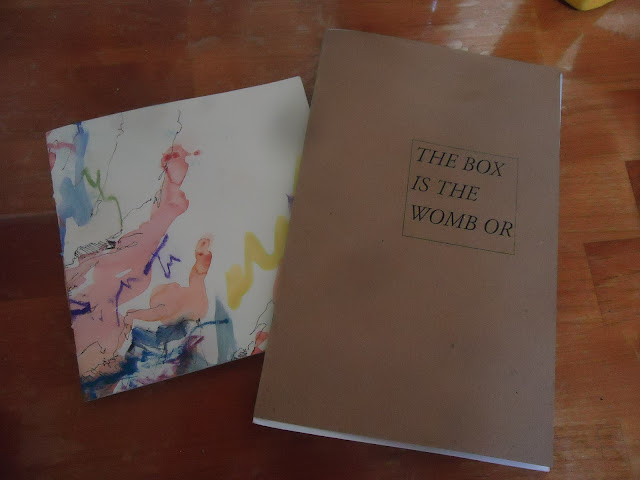 A couple of months ago, Dusie-maven Susana Gardner solicited a number of poets for the ninth Dusie Kollektiv, soliciting poets to produce chapbooks in homage to the late Marthe Reed [see my obituary for her here], aimed for an event in her honour—“Somewhere in the Cloud and Inbetween,” A Tribute to Marthe Reed—at the most recent edition of the annual New Orleans Poetry Festival. While some chose to produce theirs as pdfs-only (pdfs for all of the chapbooks will eventually appear on the Dusie site; see previous kollektivs here), there were more than a few (including myself, here) that produced physical chapbooks as well. Here begins the first of my notes on those chapbooks participants have been generous enough to send along:

Vermont: I’ve been enamoured with the work of Vancouver-born American poet Bronwen Tate (raised in Portland, Oregon and moved variously around the United States before relocating north to Vermont not that long ago) for some time (she’s an interview soon over at Touch the Donkey), so was very pleased to see a copy of her Mittens (2019), a chapbook subtitled “Songs & Patterns.” As with her above/ground press chapbook, Mittens focuses on her immediate, from writing to her domestic, composing lyric bursts of self-contained poems that accumulate gracefully into a sequence on the precariousness and preciousness of living, being, parenting and writing:

Repetition seeps in even while precarity ebbs. Ebbing, the tide completes half its burden. To move forcefully, then, to travel even with the difficult small children, out of the span of habit, to an unfamiliar shore. Shored by discipline, still seeking the sweep of vision. All perceptions in the flush of arrival flawed, partial. Partial, bites from a browning apple. My reflection, then, unwashed hair and tired body, is belated, obscured, unfaithful. Faithful now, I trust to the future self who will revise.

The author of a handful of previous chapbooks, including Souvenirs (Dusie 2007), Like the Native Tongue the Vanquished (Cannibal Books 2008), Scaffolding (Dusie 2009), if a thermometer (dancing girl press 2011), The Loss Letters (Dusie 2011) and Vesper Vigil (above/ground press, 2016), I’m a bit surprised she hasn’t a full-length title out yet, but am confident it is simply a matter of time.

Think of a mitten: useful in its season, warm, shaped by its purpose. Tear out what’s gone wrong, the remnant kinked by its former shape. Soak, lie flat, return. If it’s hard, do it every day. Think of a bowl left outside—it can’t help but collect the rain when it comes. Hold still. Fill and overflow.

Minneapolis MN: From poet Elisabeth Workman comes THE BOX IS THE WOMB OR (2019), a poem-essay, as she writes in her colophon, that appeared “in a slightly different form” in the anthology The End of the World Project, eds. Richard Lopez, John Bloomberg-Rissman and T.C. Marshall (Moira Books, 2019). She writes: “It was Marthe who connected me to the project, and though this chapbook may be more of a reiteration of the prompts for this Kollektiv, it is ‘staying with the trouble’ that seems in kinship with Marthe’s poetics.”

THE BOX IS THE WOMB

(the box is her womb) Among the Greek writers who feared the void, women, and poetry: Hesiod is writing in the 7th century of Pandora who is sent down to punish men….Hesiod calls Pandora the first of the species, a separate species from men. The myth in our English ideology comes armed with a box, but in Greek what she comes with is a pithos and pithos is the Greek word for jar. Now, the Greek had a though that a woman’s womb was shaped like a pithos, so really what Hesiod is talking about here is Pandora being made the first woman comes with a first womb and when inevitably that womb gets opened and the opening of course is from intercourse, what flows out is all the evils of the world.

I’m really taken with this extended poem-essay, and am curious as to whether or not it is part of a longer project (as it easily could be). This piece is vibrant, provocative and striking, and has even further relevance, given the terrifying and needless assault on women’s reproductive rights and choices currently moving throughout parts of North American (Georgia, Ontario, etcetera). Exploring the language and history of women and women’s bodies, THE BOX IS THE WOMB OR sits as both a remarkable poem and a worthy tribute to the work of Marthe Reed.

I was vexed at an angsty point in my life the first time I watched Bela Tarr’s The Turin Horse. If you’ve seen the film maybe you had the experience too of a kind of restless body syndrome while watching its slow black-and-white expression (a cruelty in itself) of the long tail of cruelty. How it comes back. How you have to eat it. How it’s yours. How ourosboros. For weeks after the experience, and even now in just thinking about it, the repetitive rhythm of the windstorm that courses throughout the entire film comes to mind and by mind I mean my entire body.